labor Women in Iceland to Leave Work at 2:38 PM

Women in Iceland strike over the gender pay gap. The first Women's Day Off was held on October 24, 1975. While the gap is closing, it would take another 50 years at the current pace in order to achieve parity. 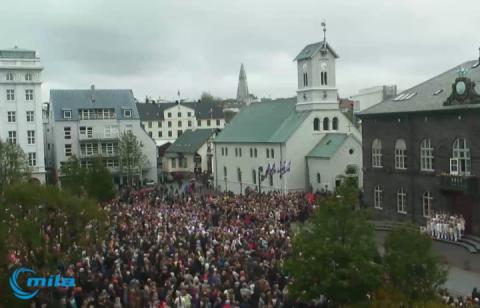 , Screenshot from mila.is
Women in Iceland are encouraged by unions and women’s organizations to walk out of their workplaces at 2:38 pm today. In Reykjavík, they will convene on Austurvöllur square, where a program begins at 3:15 pm to protest the gender pay gap in Iceland. Similar protests are planned all over the country. The timing, 2:38 pm, is no coincidence. Compared to men’s earnings, women work without pay after that hour every day.
The fight for equal pay is nowhere near over: Based trends in the past decade, it appears it will take 52 years to eliminate the gender pay gap in Iceland. Today, women will demand equal pay now for similar work.
Women’s Day Off was originally held in Iceland on October 24, 1975. That day, tens of thousands of women in Iceland left their work and gathered in downtown Reykjavík to bring attention to their large role in society. October 24, 2005, Women’s Day Off was celebrated for the second time, RÚV reports. That day, women walked out the minute they were working for free compared to men, or at 2:08 pm. In 2008, they walked out at 2:25. In eleven years, less than three minutes have been gained a year in narrowing the gender pay gap. Thus, if the same trend continues, not until 2068 will women and men enjoy equal pay.
Gylfi Arnbjörnsson, president of ASÍ, the Icelandic Confederation of Labor, told RÚV today that for 60 years, it has been illegal in Iceland to discriminate based on gender. Wage contracts assume that people are paid based on education and type of job, but not based on gender.
“No one puts up with waiting 50 years to reach a goal,” Gylfi stated. “It doesn’t matter whether it’s a gender pay gap or any other pay gap. It’s just unacceptable to say we’ll correct this in 50 years. That’s a lifetime.”
Update: The headline of this story was changed from “Icelandic Women to Leave Work at 2:38 PM” to “Women in Iceland to Leave Work at 2:38 PM” in response to readers’ comments, pointing out that there are many migrant women who work in Iceland in addition to Icelandic women.
ALSO: Read about the 1975 Iceland Women's Strike here.