The Nobel Committee Got It Wrong: Ngugi wa Thiong’o Is the Writer the World Needs Now

"When I first heard about Bob Dylan’s selection for the prize, I wasn’t concerned that the award had gone to a musician; I was disturbed that the committee had demonstrated an apparent obliviousness to the times we are living in. The US is saddled with a presidential candidate who peddles in misogyny and appeals to white supremacists. In many other countries, neo-liberals are vying with the far right for power, and the left is at its weakest." This decision felt myopic. 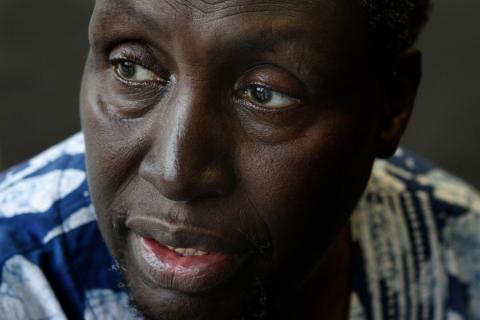 Every year I root for Ngugi wa Thiong’o to win the Nobel Prize for literature.

The Kenyan writer has been a favorite to win for years. This year, according to gambling site Ladbrokes, the odds were 4-to-1 in Ngugi’s favor, with Haruki Murakami second at 7-to-1, and Don DeLillo at 12-to-1. Had Murakami or DeLillo won, I would have been disappointed. Ngugi’s novel “Wizard of the Crow” was a 700-page masterpiece that seemed to invent a genre of its own, in between satire and magical realism, yet it had far fewer readers outside of Africa than “The Wind-Up Bird Chronicle“ or “Underworld,” though it is a work of equivalent stature.

When I first heard about Bob Dylan’s selection for the 2016 literature prize instead of Ngugi, I wasn’t concerned that the award had gone to a musician; I was disturbed that the committee had demonstrated an apparent obliviousness to the times we are living in. Alfred Nobel directed that the prize be awarded “in the field of literature [to] the most outstanding work in an ideal direction.” “Outstanding work” refers to literary merit, and “ideal direction” to values, indicating a role for the prize in shaping humanity’s outlook in each given year.

In October 2016, the United States is saddled with a presidential candidate who peddles in misogyny and appeals to white supremacists. In many other countries, neo-liberals are vying with the far right for power, and the left is at its weakest. In light of all of this, the Nobel committee’s decision felt infuriatingly myopic. This was the year we needed a writer like Ngugi.

The last time the Nobel was given to anyone outside the field of literature as conventionally understood was in 1953,when the recipient was Winston Churchill, a decision the committee justified by referring not only to his “mastery of historical and biographical description” but also to his “brilliant oratory in defending exalted human values.” This was, presumably, a reference to his wartime rhetoric, though one wonders whether he would still have won had knowledge of his crimes against Britain’s former colonial subjects been more widespread.

This is the importance of Ngugi. Born in 1938, the son of a tenant farmer in rural, British-occupied Kenya, Ngugi grew up working the pyrethrum farms that were once the property of his ancestors. He came of age during the Mau Mau rebellion, followed by the Churchill government’s violent ​response, which included​ the detention of 150,000 Gikuyu people in concentration camps where they were electrocuted, whipped and mutilated. He vividly describes this period in his novels “Weep Not, Child,” the first East African novel published in English, “A Grain of Wheat” and “Petals of Blood.”

Later, when he turned his attention to the betrayal of the Kenyan people by the new ruling elite, he was jailed without trial and wrote the first modern novel in Gikuyu, “Devil on the Cross,” on prison-issued toilet paper. He followed this with “Decolonising the Mind,” in which he argued that Africans should write in their native languages as part of the drive for liberation from the mental shackles of colonialism.

Ngugi’s decision to move away from English was a brave one for a writer hailing from Africa, a continent frequently treated as irrelevant by the rest of the world. It could, in fact, have led to his disappearance from the global stage, but instead it solidified his reputation as a writer of supreme political commitment, though few of his contemporaries or juniors took up the call to write in their native languages. Ngugi’s attitude toward this, however, is markedly self-aware and flexible.

“We of the elder generation,” he told the New African three years ago, “are so bound up by our anti-colonial nationalism, which is important for us but the younger generation ― they are free. You find they don’t confine their characters necessarily to Africa. They are quite happy to bring in characters from other races, and so on … that’s good because they are growing up in a multicultural world.”

It is this ability to free himself from fixed positions that has enabled Ngugi to remain politically relevant. “Wizard of the Crow” is set in the fictional Free Republic of Aburĩria and features a megalomaniacal dictator known only as the Ruler. It is a critique not only of existing figures but also of political power itself, at the core of which he places patriarchal oppression. The novel is written with a radiant, comic hand, compassionate toward ordinary folk, satirical toward the Ruler and his henchmen, and, as Maya Jaggi stated in her review for the Guardian, “remarkably free from bitterness”  — vital if a writer is to remain contemporary, and impressive for one exiled from his homeland for 22 years.

Such a rich body of work is of potentially tremendous importance to our understanding of how the world came to be as it is. Ngugi captures the progression from the raw plunder and violence of colonialism to the corruption of national Third World elites by the predatory forces of global capitalism, which he cheekily represented in “Wizard of the Crow” by the fictional global bank.”

Since the publication of “Wizard of the Crow” in 2006, Ngugi has written three volumes of memoir, returning to the periods he covered in his novels. The first, “Dreams in a Time of War,” begins with his grandparents during the time of the Berlin Conference of 1885 when the European countries divided Africa up between them, then tells of his own childhood as a landless laborer. The second, “In the House of the Interpreter,” tells of his years at a British-run boarding school near Nairobi when, during the Mau Mau rebellion, his family home was razed to the ground and his brother imprisoned in a British concentration camp. The third volume, “Birth of a Dream,” recounts his four years at Makerere University in Uganda as Kenya approached independence and Ngugi began to write his first works of literature.

It would have been a progressive decision to have given Dylan the prize 40 years ago (and from his non-responsiveness to the award announcement, one suspects Dylan might even agree with this), but in 2016 the world is at a critical juncture in terms of our awareness of fascism, neo-imperialism and white male supremacy, and the Nobel committee ought to have recognized this. Though no novelist can possibly reach as many people as a musician of Dylan’s fame, we still need to honor literature’s role in shifting our awareness and mobilizing our actions, and of all the contenders for the Nobel this year, Ngugi’s voice is the most urgent. As he himself wrote in 2005: “Written words can also sing.”

Rajeev Balasubramanyam is an award-winning novelist with a PhD in black and Asian British literature. His latest book is called “Starstruck.” He is on Twitter at @Rajeevbalasu.