Slavery, Democracy, and the Racialized Roots of the Electoral College

Race and racism in the U.S. context have long served as some of the most significant guarantors of democratic structures and institutions. In short, U.S. democracy itself is a racial project whose fulcrum hinges on policies of inclusion and exclusion. 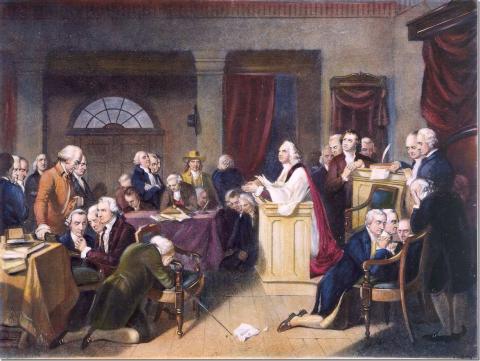 At 11:45 p.m. on November 6, 2012, Donald Trump tweeted that “the electoral college is a disaster for a democracy.” Four years later, at 2:31 a.m. on November 9, 2016, the Associated Press projected that Donald Trump would win the state of Wisconsin and therefore surpass the required 270 Electoral College votes to become President-elect. The AP tweeted: “Donald Trump is elected President of the United States.”

Though Hillary Clinton defeated Donald Trump in the national popular vote, Mr. Trump is now President-elect based on the indirect representational nature of the Electoral College. There is nothing particularly novel about this latest (un)democratic contradiction—it happened in 1876, 1888, and 2000—except that it opens up a critical space for examining the racialized genesis of the Electoral College itself.

In the aftermath of any presidential election, statisticians aim to index the demographic features of the electorate. We have learned, for instance, that Hillary Clinton won 88, 65, and 65 percent of the Black, Latino, and Asian-vote, respectively, and that Donald Trump captured 58 percent of the white vote. We also know that the white vote—especially unprecedented support from white women—put Trump over the top. While these isolated figures are certainly important for diagnosing electoral trends and prognosticating future turnout, they tend to prevent us from considering the historical roots of so-called colorblind instruments of U.S. democracy like the Electoral College.

To be clear, this critique of the racialized origins of the Electoral College should not be interpreted as the cheap product of disappointment over the most recent election results, but rather as an effort to tap into what will likely be a short-lived public appetite for presidential politics in order to explore how U.S. political institutions are themselves always already racialized. To be sure, race and racism in the U.S. context have long served as some of the most significant guarantors of democratic structures and institutions. In short, U.S. democracy itself is a racial project whose fulcrum hinges on policies of inclusion and exclusion.

Perhaps unsurprisingly, the provenance of the Electoral College, to paraphrase Ronald Takaki, is grounded in questions of racialized ‘insiderism’ and ‘outsiderism.’ To this end, the Electoral College is responsible for the fact that four of the first five U.S. presidents were white, slave-holding men from Virginia. The “Virginia” variable is key here, as Virginia held the largest population of enslaved black men, women, and children from the inception of the “peculiar institution” until the passage of the Thirteenth Amendment.

In 1787, white men of status met in Philadelphia to draft the Constitution. Questions of elections, taxation, and governance, among others, were debated vigorously. One of the most contentious themes considered over the course of the four-month convention was by what process to elect a president.

Two months into the meeting, Pennsylvania lawyer James Wilson proposed direct election of the president. Some delegates lamented that an “uneducated” populace would be incapable of the sort of self-governance required to ensure a salutary direct democracy. Such an elitist concern, however, was not what occupied the minds of most delegates, and especially those from the South. James Madison—a slaveholder from Virginia—worried that such a system would compromise the political influence of the slaveholding South, a region of the country that on a eligible voter population-basis would nearly always lose to the North in a direct election system. Madison opined: “There was one difficulty however of a serious nature attending an immediate choice by the people. The right of suffrage was much more diffusive in the Northern than the Southern States; and the latter could have no influence in the election on the score of the Negroes. The substitution of electors [through the Electoral College] obviated this difficulty and seemed on the whole to be liable to fewest objections.”

In a direct election system, the North would have outnumbered the South (which had a large population but far fewer eligible voters), whose roughly 550,000 enslaved black people were disenfranchised. Delegates from the South generally supported Madison’s idea of the Electoral College over a direct election system because it was based solely on population volume, not citizenship status or enfranchisement. In conjunction, and at Madison’s urging, the convention agreed to count each enslaved black person as three-fifths of a citizen for the purpose of calculating each state’s representation in the Electoral College and in the allotment of congressional seats.

Colonial Virginia won big under the Electoral College system: the state occupied 12 of the 46 electoral votes (26 percent) needed to win an election in the first round. (As a reference point, such disproportionate overrepresentation would be tantamount to present-day California enjoying 70 electoral votes.) Whereas the Electoral College artificially enhanced the political influence of the South, it deflated the political influence of the North. After the 1800 census, for instance, Pennsylvania had 10 percent more free persons than Virginia, but had 20 percent fewer electoral votes. According to legal historian Akhil Reed Amar, “Perversely, the more slaves Virginia (or any other slave state) bought or bred, the more electoral votes it would receive. Were a slave state to free any blacks who then moved North, the state could actually lose electoral votes.” Simply stated, the Electoral College incentivized the institution of slavery; it was created to protect and propagate the enslavement of black people. The Electoral College operationalized the 3/5ths compromise and helped to secure, extend, and enhance the political power of the white slaveholding class whose epicenter at the end of the eighteenth century was Virginia.

The contentious aftermath of our most recent presidential election should challenge us to ask some inconvenient questions about the racialized nature of our political institutions and to rethink the propriety of the Electoral College, a retrograde political apparatus whose origins in slavery and anti-black racism challenge the radical proposition of “one person, one vote.”

Christopher Petrella is a Lecturer in American Cultural Studies at Bates College. His work explores the intersections of race, state, and criminalization. He completed a Ph.D. in African Diaspora Studies from the University of California, Berkeley. Follow him on Twitter @CFPetrella.