The "Women's March on Washington," Explained

It could be the biggest mobilization yet in response to a presidential inauguration. March organizers hope that the work of the march will reach far beyond January 21. The work of this march is not only to stand together in sisterhood and solidarity for the protection of our rights, our safety, our families and our environment - but it is also to build relationships and mend the divides between our communities. 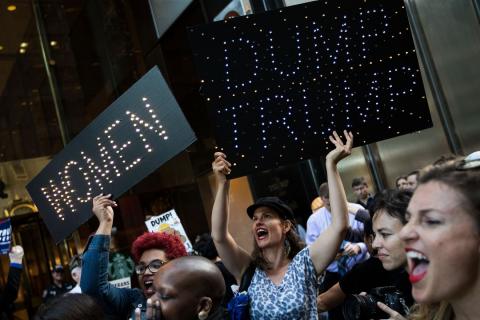 Donald Trump's victory over Hillary Clinton came as a shock to many — and for many women who opposed Trump in particular, Clinton’s loss was personally devastating. But in the days since the election, desperation and fear have swelled into a plan for action: a “Women’s March on Washington” on January 21, the day after Trump’s inauguration and the first full day of his administration.

What started as a viral idea on social media has snowballed into a potentially massive event, with more than 100,000 people already saying on Facebook that they plan to attend. It has the potential to be the biggest mass mobilization yet that America has seen in response to a presidential inauguration — about 60,000 people protested Richard Nixon’s 1973 inauguration at the height of the Vietnam War, and thousands protested George W. Bush’s 2001 inauguration.

But while the Women’s March has been an organic, grassroots effort, it has also been a chaotic one at times. For a while, it seemed doubtful that the march would actually come together in a successful or safe way.

Sure, lots of people didn’t want to waste the plane tickets they bought in hopes of seeing the first woman president sworn in — but would it really be worth it? Could the necessary permits be obtained in time? Would it just be too much to handle logistically, given how chaotic DC tends to be during inauguration weekend? Would it be safe, given the current political climate and given how often large Trump events incite violence? And even if it all worked out, what would it actually accomplish?

Now that professional organizers have taken the reins, it looks like the logistics will come together, although the broader impact remains to be seen.

But the huge, spontaneous groundswell behind the march says a lot about this moment in American politics. It’s another sign that Trump could spark a new golden age of activism on the left. And it’s a sobering reminder of why that might be the case: People are genuinely afraid for their civil rights under Trump, and women in particular could have a lot to lose.

Why a women’s march?

The march “represents women and people who identify as women, of all backgrounds, races, religions, ages and abilities,” according a press statement from organizers.

Men are also encouraged to participate, though. “We welcome our male allies,” Bob Bland, one of the first women to organize the march on social media, told the Washington Post. “We want this to be as inclusive as possible while acknowledging that it’s okay to have a women-centered march.”

The event is being promoted as a “march” or a “rally,” but emphatically not a “protest.” Organizers say that the march isn’t anti-Trump — rather, it’s an affirmative message to the new administration that “women’s rights are human rights.”

“Women’s rights are human rights” really shouldn’t be a controversial or politically polarizing statement. But it’s also a famous line from Hillary Clinton’s 1995 speech on women’s issues in Beijing, and it’s pretty obvious that the march is motivated by worries about how women and their rights will be treated under Trump.

Many women were horrified that America chose Trump, an alleged sexual predator over Clinton, who could have been its first woman president, and that an obviously unqualified man beat out an obviously qualified woman.

Especially for women of color, queer and trans women, and women who belong to other marginalized groups, a Trump presidency could present an existential threat: from a Justice Department that could roll back major civil rights gains, to families being torn apart through mass deportation, to Muslim women feeling too afraid of hateful acts and violence to wear the hijab and freely express their religion, to drastic reductions in access to reproductive health care that would disproportionately harm poor women and women of color.

“The rhetoric of the past election cycle has insulted, demonized, and threatened many of us — immigrants of all statuses, Muslims and those of diverse religious faiths, people who identify as LGBTQIA, Native people, Black and Brown people, people with disabilities, survivors of sexual assault,” a statement from organizers reads. “The Women’s March on Washington will send a bold message to our new administration on their first day in office, and to the world that women's rights are human rights.”

How the march began, and how the organizing effort evolved

According to organizers, it all started with one Hawaiian grandmother who invited 40 of her friends to march on Washington with her. Then those friends invited their friends. Then the idea went viral after it spread to the huge, secret, pro-Hillary Clinton Facebook group Pantsuit Nation.

Several different Facebook pages popped up to coordinate plans to descend upon DC. "It's the most organic thing you’ve ever heard of," Bland, a New York-based entrepreneur, fashion designer, and activist, told DCist.

Soon, Bland joined with other activists to consolidate their Facebook pages and unite their efforts. A loose organizing structure emerged — one big Facebook page for the national event, plus a page each for all 50 states for locals to coordinate transportation and lodging.

The march quickly faced some pushback over issues of diversity and inclusion. For one thing, Bland and all of the other original organizers were white women. And the original proposed name, the “Million Women March,” was scrapped — partly because there was already a “Million Woman March,” attended by hundreds of thousands of black women, in Philadelphia in 1997. Using that same name seemed a bit appropriative to many organizers and potential attendees.

Now, though, three prominent women of color who are experienced activists and organizers have joined Bland as national co-chairs of the event: Tamika D. Mallory, Carmen Perez, and Linda Sarsour. Together, the three led a march from New York City to Washington, DC, in 2015 to demand changes in America’s criminal justice system.

The “Women’s March on Washington” name is a definite nod to the 1963 March on Washington where Martin Luther King Jr. made his famous “I Have a Dream” speech, and organizers say they are committed to the six principles of Kingian nonviolence.

What began as a viral outcry on Facebook now has an official coordinating committee, complete with press contacts, working with the national co-chairs to pull everything together.

There are still plenty of details to be worked out, including the exact time and location, route, and program. Fundraising and organizing for travel and other logistics are being handled at the state and local level, organizers said, so anyone who wants to learn more about joining the march should check out the Facebook pages for both the national march and for their individual state.

Organizers promised in a press statement that “there will not be any issues with securing necessary permits,” and that a program “featuring nationally recognized artists, entertainers, advocates, entrepreneurs, thought leaders, and others will be announced in the coming weeks.” They’re also working on recruiting larger organizations to join the effort as coalition partners.

As far as safety is concerned, the Women’s March “has a team of experienced and professional national organizers working to ensure that every safety protocol is followed.” More details on safety will be released as the date draws closer.

And the four national co-chairs say they hope that the work of the march will reach far beyond January 21. “The work of this march is not only to stand together in sisterhood and solidarity for the protection of our rights, our safety, our families and our environment — but it is also to build relationships and mend the divides between our communities,” the co-chairs said in a statement. “It’s hard work, and it will be ongoing.”