In 2012, President Obama passed DACA, a legislative policy to ensure that certain undocumented immigrants to the United States who entered the country before their 16th birthday and before June 2007 receive a renewable two-year work permit, a Social Security Number and exemption from deportation. Donald Trump has vowed to end DACA once he enters office, making hundreds of thousands of young people fearful of deportation and that their education could be in jeopardy. 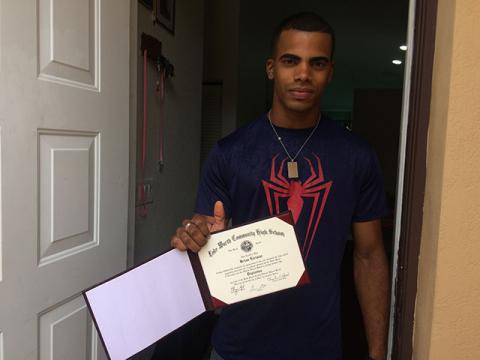 Brian came to the US from the Dominican Republic when he was nine. He stands with his diploma from Lake Worth Community High School. He didn't have or engage with the proper supports in high school that could help him apply for the in-state tuition waiver, Photo: Lena Jackson
At age 13, Marco traveled with his grandmother, sister and uncle to Miami. Fleeing persecution in Guatemala, he traveled via Mexico to the US for a better life. Even without legal status, he prefers living here.
Marco is now one of thousands of undocumented students attending college in the United States. Born in Mixco, a province outside of Guatemala City, Marco began his journey from Guatemala to the United States in January 2010. During childhood, he was pushed around and bullied at school and in his neighborhood. He was being raised by his extended family because his father left to work in the US in 2002 and his mother followed shortly after in 2004. By the time Marco would arrive in Florida, he had spent half his life living apart from his parents.
Upon arrival in Sonora, Mexico, Marco and his family had to wait several weeks for their coyote to make proper travel arrangements, which involved arranging for two children with mobility disabilities (13-year-old Marco and his 8-year-old sister) to be transported over the wall that separates Mexico from the US. In order to get Marco over the wall, the coyote and Marco's uncle wrapped a blanket around him and lifted him up and over. A car was supposed to meet them in Nogales, Arizona, but it never showed up. Instead, Marco and his family were apprehended and taken to the local Immigration and Customs Enforcement (ICE) station. He described the cell that his family was put in that first night as being large, packed and cold. Like thousands of other immigrant detainees, they were forced to stay in a hielera, or icebox, cells that are kept at freezing cold temperatures in ICE detention facilities.
Self-portrait of Marco. (Photo: Marco)Self-portrait of Marco. (Photo: Marco)Within a week, Marco and his sister were placed with a Mexican-American foster family in Texas. His uncle and grandmother were both deported back to Guatemala. The Lutheran Immigration and Refugee Service helped arrange the temporary foster placement, schooling and a plane ticket to Miami where they would be reconnected with their parents after nearly a decade of separation.
Marco spoke no English when he entered 6th grade at a local middle school. He was in ESOL (English for Speakers of Other Languages) classes for the next two and a half years. By 9th grade he was able to enroll in regular classes, by 10th grade he enrolled in honors classes and as a junior he took an AP class. 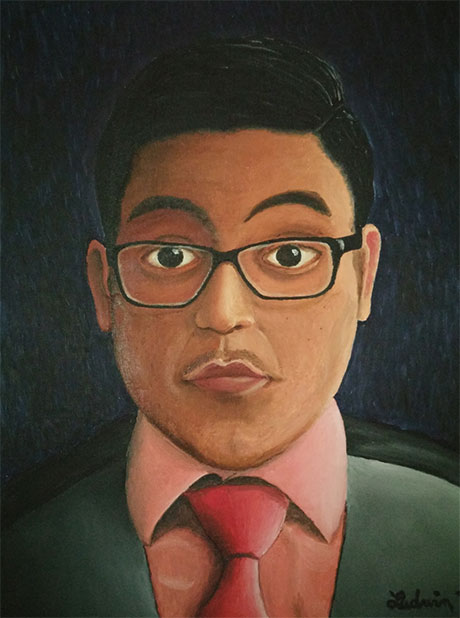