labor Towards a Working-Class Environmentalism

The environmental movement has somehow become synonymous with elite technocratic liberalism. That doesn’t have to be the case. 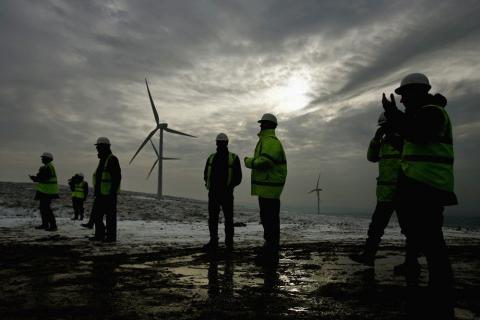 The 2016 election was cataclysmic for environmentalists. Despite the record global warmth of 2015 and early 2016, environmental issues played almost no role in the election (no question about climate change was asked in the three presidential debates). Major environmental groups lobbied heavily for Hillary Clinton, and her loss left them with an actively hostile President-elect Donald Trump. The appointment of climate skeptic Myron Ebell to head Trump’s Environmental Protection Agency transition team bodes very poorly for the future. Trump has not yet nominated a secretary of the Interior, but the nominee will likely be someone who is devoted to promoting the aggressive energy development of the nation’s public lands, while showing active hostility toward land preservation, endangered species protection, and aggressive pollution controls.

The state of American environmental policy would have been unthinkable to environmentalists four decades ago. Environmentalism, once a bipartisan movement with tremendous political power to pass sweeping legislation with almost no organized opposition, is now a mere interest group in the Democratic Party. It is locked in a running battle with often hostile courts to maintain past gains, and is often seen as a threat to jobs by working Americans. What was once a popular movement now pushes a technocratic elite agenda with few connections in the American working class. Understanding and changing this is critical to building a popular political movement that again appeals to average Americans.

When environmentalism began as a popular movement in the 1960s, it succeeded for two primary reasons. First, Americans were experiencing a poisonous, toxic environment. Although early 20th-century conservation created national parks and placed the national forests under federal control, corporations could largely pollute as they did a century earlier. Cities like Pittsburgh were as notorious for their air pollution in 1960 as in 1890. Second, Americans believed themselves economically secure and thus environmental protection was not seen as a force that could cause any real economic damage.

Rachel Carson’s exposé of pesticide use in her 1962 book Silent Spring began the modern environmental movement, leading to the ban on DDT in 1972. The 1969 Cuyahoga River fire in Cleveland and the Santa Barbara oil spill that same year led to widespread outrage over American environmental depredations. Legislation passed through Congress by what are now unthinkable majorities: The 1970 Clean Air Act passed the Senate without a single vote against it. The United States was becoming a green nation by popular acclaim.

This began to change after 1973. The postwar economic boom came to a crashing halt. Globalization began to make itself felt, with the outsourcing of American jobs. As a result, working class support for environmentalism began to wane. Employers began blackmailing unions into opposing environmental legislation, claiming they would close their factories and move to Mexico if a given law passed. The 1980 election of Ronald Reagan brought a new hostility to environmentalism in the White House. Greens responded to Reagan’s radical agenda by turning to wealthy liberal donors who could fund their lawsuits against the administration, and these donors were more ready to open their wallets with appeals to cute charismatic animals and deforestation in the Amazon, rather than reports of how pollution was affecting people of color or working class whites in Appalachia.

At the same time, environmentalists did not take strong positions on the issues affecting working class Americans. Automation and outsourcing, both of which have decimated the American working class, did not concern the movement. When industrial production left the United States for Mexico and Asia, greens largely celebrated the cleaner air and water Americans were able to enjoy. But the environmental impact of that production shifted overseas, with horrifying pollution exposure in China, India, and Mexico.

By the late 1980s, when environmentalists sought the end of logging in the Northwest’s ancient forests, many activists had open contempt for the loggers who feared for their jobs, telling them to work at Walmart. Radical greens affiliated with groups such as Earth First! drove metal spikes into trees, nearly killing one millworker, which only reinforced the opinion among the loggers that environmentalists did not care about them. Contemporary unions have reinforced this belief among the working class, with Laborers International Union of America (LIUNA) president Terry O’Sullivan notoriously condemning environmentalists for their opposition to the Keystone XL Pipeline and other dirty energy projects his members would build. O’Sullivan is wrong here—a planet where humans can’t live won’t have union jobs either. But at the same time, with high-paying working class jobs disappearing in this country, who can blame O’Sullivan for grasping at any job he can get for his underemployed members?

Environmentalism’s reputation as a rich white social movement will have enormous negative consequences. A few years ago, I was in Cleveland to talk to environmental justice activists who were trying to organize mostly African Americans in the city’s poorest neighborhoods. As many scientists, historians, and environmental justice scholars have noted, climate change will disproportionally affect the poor, which in the United States means predominantly people of color. Working class Americans who lack air conditioning die in heat waves; higher temperatures in cities lead to cockroach infestations, which lead to high asthma rates; and scorching inner city heat islands lead to heat strokes. Despite these facts, the people in Cleveland who saw these presentations responded that climate change reminded them of polar bears drowning. Until environmentalists can effectively address the concerns and anxieties of working-class Americans, it will remain on the political sidelines.

Green groups must also throw money and energy into fights like the poisoning of the water supply in Flint, Michigan. Not only should it be lobbying and publicizing this criminal action by Michigan Republicans, it should build on it to support a new clean water bill that, in turn, demands union jobs to promote clean water for all. Environmental justice campaigns have to be waged at the grassroots level, in statehouses, and at the federal level. Centering these struggles on the plight of the working class and people of color will go far to bring the movement back to its democratic roots. The large green organizations do some of this work now, but it remains a minor part of the larger environmental agenda, much to its own detriment.

If the history of the environmental movement demonstrates anything, it is that the movement gains political support when everyday people see how it affects their own lives. Until it effectively battles the belief that environmental protection is a privilege the nation’s working classes cannot afford, the environmental movement will fail politically in its crucial goal of mitigating climate change and ensuring an ecologically sound future for humans in the United States and around the world.

[Erik Loomis is Assistant Professor of History at the University of Rhode Island. He is the author of Empire of Timber: Labor Unions and the Pacific Northwest Forests (2016) and Out of Sight: The Long and Disturbing Story of Corporations Outsourcing Catastrophe (2015).]