Quarter of Inmates Could Have Been Spared Prison Without Risk

Analyzing offender data on roughly 1.5 million US prisoners, researchers from the Brennan Center for Justice concluded that for one in four, drug treatment, community service, probation or a fine would have been a more effective sentence than incarceration. The study also concluded that another 14% of incarcerated individuals had already served an appropriate sentence. These people could be released within the next year “with little risk to public safety”. 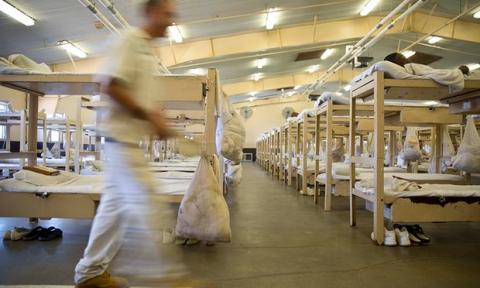 Incarceration is not the right place for so many lower level offenders in our criminal justice system, Brynn Anderson/AP

A quarter of the US prison population, about 364,000 inmates, could have been spared imprisonment without meaningfully threatening public safety or increasing crime, according to a new study.

Analyzing offender data on roughly 1.5 million US prisoners, researchers from the Brennan Center for Justice concluded that for one in four, drug treatment, community service, probation or a fine would have been a more effective sentence than incarceration.

“The current sentencing regime was largely a knee-jerk reaction to crime, not grounded in any scientific rationale,” said Inimai Chettiar, director of the justice program. “While it may have seemed like a reasonable approach to protect the public, a comprehensive examination of the data proves it is ineffective at that task.”

The study also concluded that another 14% of incarcerated individuals had already served an appropriate sentence. These people could be released within the next year “with little risk to public safety”, the researchers said. Combined, these two populations represent 39% of the current incarcerated public.

“Very long lengths of stay in many many cases do not make people safer,” said Lauren-Brooke Eisen, the lead author of the report. “Incarceration is not the right place for so many lower-level offenders in our criminal justice system. “

The study drew on data from 2012 and took three years to complete. Researchers applied a four-factor test on the effectiveness of incarceration, relative to the different types of crimes prisoners had committed. Seriousness of the crime, impact on the victim, state of mind of the perpetrator and risk of recidivism were all examined as part of the analysis. Researchers determined that for most low-level crimes, especially nonviolent drug crimes, prison was ineffective or unwarranted.

“There are so many groups trying to work to end mass incarceration but without a blueprint for exactly how you would do that, it’s really hard to make changes,” Eisen said. “We wanted this report to jump-start a conversation.”

Beyond the fact that many inmates do not pose an immediate threat to public safety, an abundance of evidence suggests that prison itself likely has a criminogenic effect on those who enter its walls. When people involved in low-level, nonviolent crimes become incarcerated, they are often placed in an environment with more unstable and violent criminals; they can become more prone to crime upon release than they would otherwise have been. Alternative sentencing strategies, including drug treatment and community service, have been shown in several studies to have the opposite effect. Incarceration also damages family, workplace and community ties in ways that often make it more difficult for people to avoid crime after release.

Eisen’s team also considered the way offenders tend to age out of criminal behavior. “The research is incredibly compelling that after a certain age, it’s very unlikely that a person would commit a second offense,” Eisen said.

Last year, for instance, Marc Mauer, a researcher and the executive director of the Sentencing Project, testified to Congress: “A 20-year-old robber is much less of a risk to public safety by the time he turns 30, 35, or 40, and this is true more or less across the board.”

The Brennan Center calculates that this could equal a cost saving of $20bn a year, greater than the combined budgets of the US departments of commerce and labor.

“Our resources are finite, and any opportunity we can have to realign those resources to find the truly dangerous people and put them behind bars, we should,” said Ronal Serpas, the former police chief of the New Orleans and Nashville departments.

A young policing leader during the crime wave of the late 1980s and early 1990s, Serpas said he understood why so many officials supported incarceration and draconian sentencing laws during that era. “I get it, I was there,” he said.

“But this is 20 years later,” Serpas added. “We don’t treat arthritis the same way we did 20 years ago, but unfortunately we’re still over-relying on incarceration the way we did back then.”