The Environmental Protection Agency has finally admitted that fracking contaminates drinking water resources in its widely anticipated final report on the practice. 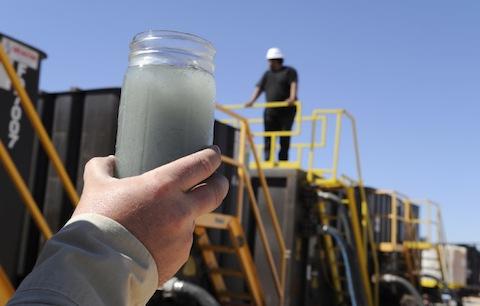 A jar holding waste water from hydraulic fracturing is held up to the light at a recycling site in Midland, Texas., AP

In June 2015, the US Environmental Protection Agency (EPA) released a draft report claiming that hydraulic fracturing, or fracking, had not led to “widespread, systemic impacts on drinking water resources,” despite significant evidence to the contrary. Scientists, experts, and affected landowners were all puzzled by the EPA’s findings considering that numerous studies, testimonies, and documentaries had linked fracking to the contamination of drinking water and even to an uptick in earthquakes. However, recent exposes published last month suggest that top EPA officials made major last-minute changes to the draft report in order to weaken the evidence of fracking’s negative effects, suggesting that this “finding” was politics disguised as science. Thankfully, over a year later, the EPA has finally reversed this dismissive statement, admitting in its widely anticipated final report that fracking does, in fact, contaminate drinking water resources.

The final report, originally commissioned by Congress, “provides scientific evidence that hydraulic fracturing activities can impact drinking water resources in the United States under some circumstances,” the EPA stated in a press release. The agency’s deputy assistant administrator and science advisor told reporters that “There are instances when hydro-fracking has impacted drinking water resources. That’s an important conclusion, an important consideration for moving forward.” The new report also includes three critical case studies that speak volumes about the dangers of fracking – Dimock, PA; Parker County, TX; and Pavillion, WY. These communities, where fracking has contaminated all of the nearby water resources, were omitted from the EPA’s draft report.

The new report identifies examples of how drinking water can become contaminated at each stage of hydraulic fracturing, including:

The new report has been widely criticized by the fossil fuel industry. The Director of the American Petroleum Institute, Erik Milito, told the Hill that “it is beyond absurd for the administration to reverse course on its way out the door. The science and data clearly demonstrate that hydraulic fracturing does not lead to widespread, systemic impacts to drinking water resources. Unfortunately, consumers have witnessed five years and millions of dollars expended only to see conclusion based in science changed to a conclusion based in political ambiguity.” Sadly for Milito and others who benefit from fracking and fossil fuels, the EPA only reversed course because the amount of scientific evidence proving the dangers of fracking could no longer be ignored.

This article (EPA’s Final Report On Fracking Confirms It Contaminates Drinking Water) is free and open source. You have permission to republish this article under a Creative Commons license with attribution to the author and TrueActivist.com