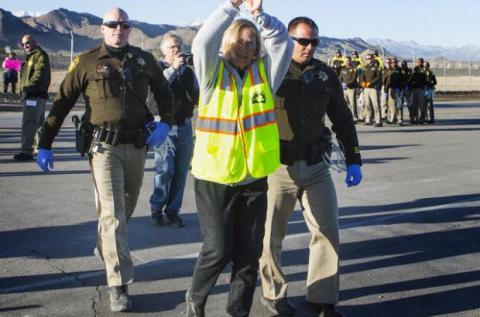 First, in 2005 and 2006 it was the Bush administration putting some of us protesting Bush's war on Iraq on the National Crime Information Data base. Yes, we had been arrested for failure to comply with orders to move from the fence in front of the White House during protests against the war on Iraq, torture at Guantanamo and other US prisons in Iraq and Afghanistan or refusing to end protests by sitting in ditches at Bush's Crawford, Texas ranch. But these were misdemeanors, not felonies, yet we were put on the FBI's international crime list, a list for felony violations.

Fortunately, Canada is the only country that seems to use the list-and they use it to deny entry into Canada. At the request of Canadian parliamentarians to challenge Canada's compliance with the Bush administration's political retaliation list, I made another trip to Canada to test it and was expelled from Canada in 2007. The Canadian immigration officer told me as he was putting me unceremoniously on the flight back to the U.S., "An expulsion is not as bad as being deported. At least each time you want to attempt to come into Canada, you can undergo 3-5 hours of interrogation answering the same questions as the last time you attempted to enter and you might get an exemption to the expulsion. With a deportation, you will never get in."

Over the past six years, I have gone through the lengthy interrogation twice and was given a 24-hour exemption to the expulsion on one occasion when accompanied by a Canadian parliamentarian and a Canadian Broadcasting TV crew filming the event, and the second time a two-day exemption in order to speak at several Canadian universities.

Now under the Obama administration, the latest effort to silence dissent, for those of you 62 or older, is someone in the government falsifying jail records to show that you were in jail/confinement for more than 30 days and sending the records to the Social Security Administration. SSA will then stop your monthly Social Security check and will send you a letter stating that you must repay back months of payments for the time you were allegedly in jail -- in my case $4,273.60.

On March 31, 2016, I, along with seven others, six Veterans for Peace and one Granny Peace Brigade members, was arrested at Creech drone base, Nevada as a part of the semi-annual protest against assassin drones. We spent five hours in the Clark County Jail as our arrests were processed and then were released. Our cases of being charged with "failure to disperse" were eventually dropped by the Clark County court.

Yet, someone submitted my name and social security number to SSA as a person who has been confined in a jail since September 2016. Without any notification to me of this allegation that would disrupt for months my Social Security benefits, SSA ordered that for my "criminal conviction and confinement in a correctional institution for more than 30 days, we cannot pay your monthly Social Security payment."

I have gone to my local SSA office in Honolulu and explained the situation. The office staff said their supervisor must call Las Vegas and get documents that I have not been convicted of a crime, nor that I am in jail or have been in jail for 30 days or more. Until then, the monthly social security checks are stopped. As we know, investigations by the government bureaucracy can take many months if not years. In the meantime, the checks are suspended.

If I didn't know better I might think this is part of the Israeli "lawfare" program in which Israel attempts to derail protests against its policies by filing bogus lawsuits that end up having to be answered in court, tying up time and human and financial resources. Since I came back in October from Israeli prison after having been kidnapped on the Women's Boat to Gaza, taken against my will to Israel, charged with entering Israel illegally and deported ...again. This is the second time I have been deported from Israel for challenging the illegal Israeli naval blockade of Gaza. My deportations from Israel now total 20 years, which preclude me from visiting Israel or the West Bank.

Stay tuned for the next chapter in this saga of our government appearing to attempt to silence dissent! Of course, their attempts to silence us will not be successful -- see you soon on the streets, in the ditches and probably even in jail!

Ann Wright is a 29-year US Army/Army Reserves veteran, a retired United States Army colonel and retired U.S. State Department official, known for her outspoken opposition to the Iraq War.