Senator Sessions’ record suggests a remarkable consistency in support of policies that contradict and subvert the Reconstruction amendments to the U.S. Constitution, which guarantee citizenship, equal protection under the law, and the ballot to all Americans. 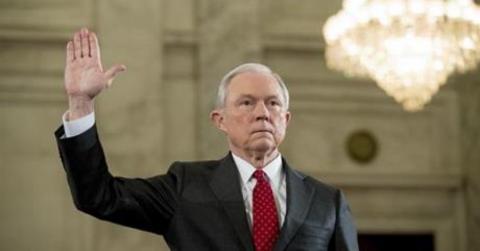 Attorney General-designate, Sen. Jeff Sessions, R-Ala. is sworn in for his confirmation hearing on Capitol Hill in Washington, D.C. on Tuesday. , AP

On Capitol Hill today, the Senate Judiciary Committee is holding confirmation hearings to consider the first of Donald Trump’s cabinet nominations, Sen. Jefferson B. Sessions of Alabama. 26 years ago, this same committee denied Sessions a recommendation for the federal bench. “Most of Reagan’s judicial appointments have been people with impressive credentials regardless of their ideologies,” the editors of the LA Times wrote. “Sessions is a different story.”

The Senate refused to confirm Sessions in 1986 because the testimony they heard suggested that he sided with his namesake, Jefferson Davis, over America’s commitment to equal protection under the law.

A quarter century later, the Senate must decide if Sessions has changed.

If the photo of Senator Sessions greeting Donald Trump’s “thank you” tour in Mobile, Alabama, alongside Southern belles in hoop skirts isn’t enough to make clear what past greatness his support of Trump hearkens back to, then the nation should listen to the question of one civil rights veteran from Alabama who asked, in the language of Scripture, “Can a leopard change his spots?”

Senator Sessions’ record suggests a remarkable consistency in support of policies that contradict and subvert the Reconstruction amendments to the U.S. Constitution, which guarantee citizenship, equal protection under the law, and the ballot to all Americans.

Indeed. The record is clear. Here are eight reasons why the Senate must reject Sessions.

If Jefferson B. Sessions were confirmed by the Senate in 2017, we would have have an attorney general who, as a senator:

The positions and policies Senator Sessions has supported do not uplift America’s shared values of love, justice and mercy.

Like George Wallace before him, Jeff Sessions is a faithful member of the United Methodist Church in Alabama. But he has not in half a century of public life demonstrated any willingness to turn from evil and learn to do good.

The positions and policies Senator Sessions has supported do not uplift America’s shared values of love, justice and mercy, despite his trappings of respectability and declarations of faith. He has neither repented of his wrongdoing nor committed to change. So we must reject his nomination and the nomination of any candidate for Attorney General who poses a threat to equal justice and the freedoms we hold dear.

When those who wield the power of the state deprive the people of these freedoms, citizens in general and the U.S. Department of Justice in particular must resist their injustice and hold them accountable. Senator Sessions is clearly unfit for the role of Attorney General.

The Rev. Dr. William J. Barber II is the architect of the Forward Together Moral Monday Movement, president of the North Carolina NAACP and pastor of the Greenleaf Christian Church (Disciples of Christ) in Goldsboro.