For nearly three years, the LA No More Jails Coalition has been organizing against the construction of a new women's jail in the city of Lancaster, California, which sits at the northern edge of LA County -- home to the largest jail system in the country. The fight has been a long one, and organizers continue to work to ensure that public funds are diverted away from another jail, and instead invested toward alternatives. 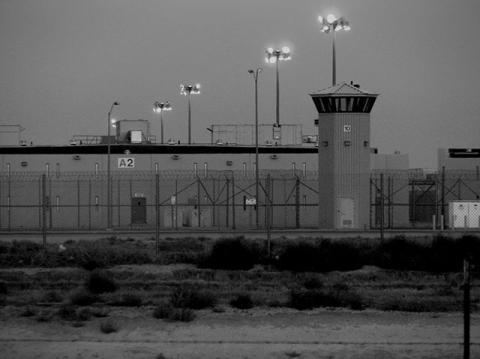 For nearly three years, the LA No More Jails Coalition has been organizing against the construction of a new women's jail in the city of Lancaster, California, which sits at the northern edge of LA County -- home to the largest jail system in the country. The fight has been a long one, and organizers continue to work to ensure that public funds are diverted away from another jail, and instead invested toward alternatives -- diversion programs that would get people released and much needed resources like stable housing, health care and education.

Despite widespread opposition, the LA County Board of Supervisors approved the environmental impact report for the proposed women's jail last month, basically saying that there are no health or environmental concerns harmful enough to stop the jail construction project. We know this to be entirely false. Organizers highlighted many issues, particularly the grave dangers of building a jail in an area known to be a "hot spot" for valley fever, an infection that can be fatal. Yet the supervisors decided that the well-being of people -- and particularly of Black women, who are more susceptible to being infected by valley fever, and will undoubtedly make up a significant portion of the jail population -- is not a priority. County officials even went so far as to deny the danger of valley fever in the area that the proposed jail is slated for, despite numerous scientific reports and testimony to the contrary.

Devastating impacts on health and medical neglect are not only issues for people in Los Angeles, or even California -- prisons and jails all over the country are toxic facilities. They will never be conducive to proper health care because they are designed to control people, not heal them. We need to get people out, stop building more prisons and jails, and invest in resources like health care that actually support communities.

Like the new women's jail, the California State Prison-Los Angeles County (CSP-LAC) is also in Lancaster. To challenge the blatant disregard and denial of how damaging valley fever is in that area, Kenneth E. Hartman, a prisoner currently held at CSP-LAC, provided the written account below of how he and others were infected with valley fever, and why this new women's jail must be stopped.

How I Contracted Valley Fever in Lancaster: Kenneth E. Hartman

When I first got sick with valley fever here at the state prison in Lancaster, California, medical staff had no idea what was wrong with me. In the space of two weeks of waking every night soaked with sweat, I lost 25 pounds and became increasingly mentally confused. I developed vertigo so severe, turning over in my sleep woke me into a spinning fit so powerful I vomited onto my mattress. This lifelong and sometimes fatal disease is completely avoidable -- but if Los Angeles County moves forward with its plan to build a new women's jail in Lancaster, it will be imposing the same suffering, or worse, on countless more.

Last month, the Los Angeles County Board of Supervisors voted to approve the final environmental impact report (EIR) for the proposed women's jail at Mira Loma, in Lancaster. The EIR fails to address many serious environmental hazards with the facility, particularly the real threat of valley fever to prisoners and residents alike. The Board should have rejected this inadequate EIR and should stop moving forward with this dangerous plan.

I survived the acute phase of the disease, despite the negligence of the prison doctors. The doctors told me it was just a bad case of the flu or maybe AIDS. Thanks to the help of a family member and the advice of a doctor friend, I asked to be tested for valley fever.

Several formal complaints and months later, after the receipt of the first test, I was in a specialist's office near the Lancaster Community Hospital. He was surprised I had survived -- the disease had spread outside my lungs. Thus began years of painful treatments, hospital stays chained to a bed and the permanent damage to my physical health.

The provision of medical care in jails and prisons is tough in the best of circumstances. Prisoners come from the socioeconomic classes least likely to have had medical access prior to their incarceration. Chronic illnesses like hepatitis, diabetes and other ailments of poverty are rampant in these places. The diet is deficient in fruits and vegetables, and stress-related conditions are exacerbated by constant violence, abuse and isolation. There is a reason California's suicide rate continues to be far above the national average -- our prisons and jails do not operate in the best of circumstances.

Valley fever poses unique challenges the prisons and jails have yet to seriously confront. Because the disease is contracted by breathing in spores released by a fungus when the ground is disturbed, it's impossible to avoid in those areas where it's endemic. The air coming into the cells is not filtered. Accessing any services requires going outside; eating requires going outside.

In the 20 years I've been held at this prison, I've witnessed many men contract valley fever. To this day, it befuddles the medical staff. One time, the building I'm in was placed on medical quarantine status based on the assumption that a man had active tuberculosis. He had valley fever. Another man, even after all of the cases contracted here, was told he couldn't catch valley fever in Lancaster. He had valley fever.

The criminal legal system's reliance on mass incarceration puts the needs of institutions, prisons and jails ahead of the needs of prisoners, their families and their communities. Maybe the debacle of valley fever is the best/worst example of this in recent memory. After the deaths of numerous prisoners at Pleasant Valley and Avenal state prisons, consequent to endemic valley fever in the area, outside medical authorities called for the closing of both institutions.

That Los Angeles County is considering building a new jail to deliberately and forcefully expose even more people to this incurable, destructive disease, is horrifying. Human beings will die as a result.

Kenneth E. Hartman is a member of the National Advisory Board of Californians United for a Responsible Budget, a nonprofit organization dedicated to reforming the criminal legal system. Ken has served 37 years of his life sentence without the possibility of parole. Email him (indirectly): kennethehartman@hotmail.com.

Christina Tsao is an organizer with the Los Angeles chapter of Critical Resistance (CR), an organization dedicated to building a movement to abolish the prison industrial complex. Through CR-Los Angeles, Christina has worked with LA No More Jails, a coalition of community-based organizations working to stop jail construction in LA County and redirect funding to alternatives to imprisonment and community resources.

Diana Zuniga is based in Los Angeles and is the statewide coordinator for Californians United for a Responsible Budget (CURB), a coalition of 70 grassroots organizations that is reducing the number of people in prisons and jails, shrinking the imprisonment system and shifting public spending from corrections and policing to human services. She provides support to county and state struggles on criminal legal issues, and works to develop a deeper and broader base for CURB in Southern California.