In an email sent Monday and obtained by the news outlet, Sharon Drumm, chief of staff for the USDA's primary in-house research arm, the Agricultural Research Service (ARS), told the department: "Starting immediately and until further notice, ARS will not release any public-facing documents... Is this the 'war on Science' or is it the start of the war on the people's access to science, or both? 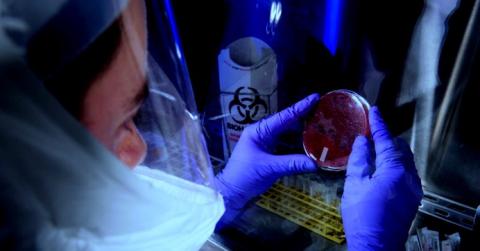 Though the majority of President Donald Trump's controversial cabinet nominations have not yet been confirmed, his so-called "beachhead" teams have arrived at their respective agencies, carrying out orders that make clear that the "War on Science" has begun.

On Tuesday, BuzzFeed broke the news that scientists at the U.S. Department of Agriculture (USDA) are no longer allowed to share information about taxpayer-funded research with the public.

In an email sent Monday and obtained by the news outlet, Sharon Drumm, chief of staff for the USDA's primary in-house research arm, the Agricultural Research Service (ARS), told the department: "Starting immediately and until further notice, ARS will not release any public-facing documents...This includes, but is not limited to, news releases, photos, fact sheets, news feeds, and social media content."

Though some Agricultural Research Service work touches on sensitive subjects like pesticides and genetically modified food, its research is generally less politically charged than that conducted by other agencies, especially those focused on understanding climate change, such as the Environmental Protection Agency.  But under the Obama administration, the Agriculture Department funneled research money into finding ways of cutting down the release of methane, a potent greenhouse gas, from cows.

At the same time, Trump surrogate Myron Ebell, a climate change denier who has led the transition for the Environmental Protection Agency (EPA), has confirmed reports that the new administration has ordered a "freeze" on grants and contracts at the agency—a move that the Union of Concerned Scientists (UCS) warns "could seriously impede the agency's work...protect[ing] our health and the environment from pollution."

In a press statement, Andrew Rosenberg, director of the Center for Science and Democracy at UCS, condemned the moves, describing the as "equally short-sighted and destructive."

"These actions don't just threaten scientists—they threaten everyone in the country who breathes air, drinks water, and eats food," said Rosenberg. "These agency scientists carry out research in support of policies that protect our health and safety and help farmers, and it makes no sense to put up walls between them and the public, or unilaterally halt the work they do."

"That the administration has moved so quickly to clamp down on scientists shows that the Trump administration is more focused on lifting rules on polluters than keeping our air and water clean," he added.

But that's not all. It has become apparent that the Trump administration has also ordered a media blackout at the EPA, as well as at the Department of Health and Human Services (HHS) and the National Institutes of Health (NIH).

According to an internal EPA memo obtained by the Huffington Post, specific prohibitions include banning press releases, blog updates, new website content, or posts to the agency's social media accounts, while all external communications and speaking engagements must be approved by the president's "Beach Team."

On Tuesday, the Huffington Post reported speaking to officials from several other agencies who confirmed that a similar communication lockdown had been instituted.

Officials at sub-agencies of the Department of Health and Human Services, for example, have been told not to send "any correspondence to public officials" according to a memo shared with HuffPost. Instead, they have been asked to refer questions to agency leadership until the leadership has had time to meet with incoming White House staff about the new administration's policies and objectives, according to a congressional official who was also informed of the communications freeze.

An official with the National Institutes of Health told HuffPost after the initial publication of this piece that an email had been sent to the directors of NIH institutes and centers providing guidance from HHS on how to handle new or pending regulation, policy or guidance.

"The HHS guidance instructs HHS Operating Divisions to hold on publishing new rules or guidance in the Federal Register or other public forums and discussing them with public officials until the Administration has had an opportunity to review them," the official said.

During his press briefing Tuesday, White House press secretary Sean Spicer said he needed to look further into the matter to offer a comment.

The clampdown comes amid growing concern that Trump and his appointees will suppress scientific innovation and research to advance their own ideological agenda.

More than 5,500 scientists have signed on to an open letter, sent to Trump in the days following his election, warning against the dangers of allowing "political or corporate influence" to override scientific fact.

"Americans recognize that science is critical to improving our quality of life, and when science is ignored or politically corrupted, it's the American people who suffer," said physicist Lewis Branscomb, professor at the University of California, San Diego School of Global Policy and Strategy, who served as vice president and chief scientist at IBM and as director of the National Bureau of Standards under President Richard Nixon.