Here’s an accounting of his public statements in the first seven days as president, not counting his error-plagued inauguration speech (which had eight problematic claims). 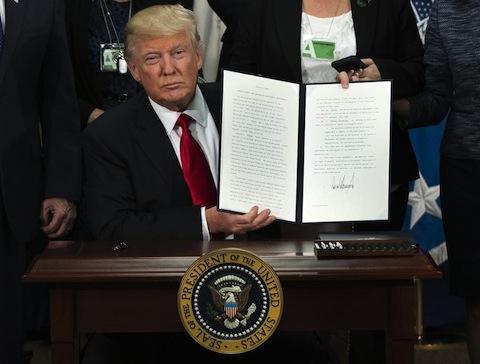 Regular readers know that candidate Donald Trump had difficulty with facts. Now that Trump is president, he continues to make misleading statements, based on incomplete information, inaccurate statistics or flights of fancy. Here’s an accounting of his public statements in the first seven days as president, not counting his error-plagued inauguration speech (which had eight problematic claims).

- ‘‘I remember hearing [when I was young] from one of my instructors, ‘The United States has never lost a war.’ And then, after that, it’s like we haven’t won anything. We don’t win anymore.’’ - Jan. 21, remarks at the CIA.

This is debatable. At the very least, one might count the 1991 Persian Gulf War and the end of the Cold War as victories for the United States.

- ‘‘I have a running war with the media. They are among the most dishonest human beings on Earth. And they sort of made it sound like I had a feud with the intelligence community.’’ - Jan. 21, remarks at the CIA.

On Dec. 9, when The Washington Post reported that intelligence officials had concluded that Russia had sought to undermine Hillary Clinton in the election, the Trump team issued a statement: ‘‘These are the same people that said Saddam Hussein had weapons of mass destruction.’’ After information leaked that Trump had been briefed that an unverified dossier alleged Russia had embarrassing information about him, Trump lashed out at the intelligence agencies and asked: ‘‘Are we living in Nazi Germany?’’ The media simply reported what Trump said about the intelligence community.

- ‘‘I looked out, the field was - it looked like a million, million and a half people. … The rest of the 20-block area, all the way back to the Washington Monument, was packed.’’ - Jan. 21, remarks at the CIA

Trump appeared to be responding to criticism of his heavily political speech in front of the CIA’s fabled memorial wall. He claimed to have received standing ovations, but he never invited the employees to take a seat. So they remained standing the whole time. (Trump later in the week repeated that he got ‘‘a standing ovation.”)

Actually, Obama’s ratings in 2009 were 7 million people higher than Trump’s numbers. Second-term inaugurals tend to get lower ratings, so Trump is cherry-picking the comparison.

There is little evidence that Trump received awards for the environment. The White House pointed us to a self-published book by Trump’s former environmental consultant. The only award mentioned in that book was from New Jersey Audubon - but the group denied it ever gave an award to Trump, the Trump National club in Bedminster or any of its employees.

- ‘‘Between 3 million and 5 million illegal votes caused me to lose the popular vote.’’ - Jan. 23, remarks to congressional leaders.

This is a fantasy. Trump is obsessed with how he lost the popular vote by nearly 3 million votes, and so he keeps making this claim even though there is no evidence to support it.

In contrast to Obama, who always played down the number of jobs that would be created by the Keystone XL pipeline, Trump inflated the numbers. The project would create part-year work in four states for 10,400 workers, the State Department determined. That added up to a total of 3,900 annual construction jobs. About 12,000 other annual jobs would stem from direct spending on the project. So that adds up to 16,000, most of which are not construction jobs.

- ‘‘I just signed two executive orders that will save thousands of lives, millions of jobs, and billions and billions of dollars.’’ - Jan. 25, remarks at the Department of Homeland Security.

Trump lauded two executive actions regarding immigration and border security, including building a wall along the border of Mexico. Again, the numbers appear to have little basis in reality. Just building the wall is estimated to cost as much as $25 billion - before annual maintenance costs.

- ‘‘Before we go any further, I want to recognize the ICE [Immigration and Customs Enforcement] and border patrol officers in this room today and to honor their service and not just because they unanimously endorsed me for president.’’ - Jan. 25, remarks at the Department of Homeland Security.

The unions for ICE agents and border patrol officers did endorse Trump in 2016 campaign. But they did not do so unanimously. Hillary Clinton received 5 percent of the vote of the ICE membership, according to a statement by the National Immigration and Customs Enforcement Council. The National Border Patrol Council endorsement, meanwhile, was based just on the vote of 11 union leaders, which sparked controversy among union members. Agents in El Paso, in a 14-13 vote, narrowly failed to have the local union disavow the endorsement.

Trump’s electoral college margin was relatively narrow by historical standards. He ranks 46th out 58 elections. A switch of about 40,000 votes in three states would have swung the election to Clinton.

- ‘‘Then he’s groveling again. You know I always talk about the reporters that grovel when they want to write something that you want to hear but not necessarily millions of people want to hear or have to hear.’’ - Jan. 25, interview with ABC News.

Trump attacked the author of a 2012 Pew Center on the States report for saying his report did not back up Trump’s claims of voter fraud. Trump suggested the researcher had changed his tune, but when the report was issued the author repeatedly explained it did not reflect voter fraud.

Not only is there no evidence of massive voter fraud, but there is no way Trump could possibly know this.

- ‘‘When President Obama was there two weeks ago making a speech, very nice speech. Two people were shot and killed during his speech.’’ - Jan. 25, interview with ABC News.

No one was shot and killed in Chicago on Jan. 10, 2017, the day Obama gave his farewell speech, according to the Chicago Police Department.

Trump, in the interview, said experts who said this would violate international law were ‘‘fools.’’ But there are practical problems, too. In 2015, Iraq produced about 4 million barrels a day, enough crude oil to fill more than 700 Trump Towers. Securing all of the oil, including in the northern Iraq where the Islamic State exists, would require a military force larger than the one that invaded Iraq in 2003.

Trump is lumping together the wars in Iraq (in the Middle East) and Afghanistan (in South Asia), which together cost about $1.6 trillion from 2001 to 2014. He is also adding in estimates of future spending, such as interest on the debt and veterans care for the next three decades.

- ‘‘You had millions of people that now aren’t insured anymore.’’ - Jan. 25, interview with ABC News.

In attacking the Affordable Care Act, Trump repeats a whopper. Some 20 million people have gained health coverage because of the law. About 2 million people were told their old plans no longer qualified under the law, but after an uproar, most received waivers that kept the plans going until the end of 2017. In any case, anyone whose plan was terminated could buy new insurance.

Trump takes both comments out of context and twists their meaning. Dayton faulted Republicans for refusing to adjust the law, which he said made insurance ‘‘no longer affordable to increasing numbers of people.’’ Bill Clinton’s remark about a ‘‘crazy system’’ referred to the fact that people who did not qualify for insurance subsidies did not have a way to buy into Medicare or Medicaid.

- ‘‘NAFTA has been a terrible deal, a total disaster for the United States from its inception, costing us as much as $60 billion a year with Mexico alone in trade deficits.’’ - Jan. 26, remarks to congressional Republicans.

The trade-deficit number is close to correct, but Trump apparently does not understand the meaning of ‘‘trade deficit.’’ He often suggests this money could be used to pay for his planned wall along the southern border. But that’s nonsensical. A trade deficit only means that people in one country are buying more goods from another country than people in the second country are buying from the first country. No money passes from government to government.

‘‘Welfare’’ is a broad term and can apply to people who are working but receiving some government assistance. If someone is receiving means-tested assistance, it doesn’t necessarily mean they are not working.

Not all people eligible for welfare collect benefits. When they do, many of the benefits are contingent on the recipients working or actively searching for jobs, as a result of an overhaul of welfare signed into law by Clinton in 1996. And even low-income families receive some level of public assistance.

Trump is apparently unaware that participation has declined in means-tested programs such as Temporary Assistance for Needy Families (TANF) and the Supplemental Nutrition Assistance Program (SNAP, formerly known as food stamps).

Caseloads in the TANF program have declined over the past 15 years, from about 2.4 million families to 1.6 million families. After its post-Great Recession peak in 2013, the number of people receiving food stamps has declined. In October 2016, there were 43.2 million people participating in the program, compared with 47.4 million in October 2013.

- ‘‘Here in Philadelphia, the murder rate has been steady - I mean just terribly increasing.’’ - Jan. 26, remarks to congressional Republicans.

This is wrong. Murders have declined significantly in Philadelphia over the past decade, from 397 in 2007 to 277 in 2016; the number has been below 300 for four straight years in a city that neared 500 in 1990. Not only that, but police records reviewed by the Philadelphia Inquirer showed that in 2016, ‘‘there were fewer violent crimes than in any other year since 1979, the fewest number of property crimes since 1971, and the fewest number of robberies since 1969.’’