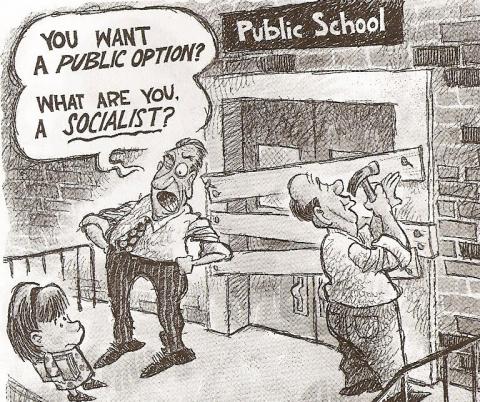 After this, we then re-create Debtors' Prisons., AlterNet
Worldwide, School Choice Hasn't Improved Performance
By Henry M. Levin;  Steve Hinnefeld
January 30, 2017
U.S. News and World Report
Worldwide, rising populism and identity politics are leading to increased demands from families seeking out specific types of schools that mirror their ideologies. In some countries, this has extended to replacing the public system of schools with government vouchers that can be used to pay for private schools - a priority of Betsy DeVos, the nominee for U.S. education secretary.
Advocates argue that school choice promotes competition that will improve performance and allow the freedom of choice that will best serve student educational needs and family preferences.
These are not new ideas. Nobel prize-winning economist Milton Friedman designed an educational voucher plan some 60 years ago that was adopted by Sweden and Chile. Under his plan, families can use vouchers at any approved private school. Several states and cities in the U.S. sponsor voucher approaches for students from low-income families that are used mainly at religiously affiliated schools.
Education in most democratic countries was established primarily to prepare students for roles in the emerging industrial democracies of the 19th century. Democratic political participation requires access to information, engagement in discourse and electoral activity to be effective. Economic participation requires understanding of markets, prices, money, government intervention, employment relationships and economic responsibilities and opportunities.
"A stable and democratic society is impossible without a minimum degree of literacy and knowledge on the part of most citizens and without widespread acceptance of some common set of values," Friedman wrote in a 1955 essay on educational vouchers. This required universal schooling at government expense.
Clearly there is a tension between unfettered school choice as a goal and a common educational experience that will ensure students are prepared for the demands of a democratic society. Families have their own private goals and their own reasons for preferring particular types of schooling experience.
Eighty percent of private school students in the U.S. are in religiously affiliated institutions that reflect their family beliefs, but not necessarily the values of a democracy. It is natural that families would like their schools to reinforce their religious, philosophical and political beliefs, but these must be weighed against a common experience that justifies government funding.
Some have argued that competitive incentives induced by school choice will lead to better educational outcomes. However, there is little evidence to support this claim.
Sweden has had an educational voucher system since 1992, but its achievement levels on international tests have been falling for two decades. Chile has had such a system since 1980, and there is little evidence of improvement in achievement relative to countries at similar levels of income. Cleveland, Milwaukee, and the District of Columbia have issued vouchers to low-income families, but sophisticated evaluations find no difference between achievement in private voucher schools and public schools with similar student populations. Students from low-income families in Louisiana who have used vouchers to shift from public to private schools have experienced striking reductions in achievement gains relative to similar students in public schools.
In England there has been a dramatic shift from schools governed by public councils to academies run by private groups with great autonomy and the ability to select their own students. The results on student achievement show no distinct advantage, and there are similar results for U.S. charter schools based upon careful statistical comparisons.
Where school choice has shown powerful effects around the world is the systematic separation of students by ethnicity, social class and religion.
Sweden's vouchers have increased segregation by social class and immigrant status. Chile's voucher system has produced one of the most segregated system of schools in the world by family income. In the Netherlands, studies of the school choice system have pointed to school separation of students by ethnicity, immigrant status and family income. A Brookings Institution study found that U.S. charter schools are more segregated racially and socio-economically than public schools in surrounding areas. The Program for International Student Assessment, an important triennial study of international student performance, finds school segregation by social class is associated with school choice.
Although even public schools have segregation challenges typically caused by residential location, school choice tends to streamline the racial, social class and ethnic isolation of students, as well as separate them by political ideology and religion.
Parents have their own private goals for their children and ample opportunities to pursue them. Schools account for only about 10 percent of the waking hours of the young between birth and age 18, freeing most of the time for family experience. They also have a constitutional right to send their children to religious schools.
The question is how to balance the quest for school choice with preparation of the young for the shared values and knowledge necessary for an effective democracy. Universal school choice will undermine a shared experience and further exacerbate conflict and social division. The challenge for education is to find forms of choice that insure exposure of all students to the experiences they need for democratic participation.
[Henry M. Levin is the William Heard Kilpatrick Professor of Economics and Education at Columbia University's Teachers College.]

Study Confirms Voucher Programs Discriminate
By Steve Hinnefeld
January 30, 2017
School Matters
Research led by an Indiana University professor confirms what school voucher critics have long argued: Voucher programs receive public funding yet discriminate on the basis of religion, disability status, sexual orientation and possibly other factors.
The finding is especially timely as President Donald Trump and his designee to serve as secretary of education, Michigan school-choice activist Betsy DeVos, have indicated they will use federal clout and money to push states to expand voucher programs.
"At the time we did the study, we had no idea it would be so relevant," said Suzanne Eckes, professor in the IU School of Education and the lead author of the research paper. "People are starting to think about these questions, and the topic has not been widely addressed in research."
The study, "Dollars to Discriminate: The (Un)intended Consequences of School Vouchers," was published last summer in the Peabody Journal of Education. Co-authors are Julie Mead, a professor at the University of Wisconsin-Madison, and Jessica Ulm, a doctoral student at IU.
The researchers examined 25 programs in 15 states and Washington, D.C., that provide public funding for private K-12 schools, including traditional tuition voucher programs and voucher-like programs called education savings accounts. Indiana is one of seven states with a statewide voucher program. Other programs are limited to cities (Milwaukee, Cleveland) or special-needs students.
The authors say legislators who authorized the programs neglected to write policies that provide equal access for students and avoid discriminating against marginalized groups.
"We argue that each state has an obligation to ensure that any benefit it creates must be available to all students on a non-discriminatory basic - including the benefit of a publicly funded voucher for attendance at a private school," they write.
Indiana's school voucher program, established in 2011, served 32,686 students who attended 316 private schools last year. Nearly all voucher schools are Christian schools, including Catholic, Lutheran and Evangelical or non-denominational schools. The state spent $131 million on vouchers but provided almost no fiscal oversight, according to a report by the IU Center for Evaluation and Education Policy.
Indiana law bars voucher schools from discriminating on the basis of race, color or national origin. But state law doesn't mention discrimination by religion, disability or sexual orientation.
Voucher schools in Indiana can receive extra state money for enrolling special-needs students. But some of the schools have language on their websites that suggests they may not admit students with disabilities - or that they will provide only limited accommodations for students.
As the study notes, citing a 2014 Bloomington Herald-Times article, some Indiana Christian schools that receive vouchers welcome only families that embrace their religious beliefs, including a rejection of a "gay/lesbian lifestyle" that is "contrary to God's commands."
The Indiana program does not let students opt out of religious instruction and activities. Of the programs the researchers examined, only Milwaukee's has an opt-out provision.
Eckes developed an interest in the research topic after reading a 2013 New York Times article that reported Georgia schools receiving publicly funded vouchers could bar or expel LGBT students.
"I just found that astonishing," she said.
Voucher supporters argue that religious schools need to be able to set their own admissions criteria and that rejecting LGBT students comes from a deeply held religious belief. But Eckes points out that the same argument was once made to keep African-American students out of white schools in the South. The first voucher schools, the researchers say, were publicly funded "choice academies" established to get around the Supreme Court's Brown v. Board of Education desegregation decision.
"Discrimination is discrimination," Eckes said. "If you're going to take public money, you simply shouldn't be able to discriminate."
[Steve Hinnefeld is a former education reporter for the Bloomington (Ind.) Herald-Times.]