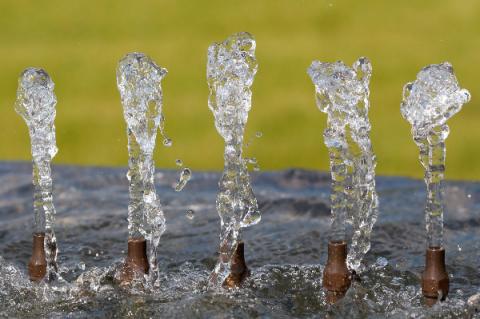 Water fountain in the Cudahy Gardens, near the art museum in Milwaukee, Wisconsin. , Dori, CC BY-SA 3.0 US

On January 16, 2016, President Obama declared a federal emergency for the city of Flint, Michigan, over the contamination of the city’s drinking water.

One year later, not only is the city still struggling to provide clean sources of water to the Michigan city’s population, but the plight of residents in Flint has opened up the conversation about a water crisis in the United States that very few people even knew existed.

The sad story of Flint, Michigan, gained national attention because it was a crisis that was entirely avoidable, at least for the time being. Republican Michigan Governor Rick Snyder was looking for ways to cut costs, so he hired an outside manager to come up with ideas on how to do that. Unfortunately, one of the ideas that was put into action was to change the source of Flint’s drinking water from the Detroit water system to the Flint River, which was known to be heavily polluted. When that contaminated water hit the city’s aging water delivery infrastructure, the chemicals interacted with the lead pipes, causing dangerous levels of lead contamination for residents who did not have water filters.

Like most metals, lead will break down over time, especially when it is exposed to corrosive water throughout its existence. When you have close to 1.2 million miles of lead pipes for water delivery in America — pipes that only have a lifespan of about 75 years and many are reaching that age — you have a recipe for disaster that experts warn will cost close to $1 trillion to fix.

The only reason that the crisis in Flint, Michigan, was brought to the public’s attention was because of one woman, a pediatrician named Mona Hanna-Attisha, who began noticing the symptoms of lead poisoning in an extremely large number of children from Flint. Dr. Hanna-Attisha went public with this information, which prompted investigations from civil engineers, leading to the unveiling of the problem. At the time of Dr. Hanna-Attisha’s discovery, the contaminated water had been flowing through taps in Flint for two years.

Sadly, Flint is just a tiny piece in a much larger story. Likely the reason the crisis in Flint made national headlines is because of the level of political incompetence that went along with it. But the story did wake people up to the idea that dangerous water could be anywhere, and that led to investigations by reporters who uncovered one of the potentially most overlooked stories of 2016.

From the Reuters report:

The poisoned places on this map stretch from Warren, Pennsylvania, a town on the Allegheny River where 36 percent of children tested had high lead levels, to a zip code on Goat Island, Texas, where a quarter of tests showed poisoning. In some pockets of Baltimore, Cleveland and Philadelphia, where lead poisoning has spanned generations, the rate of elevated tests over the last decade was 40 to 50 percent.

Like Flint, many of these localities are plagued by legacy lead: crumbling paint, plumbing, or industrial waste left behind. Unlike Flint, many have received little attention or funding to combat poisoning.

To identify these locations, Reuters examined neighborhood-level blood testing results, most of which have not been previously disclosed. The data, obtained from state health departments and the U.S. Centers for Disease Control and Prevention, tracks poisoning rates among children tested in each location.

According to the Centers for Disease Control, at least 2.5 percent of children in the United States have elevated levels of lead in their blood, a direct result of drinking contaminated water.

The World Health Organization, as reported by the Huffington Post, says that infants and small children may exhibit no signs of lead poisoning in their early years, but that the effects of lead on brain development become evident in adolescence. According to the Huffington Post:

Once kids reach school age, cognition problems, including lower IQ and ADHD-like symptoms start to show up. Lead exposure has been linked to physical problems, such as anemia, kidney dysfunction and high blood pressure, as well as behavioral problems, including aggressive behavior and problems with the criminal justice system.

We should also note that in these studies of contamination, researchers focused only on lead contamination. The levels of other toxins such as mercury, arsenic, and commercial and household chemical contamination could potentially make the water in these areas and others far more toxic than this set of data indicates.

Complicating matters further is the fact that testing children for lead contamination typically falls on states and municipalities, and that funding is drying up quickly. In short, states not only lack the funds to repair their aging water infrastructure, but they also lack the necessary funds to study the negative effects of that aging water delivery system on the public.

While the widespread contamination should raise alarm bells for every American, what might be even more terrifying is the fact that analysts are predicting that in a few decades, we’ll be lucky if we can even afford to drink contaminated water.

According to a new report from Michigan State University (MSU), a variety of compounding factors in the United States could easily push large portions of the population out of the financial range to even afford water in the future.

From the MSU report:

A variety of pressures ranging from climate change, to sanitation and water quality, to infrastructure upgrades, are placing increasing strain on water prices. Estimates of the cost to replace aging infrastructure in the United States alone project over $1 trillion dollars are needed in the next 25 years to replace systems built circa World War II, which could triple the cost of household water bills…

Over the next few decades, water prices are anticipated to increase to four times current levels. Prices could go higher if cities look to private providers for water services, who have a tendency to charge higher rates than public providers. These pressures on water systems, combined with the fact that water is a vital necessity to sustain life, place this issue at the forefront of 21st century infrastructure challenges. While studies have found that Americans are willing to pay more to maintain and ensure access to water resources, this willingness to pay may conflict with their fundamental ability to pay for water.

The report notes that water prices across the country have risen by about 41 percent since 2010, and if this particular trend continues, 35.6 percent of American households will not be able to afford water services within the next five years.

In short, the water affordability crisis is not something that is a few decades off, or even a single decade off: More than 40 million American citizens could find themselves unable to afford water in the next five years if both stagnating incomes and increasing water prices stay on their current trajectories.

These problems are very real, and they are problems that are generally not gaining very much attention. While the water contamination crisis will occasionally steal a headline or two, virtually no attention has been paid to the fact that we’re pricing a third of United States citizens out of the water market.

Resource scarcity breeds conflict. That’s been true throughout human history. And when we’re talking about something like water — the single most important thing to sustain life — the looming scarcity should be a top concern for every American citizen.

Farron Cousins is the executive editor of The Trial Lawyer magazine, and his articles have appeared on The Huffington Post, Alternet, and The Progressive Magazine. He has worked for the Ring of Fire radio program with hosts Robert F. Kennedy, Jr., Mike Papantonio, and Sam Seder since August 2004, and is currently the co-host and producer of the program. He also currently serves as the co-host of Ring of Fire on Free Speech TV, a daily program airing nightly at 8:30pm eastern. Farron received his bachelor's degree in Political Science from the University of West Florida in 2005 and became a member of American MENSA in 2009.  Follow him on Twitter @farronbalance