The Crisis at Oroville Dam, Explained

The crisis at Oroville Dam should be a wake-up call to take these warnings seriously, though it’s hardly the first. 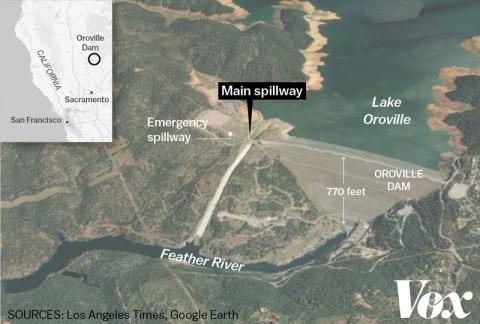 The Oroville Dam in northern California is the tallest dam in the United States, rising 770 feet high. It holds back a reservoir containing 1.1 trillion gallons of water, supplying farms and cities across the state. It’s a vital piece of infrastructure.

But over the past week, the aging dam has also became a serious threat.

On Sunday, authorities ordered some 188,000 people around Oroville to evacuate their homes over concerns that the dam’s emergency spillway could fail and an onrush of water out of the reservoir could flood nearby towns and roads. While there was no sign that the dam itself would collapse, the situation was serious enough that Gov. Jerry Brown ordered an emergency response.

By Tuesday, February 14, things had stabilized, and people are now being told they can return home — although the danger hasn’t fully subsided just yet, especially with more rain on the way this week. And whatever happens next, it’s a good reminder to pay more attention to the shoddy shape of America’s dam infrastructure.

Over the last few weeks, winter storms and atmospheric rivers have drenched northern California, filling its reservoirs to the brim. By February, Oroville Reservoir — which lies 75 miles north of Sacramento — was at 151 percent of normal capacity. While all that rain has helped ease the state’s brutal five-year drought, it’s created a new problem: too much water.

Dams are typically engineered to handle overflow via what’s called a “spillway.” When the water reaches a certain level at the Oroville Reservoir, managers can release the excess in a controlled fashion through a giant concrete chute next to the dam, sending the water into the Feather River below. Here’s a diagram:

The problem is that Oroville Dam’s main spillway has become severely damaged. On February 7, a giant hole suddenly opened up in the chute, with concrete crumbling and water flying everywhere. In the aftermath, managers were reluctant to send water racing down this main spillway, lest the damage get worse.

But the water levels in the Oroville Reservoir kept rising and rising, and it had to go somewhere. So, for the first time in the dam’s 50-year history, water began pouring over the top of the auxiliary or “emergency” spillway to the left of the main concrete chute — a feature that serves as a last resort.

That was terrifying: If the 30-foot-high concrete barrier at the top of the auxiliary spillway collapsed, billions of gallons of water would start bursting from the reservoir all at once, swamping the Feather River below. Joe Countryman, a member of the Central Valley Flood Protection Board, explained the potentially dire consequences to the Sacramento Bee: The river would crest far higher than the levees downstream are equipped to handle. Dozens of towns between Oroville and Sacramento would flood. Highway 70 would be inundated. It’d be one of the worst environmental disasters northern California had ever seen.

So officials warned the 188,000 people in the floodplains to get out — and fast.

If the spillway did collapse, catastrophic flooding along the Feather River would only be the start of California’s worries, as UC Berkeley’s Ethan Elkind explains: “the dam is the prime source of water (61%) for the state’s Central Valley Water project, which supplies water to Southern California and the Bay Area, as well as Central Valley farmers. Losing that reservoir would likely put those parts of the state in an extreme water shortage situation for the long term.”

The situation has stabilized — but the danger hasn’t passed yet

Fortunately, by February 14, the situation had stabilized somewhat — and evacuees were being told they could return home. Still, the danger hasn’t entirely disappeared.

Over the weekend, managers had been inspecting the damaged main spillway and concluded it could withstand larger water flows, even with the giant hole. By Sunday night, they were sending a tremendous 100,000 cubic feet of water per second down the concrete chute to drain the reservoir:

Levels in the Oroville reservoir eventually fell far enough that water was no longer rushing over the auxiliary spillway. “Current releases remain within the capacity of downstream channels,” the Department of Water Resources said on Monday.

The real question is what happens next. The region is expecting more storms by Thursday, so workers have been rushing to fortify the emergency spillway before water reservoir levels begin rising again and more water starts pouring over the eroded hillside. Crews have been using helicopters to drop rocks into holes carved out by water, hoping to shore up the structure. It’s basically been a race against time.

The big question is whether the auxiliary spillway will hold if and when the rain returns. At this point, the Department of Water Resources expects to get water levels in the Oroville River low enough that the emergency spillway won’t need to be used. But they’re going to be watching this very, very carefully — in case the unexpected happens.

The Oroville Dam was built in the 1960s, so it shouldn’t be a huge surprise that it’s experiencing wear and tear. Indeed, back in 2005, a handful of environmental groups warned that the dam failed to meet modern safety standards for severe flooding. They urged federal officials to mandate concrete fortifications along the auxiliary spillway as part of the relicensing process for the dam’s hydroelectric plant.

But as the Sacramento Bee reports, federal and state officials rejected this request, arguing that a disaster like we’re seeing now was unlikely, and the dam could handle worst-case scenarios. (Some reports suggested that state and local agencies didn’t want to incur the extra costs for upgrades, though they’ve pushed back against this.)

Expect this to become an increasingly common dilemma around the country. As Jenny Rowland explains in this issue brief for the Center for American Progress, many of America’s dams are aging past their designated lifespan and will require costly upgrades in the years to come.

“With their increasing age and cost, the current state of dam infrastructure is poor,” Rowland writes. “Crumbling dams not only pose a safety risk to the communities that surround them—they also pose significant risks to U.S. rivers and wildlife.”

And while the federal government tends to be relatively diligent about maintaining the dams it owns, the vast majority of dams around the country are either operated by states or private interests, where upkeep tends to be patchier. (California, which owns the Oroville Dam, is much better about dam inspections than most states.)

Rowland’s report recommends a series of steps for upgrading this infrastructure, from removing obsolete and unnecessary dams to creating a federal Safe Dams Fund for needed repairs. Congress took an early step last year by passing a water-infrastructure bill authorizing FEMA to establish a grant program to identify and rehabilitate “high hazard” dams that would be especially dangerous if they failed (about 17 percent of the nation’s 87,000 dams fall in this category). But there’s more to be done.

The crisis at Oroville Dam should be a wake-up call to take these warnings seriously, though it’s hardly the first. Rowland has another eye-catching example from Texas: “In 2015, for example, government officials in Texas were forced to confront the dangers associated with failing dams in the state when a heavy rain exposed critical safety problems at Lewisville Lake Dam in Dallas. The 60-year-old dam is one of the riskiest in the nation. If it were to fail, it would cover the city of Dallas in 50 feet of water, resulting in significant loss of life. A former U.S. Army Corps of Engineers dam safety coordinator described the potential failure of this dam as ‘a much bigger magnitude to the Dallas area than Hurricane Katrina was to New Orleans.’”

— The Sacramento Bee has been doing some of the best reporting on the dam and the evacuations; you should check out their coverage here. The Los Angeles Times is also posting live updates.

— Two years ago, after at least 20 (smaller) dams in South Carolina collapsed during flooding, NPR did a nice overview of America’s aging and underfunded dam infrastructure.