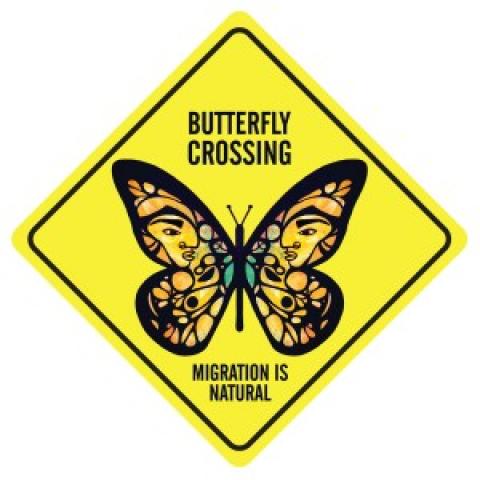 The chaos created by Donald Trump’s ban on refugees is only the beginning of a crisis that Trump and his allies are creating.  Less noticed was Trump’s rollout of executive actions on immigration and the border wall on Jan. 25. These executive orders were the opening act of what is certain to be an aggressive crackdown on unauthorized immigration.  The left responded quickly to the Jan. 27 ban on refugees with important protests and significant legal challenges.  However, Trump has created so many crises in his first weeks that it would be easy to miss the long-term train wreck being created by Trump’s earlier executive actions on the border wall and the expansion of arrests and deportations.

On Jan. 25 Trump signed an executive order on immigration that directs ICE (Immigration and Customs Enforcement) agents to use a  broadened definition of  “criminal” and focus deportation efforts not only on those who have been convicted of crimes, but also those who have been charged, or “have committed acts that constitute a chargeable criminal offense.”  This order will increase the number of persons subject to deportation by at least 2 million and the order will triple the number of agents in the ICE Enforcement and Removal Operations office and give them broad power to ultimately decide who should be deported. Increased deportations have already begun under this new executive order.

Past use of aggressive interior enforcement, then called “Secure Communities,” was an abject failure. ICE agents conducted raids and arrested people at work sites, schools, and on the streets.  Often they jailed complete families.  In most cases, these arrests and deportations depended upon the cooperation of local police and social service agencies (see sanctuary cities, below). The campaigns deported parents of U.S. citizens, disrupting families, schools, and workplaces. The raids were too often done without proper warrants and other procedural safeguards.

The Wall (or Fence)

We should not assume that each of the Trump executive orders will be accepted and implemented.  On the contrary.  The orders produce contradictions and will produce resistance.

Yes, the U.S. can build a wall or fencing on the U.S. side of the border, except for that portion of the border that is on the Tohono O’odhom reservation in Arizona.   But the wall will be an expensive failure.

Trump’s demand to build the wall and to impose tariffs is producing a reaction in Mexico.   The U.S. not only imports from Mexico, U.S. corporations also exported to Mexico $267 billion dollars worth of goods in 2015. Mexico is the U.S.’s second largest export market.  A tariff on the U.S. side will likely produce a tariff on the Mexican side that could cost some 1 million jobs in the U.S.

Arturo Rodriguez, President of the United Farmworkers union (UFW) asks, “Since some 50 % of agricultural labor in California, Florida and Texas is undocumented, when they arrest all of these workers, who is going to feed the nation?”  The answer to his question is, if the border is closed and mass arrests make workers not available, most vegetable production will move to Mexico and to other countries.  Is that progress?

The Trump administration is being reckless and poorly informed in matters of foreign policy as well as domestic issues.  Building Trump’s wall and threatening to make Mexico pay for the wall built on U.S. land was a belligerent act championed in the Trump campaign.   This poorly informed effort ignores many of the realities of the U.S.-Mexico relationship.  Mexico provides the primary security against migration to the U.S. on our southern border.  Mexican police and military restrict migration and turn thousands of would-be migrants back each year.

The Mexican army and police also provide the primary obstacle to migrants from Honduras, El Salvador and Guatemala from reaching the U.S. border.  The U.S. pays the Mexican forces to do this enforcement.  Given Trump’s provocative statements and acts, they could simply stop serving as a border security force for the U.S. The end of bi-national police cooperation would massively increase immigration and severely reduce efforts to restrict drug cartels from moving drugs into the U.S.

The Mexican political system and the police are corrupt, but the situation could get much worse.  The Mexican legislature is already considering several bills to prevent Mexico from cooperating with the Trump surge in deportations.  Readers should know that the Mexican presidency is up for election in 2018, and the current dominant party (PRI) is in disgrace, in part because it is seen as subservient to the Trump administration.  Nationalism and resisting Yankee interference is a potent political force in Mexico and a left populist – Manuel Lopez Obrador – is currently far ahead in the polls.

Yet another structural weakness of the Trump plan for expanding deportations further makes it almost impossible for the plan to work.

Deportations currently depend upon the persons arrested agreeing to be quickly deported.  Unless they have convicted of a prior felony, persons arrested are immediately offered a “voluntary” departure.  If they sign it, most of those arrested will be deported within 2-3 days. (In California it is usually the same day.)

Immigrant rights activists have developed a strategy to defeat these deportations.  Those arrested are encouraged to refuse to sign the “voluntary departure.”  Instead, they would insist upon having legal counsel. All persons inside the U.S. have a right to counsel (not only citizens).

If some 20%- 30% of those arrested begin to refuse to sign, the jails will fill within days – even the private prisons.  If those arrested insist on legal counsel, the courts will be overloaded.

When those arrested have an attorney, some 40% win the right to stay.  And, another 40% may not win, but they will delay deportation for 2-5 years while their cases are heard in the back logged courts (long enough for the children to grow up).

Even with the growth of private prisons, the detention centers will fail. Immigration hearing officers in the U.S. had a backlog of 453,948 cases in 2015.  It takes some 635 days to process the average case.  While Trump will expand the number of case officers, the hearings will create a backlog of years.

Trump’s threatening of sanctuary cities and communities that offer protection to immigrants because they recognize the injustice in current immigration laws and practices will undermine public safety.

Immigration officers (ICE) need the cooperation of local law enforcement and social services to do their jobs successfully.  ICE has far too few agents and too few jails to effectively remove large numbers of people.  The last time such removal was practiced – in Operation Wetback in 1952– the effort was only effective because local cities and social service institutions cooperated.   The removal was popular. This time, many will not cooperate.

There are some 300 sanctuary cities and districts in the U.S.  Citizens and voters in these cities can have an important role in their defense.

Readers should check to see if your local city, county, or state has sanctuary resolutions.  Usually, these resolutions contain statements such as:

1. Public resources, including salaries and equipment funded by local and state taxes, should be limited to serving the jurisdiction supplying these resources and its residents.  City, county and school district funds should not be used to implement or enforce federal immigration laws that are the responsibility of federal law enforcement.

2. Local law enforcement resources should be solely devoted to enforcement of local and state laws, protecting all residents and serving the community.  Enforcement of federal laws, including immigration laws, should be left to the federal government unless the individual involved is a convicted felon.

Based upon such sanctuary resolutions, we can insist that local resources and personnel not spend time and resources aiding this misguided federal immigration enforcement.

There are numerous groups working to protect the rights, the safety, and the families of the immigrants among us. Working with your local DSA, join with these groups to insist that local resources and personnel not spend time and resources aiding Trump’s enforcement efforts.

Working together, we are not powerless in the face of executive authority.

Duane Campbell is a professor emeritus of bilingual multicultural education at California State University Sacramento, a union activist, and past chair of Sacramento DSA. He serves on the Immigrant Rights Committee of DSA’s Anti Racism Working Group.