About 39,000 Minnesota workers suffer from wage theft each year, resulting in $11.9 million in wages owed, and that's only what goes reported. The union-backed Wage Theft Initiative proposes policy changes to give the state Department of Labor and Industry more enforcement tools and an increased budget. 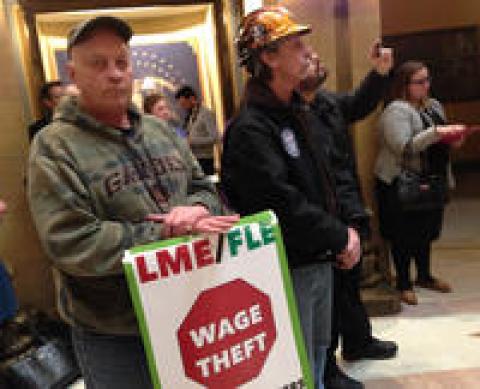 Workers and communities suffer – and businesses face unfair competition – when companies cheat their employees through wage theft, advocates said Wednesday at the state Capitol. They called on the Legislature to pass measures that would strengthen enforcement against this widespread problem.

“If you work for a living, you should get paid!” said Rep. Tim Mahoney, DFL-St. Paul, one of the authors of the anti-wage theft legislation. Several legislators, Lieutenant Governor Tina Smith and state Department of Labor and Industry(link is external) Commissioner Ken Peterson listened as workers described how their paychecks have been stolen by unscrupulous employers.

One of the most egregious current examples is Lakeville Motor Express, a trucking company that allegedly changed its name and location to avoid paying thousands of dollars to its employees. The workers’ union, Teamsters Local 120(link is external), is leading an effort to recoup what was lost.

"We are union strong and we are here to fight for our rights!" said Samuel Nunn, one of the 95 affected workers.

The Department of Labor and Industry has filed suit against Lakeville Motor Express for more than a half million dollars in unpaid wages. But the department lacks the resources to investigate half of the complaints it receives, Commissioner Peterson said.

An investigation by Workday Minnesota has found wage theft in Minnesota is larger and more widespread than most people realize – and the problem is growing. The department estimates that 39,000 Minnesota workers suffer from wage theft each year, resulting in $11.9 million in wages owed, and that's only what goes reported. Wage theft occurs when:

Businesses that follow the law face unfair competition from those that are cheating, said Shawn Larson of RTL Construction in Shakopee.

“They skirt laws in order to improve their bottom line,” Larson said. “It’s obviously bad for workers but it’s also bad for businesses and it’s bad for the state of Minnesota.”

The Wage Theft Initiative proposes policy changes to give the Department of Labor and Industry more enforcement tools and an increased budget to hire four additional wage and hour investigators to do proactive outreach across the state. It would empower workers with more information and impose stiffer penalties for violators.

“I had to live out of my car and then a friend’s house for several weeks because of the wage theft and the problems it created for me,” said Gloria Rojo, a janitor who experienced wage theft while cleaning car dealerships and other buildings for a subcontractor of ROC Commercial Cleaning. Since then, she has become a leader in CTUL(link is external), a Minneapolis-based worker center that is challenging wage theft.

“Now, I’m fighting to win improved enforcement standards around this crisis. This law would create the necessary consequences for companies like ROC and their subcontractors and allow us to get paid for our dignified work like we deserve.”

Barb Kucera has edited Workday Minnesota since its launch in 2000. She is also currently director of the University of Minnesota Labor Education Service, which publishes Workday.