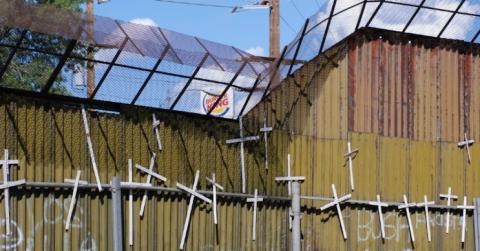 The 'Wall of Crosses' along the U.S.-Mexico border in Nogales. , Jonathan McIntosh/cc/flickr

The Trump administration on Tuesday issued new guidelines that constitute a "sweeping rewrite" of Obama-era policies on immigration, greatly expanding the number of individuals that can be forcibly deported and further emboldening the current crackdown.

The memoranda on implementation (pdf) and enforcement (pdf) of President Donald Trump's recent executive orders on immigration, which were dated Monday and published by the Department of Homeland Security (DHS), were leaked to news agencies over the holiday weekend and sparked wide concern among immigrants and civil liberties organizations.

Speaking to reporters on Tuesday press call, Marielena Hincapié, executive director of the National Immigration Law Center, said the memos are "breathtaking in scope," adding that "they basically throw the rule of law out the window."

In short, as the Guardian observed, they "represent a sweeping rewrite of the nation's immigration enforcement priorities."

In fact, the only Obama administration immigration guidelines kept in place are those relating to undocumented immigrants brought to the United States as children, also known as the Deferred Action for Childhood Arrivals (DACA) program.

"These memos confirm that the Trump administration is willing to trample on due process, human decency, the well-being of our communities, and even protections for vulnerable children, in pursuit of a hyper-aggressive mass deportation policy."
—Omar Jadwat, ACLU

Whereas President Barack Obama prioritized undocumented immigrants convicted of serious crimes for removal, the new memo states that DHS "no longer will exempt classes or categories of removable aliens from potential enforcement," thus expanding the scope to include any undocumented individual charged with—or even suspected of—a crime, including minor traffic offenses.

Further, in one of the more controversial stipulations, the memos state that parents who help children enter the U.S. illegally could be subject to deportation or criminal prosecution.

"Regardless of the desires for family reunification, or conditions in other countries, the smuggling or trafficking of alien children is intolerable," one memo reads.

Summarizing the order, the New York Times noted that the policy "also calls for an expansion of expedited removals, allowing Border Patrol and Immigration and Customs Enforcement agents to deport more people immediately. Under the Obama administration, expedited removal was used only within 100 miles of the border for people who had been in the country no more than 14 days. Now it will include those who have been in the country for up to two years, and located anywhere in the nation."

The documents also direct Immigration and Customs Enforcement (ICE) to hire up to 10,000 new agents, expand the number of detention facilities, and detain individuals at the start of removal proceedings, rather than giving a notice to appear in court.

The new regulations, The Hill pointed out, "also restore programs for local law enforcement collaboration with federal authorities that were tabled under the Obama administration because of concerns that they violated due process or were a hindrance to local authorities."

"These memos confirm that the Trump administration is willing to trample on due process, human decency, the well-being of our communities, and even protections for vulnerable children, in pursuit of a hyper-aggressive mass deportation policy," said Omar Jadwat, director of the ACLU's Immigrants' Rights Project.

"However," Jadwat added, "President Trump does not have the last word here—the courts and the public will not allow this un-American dream to become reality."

The new rules come amid a widespread immigration crackdown, with deportation raids already targeting law-abiding and long-term residents. According to reporting, DHS' Kelly and Secretary of State Rex Tillerson are expected to hold talks in Mexico beginning Wednesday with border security and trade at the top of the agenda.

This work is licensed under a Creative Commons Attribution-Share Alike 3.0 License
To Support Common Dreams  Please Support Our Winter Campaign