Fighting voter ID laws in the courts isn't enough. We need boots on the ground

Groups like the American Civil Liberties Union have focused on challenging voter ID mandates in court. That’s essential, but it’s not enough. As court battles proceed, we must acknowledge our collective obligation to voters by investing in on-the-ground, in-person support. 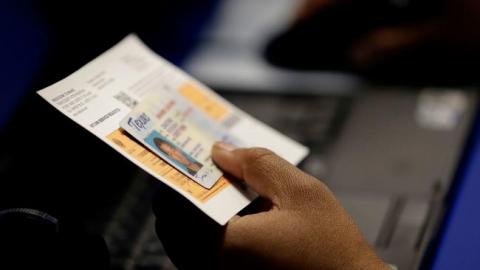 An election official checks a voter's photo identification at a polling site in Austin, Texas in Feb. of 2014, Eric Gay / Associated Press

I first met Cinderria, an 18-year-old woman of color, in a library in downtown Madison, Wis. She approached the table marked “Voter ID Assistance” and explained that with the 2016 presidential primary only a few months away, and despite several trips to the DMV, she still didn’t have a valid ID as mandated by Wisconsin’s strict new laws. It turned out she needed a Social Security card but wasn’t sure how to obtain one.

Proponents of voter ID laws don’t want to acknowledge that Cinderria’s case is far from unusual. Experts project that in Wisconsin alone, 300,000 eligible voters lack the ID necessary to cast a ballot. Across the country, 32 states have some form of voter ID law, creating a crisis of disenfranchisement not seen since the civil rights era. These ID laws don’t touch all groups equally: Voters of color, like Cinderria, are hit hardest. The elderly, students and low-income voters also are disproportionately affected. (A new study published in the Journal of Politics, for instance, found that strict ID laws lower African American, Latino, Asian American and multiracial American turnout.)

States that have implemented voter ID laws have shown little to no interest in helping their citizens comply. And the advocacy organizations that oppose these laws have few resources for direct voter assistance. Instead, groups like the American Civil Liberties Union have focused on challenging voter ID mandates in court. That’s essential, but it’s not enough. As court battles proceed, we must acknowledge our collective obligation to voters like Cinderria by investing in on-the-ground, in-person support.

Before the 2016 election, a group of us in Madison recognized the problem and got to work, partnering with local organizations like the League of Women Voters and NAACP.  As one coalition, we collaborated with social service agencies, churches, food pantries, employers, schools and election administrators. Outreach continued through the November election and is ongoing for spring elections. But there’s tons of work left to do in Madison, to say nothing of the state or nation as a whole.

The right to vote is not denied only in large volume. Our democracy deteriorates every single time an older voter can’t find transportation to a distant DMV, and every single time a working mother can’t afford the fees associated with redundant paperwork to prove her citizenship.

Having worked one-on-one with would-be voters, a nefarious truth about these laws has become clear to me. Not only do the requirements hamper individuals in the short term, they also can send a long-term signal to historically disenfranchised communities that they’re not “invited” into their country’s democratic process — a feeling all too familiar to those who were born before the abolition of Jim Crow.

We cannot return to the era of literacy tests and poll taxes. It’s crucial that all voters are offered help because they must not lose the belief that their vote is precious and their participation essential to our democracy. These voters are our neighbors, our co-workers and, at the most basic level, our fellow citizens. Their rights are as valuable as those of any big-spending campaign donor.

Despite repeated assurances from voter ID proponents that these laws aren’t discriminatory and are easy to comply with, lived experience proves the opposite.

Cinderria was finally able to obtain an ID, but only weeks after we first met; I traveled with her to the DMV to make sure nothing went wrong. Claudelle, a voter in his 60s whose mother mistakenly spelled his name “Clardelle” on his birth certificate, was refused an ID with his correct name twice. On a trip to the DMV with a 34-year-old named Zack, we were given inaccurate information on how to receive a free ID to vote. A recording of that interaction prompted a federal judge to order retraining of DMV workers across Wisconsin.

The voters affected by these laws — who, again, are more likely to be low-income, transient and elderly — often are unreachable through social media campaigns or other online communication. That makes in-person outreach indispensable. A young Madison woman named Treasure, for instance, was unable to obtain an ID until neighborhood canvassers knocked on her door and gave her accurate information and assistance.

Such work is not an admission that voter ID laws aren’t worth fighting; they are. It represents, rather, a commitment to fight suppression at every level. We have no choice but to organize, lace up our shoes and meet would-be voters where they live and work.

Molly J. McGrath is an attorney, voting rights advocate and organizer. She can be found @votermolly or votermolly.com