Teachers at the Paul Public Charter School in Washington DC are attempting to organize a union. If successful, they’d be the first unionized charter employees in the nation’s capital. Across the country, charter administrators and board members have generally fought union efforts. 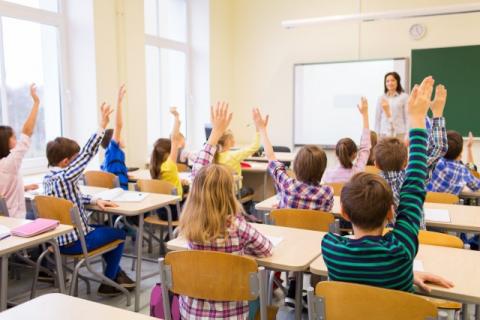 This morning [Feb. 22],  teachers at Paul Public Charter School, one of the oldest charters in Washington, D.C., publicly announced their intent to unionize—a first for charter schoolteachers in the nation’s capital. As in other cities where charter teachers have formed unions, the Paul educators are forming their own local—the District of Columbia Alliance of Charter Teachers and Staff (DC ACTS)—which will be affiliated with the American Federation of Teachers (AFT). Seventy-five percent of Paul’s teaching staff signed a petition in support of joining DC ACTS, and asked administrators to voluntarily recognize their union.

The Center for Education Reform estimates that 10 percent of charter schools are unionized nationally, up from 7 percent in 2012. As more and more charter teachers have launched organizing efforts, the absence of charter unions in Washington, D.C., has been notable—particularly given the city’s high density of charter schools. There are 118 charters—run by 65 nonprofits—within D.C., educating 44 percent of the city’s public school students.

Patricia Sanabria, a high school English and special education teacher at Paul, is excited about unionizing with her colleagues. Born and raised in Washington, D.C., Sanabria is a product of D.C. public schools, and spent two years teaching at Ballou High School, a traditional public school in one of the poorest parts of the city, before coming to her charter.

When she first started working at Paul—which educates about 700 students from grades 6 through 12—Sanabria felt very supported by the staff, which was much smaller than Ballou’s. “It felt more like a family, I felt a lot more at home,” she says. But over the past three years, that feeling has waned, and this year has been especially frustrating.

“When I first got here, the teacher in the classroom next to mine told me that charter schools are ‘teacher factories,’ and it's very true,” Sanabria says. “They keep giving us things to do, and they don’t take into account how much time that adds to our work day. I would say I’m pretty routinely here for ten hours or more a day, and that’s just not something you see in other professions, and certainly if you do see it, people are compensated for it.”

Sanabria thinks the working conditions negatively impact her school’s special education program, and she hopes a union can help improve it. “Part of that is linked to teacher retention and the hiring of teachers,” she explains. “I think [Paul] is not a very attractive one for special educators, who often have multiple degrees, because we don’t offer competitive salaries. If I had stayed working for DCPS I would be making more than $10,000 a year more than I am now as a fifth-year teacher.”

The first is that administrators brought in a consultant at the start of the 2015-2016 school year to launch a committee with teachers dedicated to discussing school improvements. After a series of meetings, teachers submitted a list of proposals to their administration, including such recommendations as more transparent staff evaluations, caps on class sizes, and increased time for teacher planning. But the suggestions went nowhere.

“Soft diplomacy has been tried,” says Dave Koenig, a government and history teacher at Paul, and the first person at his charter to reach out to the AFT.

“Nothing really came out of the consultant committee, nothing substantial, no major changes,” adds Katrina Foster, a special education coordinator who has been working at Paul for seven years. “So the union was just kind of the next step, [we] organically moved into starting this movement.”

Paul teachers also grew frustrated at the end of last year when the high school’s popular principal did not have her contract renewed. Educators say they were given no clear explanation for her firing, and the teachers rallied together for the principal’s reinstatement. Their efforts, too, went nowhere. For teachers like Koenig, that was the last straw.

“In my time here I’ve seen people who are really good, dedicated teachers shown the door because they have personality conflicts with someone above them. I’ve also seen really good people leave on their own because they feel underappreciated or overworked to the point of developing [a] nervous breakdown,” says Koenig. “I don’t want that to continue to happen. I want the staff to be stable and happy, and I think a union is part of how we get there.”

“I don’t think the union is for any one particular thing, but mainly to support staff, to give teachers a voice, and recourse,” says Foster.  Representatives from Paul Public Charter were not available for immediate comment.

Charter teachers in cities such as Chicago, Philadelphia, and New Orleans—where successful charter unions have taken root—have had the benefit of receiving help from their state teachers union. When charter teachers have just begun trying to launch a brand new local off the ground, state affiliates have provided them with valuable transitional support and bargaining staff. No such intermediate body exists for the District of Columbia.

The Washington Teachers Union (WTU), D.C.’s traditional public school teachers union, has also been particularly embattled in recent years. In 2007, the city hired a controversial schools chancellor, Michelle Rhee, who was empowered to make decisions largely without school board or city council approval. As charter schools expanded throughout the city, Rhee proceeded to fire hundreds of teachers from traditional public schools, and regularly engaged in high-profile fights with the WTU.

Rhee left in 2010, but the union has since struggled to find its footing and regain power. Its current president, Elizabeth Davis, was elected in 2013, and has spent the majority of her tenure trying to negotiate a new collective-bargaining agreement. Teachers have been working under a contract that expired back in 2012, and haven’t had a base-level salary increase since then.

In an interview with The American Prospect, Davis says she’s always been interested in helping support charter school organizing, and that her members are interested in it, too. “The first three years of my presidency just ended up being far more than I anticipated,” she says, in reference to the contract negotiations that have commanded the union’s attention and resources.

“But our union is going to support charter teachers organizing in any way we can,” Davis said. “We want teachers, irrespective of what schools they teach in, public or charter, to have a union.”

Paul charter teachers say they’re looking forward to forming DC ACTS, rather than joining the 4,000-member WTU, because it will allow them to build something from the ground up. “I think being in our own local, and such a small unit, is going to allow us the freedom to be creative and innovative in terms of what we negotiate for,” says Koenig.

Paul’s educators plan to organize under the jurisdiction of the National Labor Relations Board. Last summer, the NLRB issued a pair of decisions which said that charter school teachers are private employees who fall under the federal labor board’s purview. Even before the NLRB ruling, D.C.'s public employees’ labor board, which covers teachers and other staff in traditional public schools, had excluded charters from its purview.

If Paul Public Charter School administrators do not voluntarily recognize their teachers’ union, and challenge the NLRB’s jurisdiction should the staff then move for an election, the administration would effectively be saying that D.C. charter school teachers should have no formal rights under any labor board—public or private. Union opponents may see an opportunity to overturn the NLRB’s charter rulings in the Trump administration, given that Trump has named Philip Miscimarra as the board’s new acting chairman. Miscimarra was the sole dissenting voice in the 2016 charter school decisions, and argues that charter labor law should be left to state and local regulators.

Across the country, charter administrators and board members have generally fought union efforts, insisting that collective-bargaining agreements would inhibit charter school success and flexibility. Gina Mahony, the former vice president for government relations for the National Alliance of Public Charter Schools, a group that strongly discourages charter unionization, sits on the Paul Public Charter School’s board of trustees.

“This has always been partially political for me,” he says. “Problems we face at Paul are also problems in other charter and public schools. A really disturbing theme in education today is how teachers are treated so poorly, so that the good ones are pushed out, and automatons are brought in who are willing to simply teach skills for standardized tests. I think teachers unions are our only way to fight back against things like that, and unions in general are very important to fight back against a changing economy that crushes working people.”