food Chefs Struggle Over Whether to Serve Up Politics

As immigration dominates restaurant discussions, many chefs who have never considered mixing politics with business are wondering if now is the time to start. The sanctuary restaurant movement involves taking a pledge to prohibit harassment based on factors like religion, sexual orientation or immigration status. 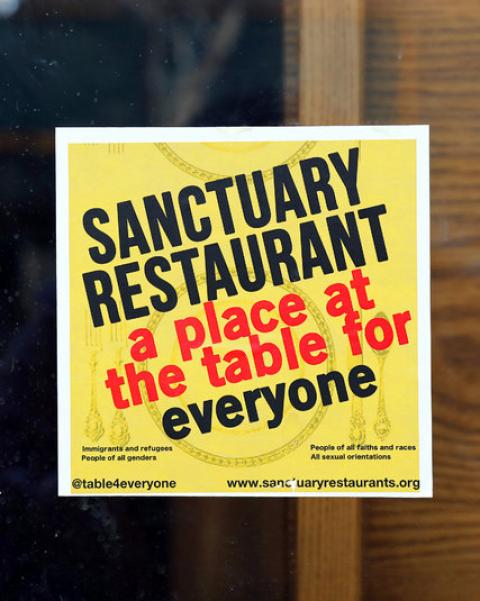 A sign in the window at Cafe Gabriela in Oakland, Calif., Jim Wilson/The New York Times

Meredith Coulson is trying to decide whether to hang up a sign declaring that the White Gull Inn in Fish Creek, Wis., is a sanctuary restaurant.

Her family’s lodge, which opened 121 years ago on the shores of Green Bay, is known for its cherry-stuffed French toast and whitefish boils. She is not sure she wants it to also be known for its politics.

Sanctuary restaurants are not like sanctuary cities, which have laws to protect undocumented immigrants. Joining the sanctuary restaurant movement doesn’t mean much more than taking a pledge to prohibit harassment based on factors like religion, sexual orientation or immigration status.

Although the Mexican members of her staff are legal immigrants, she said, they fear that if they travel home they may be detained — or worse.

“I feel bad that half the people who work here have to worry about their safety and well-being,” Ms. Coulson said. “That doesn’t seem right to us.”

On the other hand, she doesn’t want to alienate customers. “Fairness and equality don’t seem like they should be political,” she said. “But in the current climate, people who voted for Trump might feel personally attacked.”

Like many restaurant owners and chefs, Ms. Coulson is navigating new waters in a country divided. Among other hard-line stands, President Trump has vowed to impose tariffs on Mexican imports, and he has endorsed more aggressive deportation of people unauthorized to be in the United States — moves that could hurt the kind of food chefs cook, the people they hire to cook it and their bottom line.

As a result, many chefs who have never considered mixing politics with business are wondering if now is the time to start.

“I realize I wasn’t using my voice as much as I thought I was or maybe as much as I should,” said Kwame Williams, who, along with his sisters, runs the Jamaican restaurant Vital Dining in Montclair, N.J., and FreeTown Café in Newark. Mr. Williams was one of 15 chefs who met this week at Serenbe, a farming and residential community south of Atlanta, as part of the James Beard Foundation’s boot camps, which train chefs to shape food policy.

Interest in the boot camps has grown since the election. The waiting list has topped 800 for the seminars, which began five years ago and accommodate only 15 chefs at a time. The foundation plans to offer three this year.

The boot camps dissect issues, not politicians. “They have been declared a Trump-free zone, because chefs are not monolithic,” said Katherine Miller, the group’s senior director of food policy advocacy.

Similarly, registration for the National Restaurant Association’s public affairs conference in Washington this month is over 500, a record for the industry group, said Sarah Dolan, its media relations director.

Politics even seeped into the recent South Beach Wine and Food Festival, five days of cooking and drinking in Miami Beach that some people call “spring break for chefs.” Organizers staged a tribute dinner for José Andrés, the Spanish-born chef who has become a charismatic leader of the restaurant industry’s battle over immigration.

Mr. Andrés has been locked in a legal battle with Mr. Trump since the chef pulled out of a deal to open a restaurant in the new Trump International Hotel in Washington, citing disparaging remarks about Mexican immigrants that the president made during his campaign.

For the first time, the South Beach festival held a panel titled “Politics Do Belong at the Dinner Table,” in which immigration dominated the discussion. One panelist, the chef and TV personality Andrew Zimmern, said he had received calls from employees in his production company asking if he could hide immigrants in his unused cabin in Minnesota. People are very fearful, he said, and may soon start leaving the country to avoid being picked up by Immigration and Customs Enforcement officers.

“This is going to hit Americans in their pocketbooks,” Mr. Zimmern said, “and start changing the tone of discourse in Washington very, very, very quickly.”

Farms and restaurants rely on a substantial number of the estimated eight million unauthorized immigrants working in the United States. The Pew Research Center estimates 12 percent of restaurant workers are undocumented. The Economic Policy Institute puts the figure closer to 16 percent.

As many as 45 percent of restaurant workers in large cities like New York, Chicago and Los Angeles are undocumented, said Saru Jayaraman, the lawyer who helped start Restaurant Opportunities Centers United, the group behind the sanctuary restaurant movement, which offers training for business owners and information for workers on what to do during an immigration raid.

Many chefs admit that some of their workers are probably undocumented but have used fake Social Security numbers to get on the payroll. In some states, private businesses of a certain size, including restaurants, are required to use a federal system called E-Verify to check the numbers, but some opt out, preferring to take a chance on a fine.

Although there is scant evidence that ICE officers have conducted wholesale raids on restaurants, chefs worry that they might start. A bigger concern, though, is that employees and their families may be scooped up outside work and deported.

Chefs in Northern California have set up a phone tree to warn one another if restaurants start getting raided. Undocumented workers at a popular barbecue restaurant in Chapel Hill, N.C., have stopped driving, relying instead on fellow employees with proper documentation to get them to work.

At a well-known restaurant nearby, a chef who asked that his name not be used so he would not become an enforcement target arranged last week to take over guardianship for 13 of his staff members’ children in case their parents are deported.

Immigration is one issue that unites many chefs on either side of the political divide, said Michel Nischan, a registered Republican who in 2007 helped start Wholesome Wave, which began a program that doubles the value of Supplemental Nutrition Assistance Program, or SNAP, benefits at farmers’ markets. He also helped start the Beard Foundation policy boot camps.

“Frankly, the conservative chefs and the liberal chefs come down on the same place,” Mr. Nischan said. “It would be bad for business.”

Edward Lee, a chef who owns three restaurants in Louisville, Ky., and Washington, said the issue went beyond business. Younger chefs in particular have grown up with a heightened awareness of civic responsibility. “You don’t really have a choice to be idle or neutral,” he said. “To me, politics has always been a means to an end of improving the community we live in, so I use my restaurants as a tool to do just that.”

Mr. Lee donates to the local police department and to Christian charities. He supports a program to train young people from disadvantaged neighborhoods to cook, and another that offers services for lesbian, gay, bisexual and transgender youths. Recently, he bought 100 copies of the book “Why We March,” which raises money for Planned Parenthood. He is giving them away at his restaurant 610 Magnolia.

For years, chefs have been hosting fund-raisers, cooking for charities and starting foundations. Mostly, their causes have been connected to food and farming issues. But over time, chefs began inserting themselves more directly into issues of governance, learning enough about the farm bill and nutrition policy to lobby local and national lawmakers.

The political role for chefs grew stronger in 2010, when Michelle Obama invited more than 500 to the White House, asking that they lobby Congress to pass a stronger school nutrition bill and adopt a school in their communities in need of better lunches or a garden. Two years later, Tom Colicchio helped start Food Policy Action, the first chef-led political group to attend both national party conventions last year with the aim of making food policy a higher priority for lawmakers.

Even chefs wanting nothing to do with politics or policy find themselves having to figure out where they stand on an increasing number of restaurant-related issues, including foie gras, calorie counts and concealed weapons.

Since the election, some chefs have been tiptoeing in, aware of the potential backlash from customers and mindful of episodes like the so-called Pizzagate, in which a conspiracy theory linking human trafficking, the Democratic Party and a string of restaurants prompted a man to fire three shots inside a Washington pizzeria. Others, especially high-profile chefs like Mario Batali, are under attack from social media followers who think they should stick to cooking.

The Chicago chef Stephanie Izard said she sat in on the politics panel at the South Beach festival because she was trying to decide how much to get involved. She allowed some of her employees to skip work for a recent “day without immigrants” protest but didn’t let others organize a fund-raising dinner for Planned Parenthood.

“What’s happening makes you want to get involved more,” she said. “But I still don’t know what the best route for that is.”

Other chefs have decided the best approach is to engage with customers with a differing stance. For Mary Lyski, declaring Double Comfort, her Southern restaurant in Columbus, Ohio, a sanctuary restaurant was no stretch: The restaurant already donates all of its profits to local food pantries.

But it was a problem for some customers, including a Trump supporter. “He felt he was being discriminated against by liberals, and I can’t blame him,” she said. “Everyone is so vocal and so mad right now.” Through a series of emails, they came to a resolution. He ended his last email, Ms. Lyski said, by asking: “Will there still be a seat at the table for me? I promise not to wear anything Trump.”

Because of an editing error, an earlier version of a picture caption with this article incorrectly described Meredith Coulson’s stance on the sanctuary restaurant movement. She is deciding whether to affiliate her family’s lodge, the White Gull Inn, with the movement. She is not part of the movement.

A version of this article appears in print on March 15, 2017, on Page D1 of the New York edition with the headline: Putting Politics on the Menu. Order Reprints| Today's Paper|Subscribe