Gorsuch Would Use "Originalism" to Affirm Right-Wing Agenda

Largely discredited by courts and legal scholars, originalism is ultimately a way to reach a right-wing result under the guise of following the original intent of the authors of the Constitution. 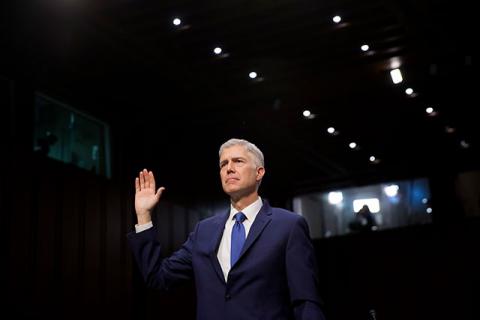 Judge Neil Gorsuch, President Trump's nominee for the Supreme Court, is sworn in on the first day of his confirmation hearing before the Senate Judiciary Committee on Capitol Hill, in Washington, March 20, 2017. ,Eric Thayer/The New York Times

Largely discredited by courts and legal scholars, originalism is ultimately a way to reach a right-wing result under the guise of following the original intent of the authors of the Constitution.

After Scalia's death, Gorsuch paid tribute to him by endorsing Scalia's originalism, writing:

Judges should instead strive (if humanly and so imperfectly) to apply the law as it is, focusing backward, not forward, and looking to text, structure, and history to decide what a reasonable reader at the time of the events in question would have understood the law to be -- not to decide cases based on their own moral convictions or the policy consequences they believe might serve society best.

Indeed, Scalia professed to look backward, not forward, when judging, noting: "The Constitution that I interpret and apply is not living but dead, or as I prefer to call it, enduring. It means today not what current society, much less the court, thinks it ought to mean, but what it meant when it was adopted."

In 2001, Scalia addressed his method of constitutional analysis at a program at Thomas Jefferson School of Law. He chided his colleagues on the Court, whom he called "evolutionists." Scalia's fellow justices would likely agree with Justice Thurgood Marshall, who expressed a similar sentiment in his 1987 constitutional bicentennial speech: "I do not believe that the meaning of the Constitution was forever fixed at the Philadelphia convention ... the true miracle was not the birth of the Constitution, but its life, a life nurtured through two turbulent centuries of our own making."

Scalia criticized the "evolutionists" for their lack of a theory. "I have a theory," he told us. "It is original. If you convince me that this is the way it is in 1791 [when the Bill of Rights was adopted], you got me." He added, "Seems to me you have to be limited by whatever is said in the text of the document.... I look at the text, I say it's not in the text; it was never the constitutional tradition."

Let's look at the text of the Constitution. The Supremacy Clause, Article VI, section 2, says that "all Treaties made, or which shall be made, under the Authority of the United States, shall be the supreme Law of the Land; and the Judges in every State shall be bound thereby, any Thing in the Constitution or Laws of any State to the Contrary notwithstanding."

During Scalia's visit to Thomas Jefferson School of Law in San Diego, California, I cited the Supremacy Clause to him and asked him why the Court didn't use more treaty principles in its decisions. He replied that treaties aren't binding unless they're implemented, or "executed" by an act of Congress. I went back and read the words in Article VI, section 2, looking in vain for text that said treaties only become the supreme law of the land once they've been executed.

Scalia was referring to the doctrine of self-executing versus non-self-executing treaties established by Chief Justice John Marshall in Foster v. Neilson, 42 years after the Constitutional Convention. Marshall first defined treaties that "are in fact law of the land of their own accord," now called "self-executing." But Marshall said other treaties, which create an obligation the United States promises to perform, must be executed (through implementing congressional legislation) before they become binding.

Scalia apparently had no quarrel with the fact that nowhere in the text of the Supremacy Clause did the words "self-executing" appear. Nevertheless, this doctrine has become an accepted part of our jurisprudence. While non-self-executing treaties don't provide a basis to bring a lawsuit as a plaintiff, they can be raised as defenses in civil or criminal cases and used as an interpretive tool.

Scalia had overlooked The Paquete Habana, in which the high court ruled that customary international law is "part of our law, and must be ascertained and administered by the courts of justice of appropriate jurisdiction, as often as questions of right depending upon it are duly presented for their determination."

In his dissent in Thompson v. Oklahoma, in which the Supreme Court struck down capital punishment for 15-year-olds, Scalia dismissed the international customary law of human rights. And when he wrote the decision in Stanford v. Kentucky, permitting the execution of a 16-year-old, Scalia rejected the contention "that the sentencing practices of other countries are relevant" to American standards of decency.

In his talk at Thomas Jefferson,, Scalia repeatedly mocked the well-settled doctrine that the human rights provisions of the Bill of Rights should be analyzed in light of "the evolving standards of decency that reflect a maturing society," first enunciated in 1958 by the Court in Trop v. Dulles. Scalia ridiculed his colleagues who followed that doctrine as "evolutionists." Scalia's "scientific" analysis, however, required him to divine the intent of the authors of the Constitution, a highly subjective endeavor.

According to Ayesha Khan, former legal director of Americans United for Separation of Church and State, "The argument of originalists like Gorsuch is always, 'Well, I'm just following the law.' But it's intellectually dishonest to pretend you can somehow divine the original founders' intent." Khan wrote several amicus briefs in cases on which Gorsuch ruled.

Originalism Would Lead to Disturbing Results

Harvard law professor Cass Sunstein, who calls originalism "the Time Machine approach to constitutional interpretation," maintains that the doctrine could lead to the following:

UC Irvine School of Law Dean Erwin Chemerinsky concurs. Writing recently in the Los Angeles Daily News, he noted that if a majority of the justices accepted originalism, many now-established rights would disappear: The Bill of Rights would no longer apply to state and local governments; the rights to travel, privacy and freedom of association -- which are not mentioned in the text of the Constitution -- would no longer be protected; and there would be no more protection of the rights to marry, procreate, purchase and use contraceptives, obtain abortions, refuse medical care, and engage in private consensual homosexual activity.

Indeed, when the high court found a constitutional right to marriage equality, over Scalia's objection, in Obergefell v. Hodges, the majority "expressly rejected originalism and embraced the idea of a living Constitution whose meaning evolves by interpretation," Chemerinsky observed in the National Law Journal.

"The bottom line is the views of many self-proclaimed originalists line up, not with those of We the People in 1789, but with those of the right-wing of the Republican Party in 2017," according to Sunstein. "Whether we're speaking of campaign-finance laws, commercial advertising, gun rights, affirmative action, gay rights, property rights or abortion, originalism has failed to prevent judges from voting in accordance with their political predilections."

Sunstein explains that in these contexts, judges who characterize themselves as "originalists" have nevertheless made decisions that reflect their regressive political positions.

"Too often, today's originalists read the Constitution to fit with the latest Republican Party platform, while solemnly proclaiming their reverence for the founding period and their own political neutrality," Sunstein wrote on Bloomberg.com. "That's shameful -- and it's a sham."

Gorsuch has ruled against protections for people with disabilities, expressed disapproval of LGBTQ people's equal rights, found that corporations are "persons" that can claim religious rights, favored big corporations over workers, and lined up with polluters against agencies charged with protecting clean air and water. Based on his previous rulings and writings, he would likely conclude that the Constitution does not protect the right to abortion.

In 2005 to 2006, while serving as principal deputy associate attorney general in the Bush Department of Justice, Gorsuch argued against Guantánamo detainees who sought to bring habeas corpus petitions to challenge their detention, opposed the Detainee Treatment Act's prohibition of cruel treatment, argued that "enhanced interrogation" (a euphemism for torture) works, and defended Bush's warrantless surveillance program. Sen. Patrick Leahy (D-Vermont) said Gorsuch "appear[ed] to be a cheerleader for President Bush's views on executive powers."

After visiting Guantánamo, where guards were violently force-feeding prisoners, Gorsuch wrote to the prison operation commander, "I was extraordinarily impressed. You and your colleagues have developed standards and imposed a degree of professionalism that the nation can be proud of, and being able to see first hand all that you have managed to accomplish with such a difficult and sensitive mission makes my job of helping explain and defend it before the courts all the easier."

Gorsuch, who handled all "terror litigation" in his Justice Department office, would likely be receptive to upholding Donald Trump's Muslim Ban when the issue of its legality inevitably reaches the Supreme Court. Jennifer Daskal, Just Security's founding editor, predicted, "He could end up being the decisive vote in a range of future cases that involve executive branch policies that push at, or cross, the line of legality -- defended based on expansive claims of unreviewable executive authority in the arena of national security."

Americans should be "deeply concerned that [Gorsuch] won't be a meaningful check on Donald's Trump's illegal and unconstitutional agenda," said Marge Baker, executive vice president of People for the American Way.

If confirmed to the Supreme Court, we can expect Gorsuch to use his originalist theory to uphold a dangerous right-wing agenda.

Marjorie Cohn is professor emerita at Thomas Jefferson School of Law, former president of the National Lawyers Guild and deputy secretary general of the International Association of Democratic Lawyers. Her books include The United States and Torture: Interrogation, Incarceration, and Abuse; Cowboy Republic: Six Ways the Bush Gang Has Defied the Law and Drones and Targeted Killing: Legal, Moral, and Geopolitical Issues. Visit her website: MarjorieCohn.com. Follow her on Twitter: @MarjorieCohn.