How Opposition to World War One Galvanized the Left

An interview with historian Michael Kazin. Michael Kazin’s book War Against War: The American Fight for Peace, 1914-1918 tells the story of these Americans, who tried to prevent the militarization of the United States. 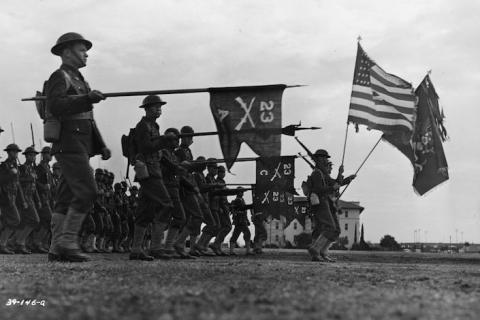 On April 6, 1917, the United States entered World War I. For three years before, activists and legislators had urged lawmakers not to join this unprecedented “war to end all wars,” and their efforts had enjoyed significant public support. But as German aggression mounted—and as Germany courted an alliance against the United States with Mexico—the US was dragged into the conflict. The anti-war movement’s aims shifted from preventing military preparedness to opposing the draft and the war itself, even while its leading figures were subjected to censorship and surveillance.

Michael Kazin’s book War Against War: The American Fight for Peace, 1914-1918 tells the story of these Americans, who tried to prevent the militarization of the United States. As Kazin argues, this was not an isolationist movement afraid of engagement with the broader world; peace activists worked with allies abroad from both sides of the conflict, and fostered visions of an international organization for peace. Nor was the anti-war movement a passion project for one type of idealist—it was a coalition of Americans against the perceived “jingoism” of capitalists and militarists, united against a corrupt economic elite who they felt would use war as a for-profit industry

With this book, Kazin offers a portrait of a rare kind of bipartisan political resistance, as well as a glimpse into a key moment for the American left, when interest in socialism surged but before it was burdened by associations with the Soviet Union. We talked about this history and its reverberations today, when the left has thrown its energies into resisting Trump. The following conversation has been edited for clarity.

The New Republic: You’ve said that you’d never written a book about a war or an anti-war movement before. What made you write about this now?

Michael Kazin: The United States has been at war for most of its history. But the anti-war movements that have existed have been pretty short lived and have not gotten much attention from scholars or from journalists, really, except right during the wars themselves. Anti-war movements have not been successful for the most part (except, arguably the movement, against the Vietnam War). Yet, I think if you understand American history as a history of war, you also have to look at the people who opposed those wars.

TNR: Your book is specifically about the opposition to World War I.

Kazin: It was a very diverse coalition: Democrats, Republicans, conservatives and radicals, different races. The purpose of the book is not just to tell forgotten stories, which is important itself, but also to question the conventional wisdom that these people who opposed the war were isolationists who didn’t want the United States to be involved in trying to make a better world. Everybody I write about had a really strong understanding and vision of the kind of world they wanted to build. It just didn’t involve having a large military and going into what was then the bloodiest war in history.

TNR: Who were the main figures in this movement?

Kazin: I focus on four figures who I think were important because each of them led a key faction in the coalition. One was Crystal Eastman, a fairly young woman who was a very active suffragist, a member of the Socialist Party for a time, and a leader of a strong feminist movement of that period. She was a key organizer of antiwar groups, the Women’s Peace Party of New York and the American Union Against Militarism, and later on she became the co-editor of the Liberator magazine. The other figure on the activist side was Morris Hillquit who was a liberal lawyer, an immigrant born in Latvia. He was the Socialist Party’s key emissary to Socialist parties in Europe, which were much larger and stronger than the American Socialist Party was.

There were also two figures in Congress. Robert La Follette, a senator from Wisconsin, who was very pro-labor and very involved in international peace movements; he was the leader of the progressive Republicans. The fourth figure was Claude Kitchin, a Democratic congressman from North Carolina and the Majority Leader of the House during the war. He was also a white supremacist and one of the people involved in basically disenfranchising African Americans in North Carolina. He was very much a populist with a small “p,” opposing the power of Wall Street munitions makers in the economy, which he thought would only grow if the US went to war.

It’s important to understand, these figures came from different places demographically and ideologically, but they all agreed that having a much larger military and then going to war would make America a very different place and they all opposed that.

TNR: Your book depicts this moment when the radical left in general seemed to have a chance, which then got kind of crushed by censorship, by the war and buried in history.

Kazin: There’s a debate among historians. There was an older view that World War I was central to the decline of the Socialist Party. American socialists, unlike most socialists in Europe, actually, opposed their country going to war, and were repressed in different ways because of that. Eugene Debs, a leader of the Socialist Party, was put into jail for giving speeches against the war.

But James Weinstein, who founded In These Times, argued that the socialists benefitted from becoming the main agencies and voices opposing World War I. Morris Hillquit was able to get 22 percent of the vote in his run for mayor of New York City in 1917, which is a far, far higher percentage than any socialist ever got before. Plus, socialists did pretty well in the off-year local elections of 1917.

I think, really, what caused problems for the Socialist Party is when in 1919 they split, and a lot of socialists become communists. And the Communist Party by the 1930s became a more important part of the left, which is good in that the communists organize labor unions and civil rights groups and so forth. But at the same time, clearly, the association with the Soviet Union and Joseph Stalin was a non-starter for most Americans.

TNR: Do you think the effects of this period reverberate on the contemporary left?

Kazin: Today, the Cold War is long over. Socialism has lost many of the negative connotations it had, being associated with the Soviet Union. I think one of the reasons why Democratic Socialists of America has grown and why Bernie Sanders could run as social democrat is because, in some ways, we’re returning to the kind of socialism that Eugene Debs believed in and talked about.

To a degree, I mean. He believed in revolution; Bernie Sanders does not believe in revolution. But I think it would be a good thing if we revived the memory of the pre-World War I and World War I Socialist Party. That was the heyday of socialism in America. It was a socialism that helped to promote support for things we now take for granted like Medicare and Social Security, and—if you’re a progressive—labor unions and progressive income tax. Women’s suffrage too, for that matter.

TNR: You mention in the book that building a peace movement isn’t like working on any other issue, where the movement can grow gradually. It needs to come together on a moment’s notice. Obviously there are a lot of differences, but it does kind of feel like that right now on the left with the need for an anti-Trump movement—very suddenly we have to spring together to block imminent policy decisions that could have very swift, very dramatic consequences.

Kazin: On the one hand, people oppose Trump for all kinds of reasons: his authoritarianism, his terrible positions on the environment, labor, on women’s rights, on black rights, etc. So that’s not like the war against war. Obviously, they had one big cause to unite them.

What’s the same both now and then is that social movements that are opposing people in power need to have an inside/outside strategy. They have to do the kind of things these people are doing: demonstrating in the streets, going to congressional meetings, if they’re lawyers supporting amicus briefs, building on institutions, subscribing to magazines on the left. On the other hand, they also have to find allies within the structures of power, and that means Democrats and perhaps some Republicans.

And that was true in World War I, too. There was a concerted effort to try to stop bills to expand the military. There were efforts once the war started to make sure that the rich would pay for it. Claude Kitchin was a very important part of that because all spending bills have to start in the House and he was chair of the Ways and Means Committee as well as the Majority Leader. So this Dixiecrat was responsible, in part, for having a more progressive tax system, because he thought the war was wrong. He said, well, if we’re going to have a war then the rich will have to pay more for it.

TNR: If today’s left were to take one lesson from this period in history, what should it be?

Kazin: I hesitate to offer “lessons” from something that occurred a century ago. This is particularly true because anti-war movements are different from other kinds of social movements, and there is not much of a peace movement around now.

Still, the contemporary American left (by which I mean, liberals and radicals) should emulate the strategy the anti-war coalition followed from 1914 to 1918: Organize local groups, put on imaginative kinds of protests, exclude no one who supports your basic demand(s), and work with elected officials who are sympathetic to you but don’t depend on them to remain steadfast when times get rough. In the end, you have to convince a majority of Americans or, at least, persuade them not to support your opposition.

Juliet Kleber is a reporter-researcher at The New Republic.