Take Action to Break the Silence, 50 Years Since Dr. MLK's 'Beyond Vietnam' Speech

Beginning this week, on April 4, peace-loving people around the country are participating in actions honoring Dr. King and readings of this speech, in a campaign to rebuild our movement. There's still time to join or host an event in your community. UFPJ has created a page with resources for you and your organization to host a reading. You can also sign-up right now to participate in a Thunderclap social media campaign with our partners from Veterans for Peace. 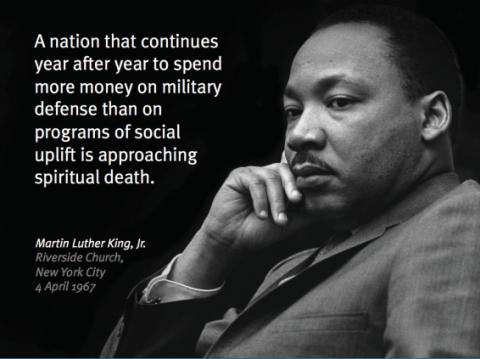 A Call to Conscience. MLK’s Beyond Vietnam: A Time to Break Silence. Relevance to U.S. Wars and Militarism Today

50 years ago, on April 4, 1967 at Riverside Church, in NYC, Martin Luther King delivered his powerful and most controversial speech, “Beyond Vietnam: A Time to Break Silence”.   No longer willing to keep silent about the immorality of the Vietnam War, knowing the intense criticism he would receive for speaking out, he nevertheless was compelled to speak, “I am here tonight because my conscience leaves me no other choice”.

King spoke against war and its crippling effects on social progress.  He denounced the death and destruction in Vietnam and the waste of billions on an immoral war.  All this at the expense of the poor and those serving in the military.  The destruction done to the Vietnamese is the same destruction we are doing to the Afghans, Iraqis, Syrians, Yemenis, Somalis, Libyans, Pakistanis, and others today.

“A nation that continues year after year to spend more money on military defense than on programs of social uplift is approaching spiritual death.”

I am as deeply concerned about our own troops there as anything else.  For it occurs to me that what we are submitting them to in Vietnam is not simply the brutalizing process that goes on in any war where armies face each other and seek to destroy.  We are adding cynicism to the process of death, for they must know after a short period there that none of the things we claim to be fighting for are really involved.  Before long they must know that their government has sent them into a struggle among Vietnamese, and the more sophisticated surely realize that we are on the side of the wealthy, and the secure, while we create a hell for the poor.

King connected the inherit racism of killing the Vietnamese people with the killing of black people in America through dehumanization and contempt for “other” people.

King was greatly concerned that the war in Vietnam was destroying the soul of America.  He called for an end to the war, detailing how a foreign policy based on violence and domination abroad, relates to the violence and problems we are afflicted with at home.  He asked us to reassess our values to avoid future mistakes that could destroy our nation.

“We must rapidly begin the shift from a “thing-oriented” society to a “person-oriented” society.  When machines and computers, profit motives and property rights are considered more important than people, the giant triplets of racism, materialism, and militarism are incapable of being conquered.”

King’s message was not heeded, and our problems have multiplied.

Since 1991 the U.S. has been at war in the Middle East, destabilizing the whole region.  In 2016 the U.S. dropped bombs in seven countries:  Afghanistan, Iraq, Syria, Yemen, Libya, Pakistan & Somalia.

The U.S. is the world’s #1 exporter of arms.  We have more than 800 bases in over 70 countries.  U.S. Special Forces have been deployed in over 105 countries.   We have launched thousands of drone strikes.

Our Congressional representatives are cowards.   They are willing to send ground troops into the war in Afghanistan, Iraq and now Syria, while refusing to debate and vote on the use of military force.  Instead they shamefully forego their constitutional duty, to avoid being held accountable to their constituents.

Congress has voted to spend our taxpayers’ dollars on endless wars at the expense of everything else.  Total defense spending costs our country approximately $900 billion (that’s almost $1 trillion) each year. This $900 billion pays for cost of war, 800 bases, nuclear weapons, intelligence agencies, homeland security, and veterans benefits.   Economist Jeffrey Sachs stated “The U.S. is incurring massive public debt and cutting back on urgent public investments at home in order to sustain a dysfunctional, militarized, and costly foreign policy.”

The Cost of War project at Brown University reports that war costs since 2001 will run to nearly $5 trillion.  “Yet the cost seems invisible to politicians and the public alike.  The reason is that almost all of the spending has been financed through borrowing – selling US Treasury Bonds around the world – leaving our children to pick up the tab.  Consequently, the wars have had little impact on our pocketbooks.”  “As long as the cost of the war remains hidden from public view, there is no pressure to reexamine our military strategy.” (Linda Bilmes)

And now we have Trump’s budget proposal.  He is asking for an additional $54 billion to the budget busting $596 million the Pentagon is already allocated.  The Pentagon’s budget is larger than the budgets of the next 7 countries combined.   That proposed increase alone is almost as large as Russia’s entire military budget.  Trump proposes to finance his expanded war budget by making drastic cuts to the EPA, Dept. of Education, State Dept., the UN and its humanitarian aid, and social services.

These cuts will have devastating effects on the environment, our children’s education, the ability to prevent war through diplomacy with cruel cuts to social services for the poor, sick and elderly.

We have a choice about how this country spends our taxpayer dollars.  We can remain silent allowing billions to be spent funding endless, futile wars or we can speak out, demanding our tax dollars fund healthcare for all Americans, support climate change initiatives, invest in solar and renewable energy, improve our educational system providing free college, rebuild our infrastructure and end extreme poverty in this country.

We can no longer remain silent.  We must challenge American militarism.

MLK’s Challenge to Us

“Our only hope today lies in our ability to recapture the revolutionary spirit and go out into a sometimes hostile world declaring eternal hostility to poverty, racism, and militarism.”

“We still have a choice today, nonviolent coexistence or violent co-annihilation.  We must find new ways to speak for peace and justice throughout the developing world a world that borders on our doors.  If we do not act we shall be dragged down the long dark and shameful corridors of time reserved for those who possess power without compassion, might without morality, and strength without sight.”

“Now let us begin. Now let us rededicate ourselves to the long and bitter – but beautiful – struggle for a new world.  Shall we say the odds are too great?  Shall we tell them the struggle is too hard?  The choice is ours, and though we might prefer it otherwise we must choose in this crucial moment of human history.”

Beginning this week, on April 4, peace-loving people around the country are participating in actions honoring Dr. King and readings of this speech, in a campaign to rebuild our movement. There's still time to join or host an event in your community.

UFPJ has created a page with resources for you and your organization to host a reading.

You can also sign-up right now to participate in a Thunderclap social media campaign with our partners from Veterans for Peace.