‘We All Know Someone’: Tribal Community, Advocates Seek to Honor Missing and Murdered Native American Women

"It’s a hard struggle when a member of your family passes away. But this Day of Awareness can mean that her memory will live on forever.” 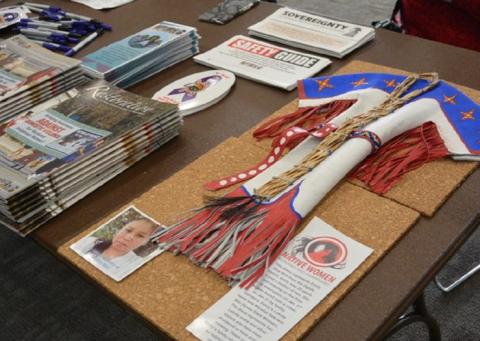 The traveling display, part of the organization’s Murdered and Disappeared Native Women project, includes a miniature dress representing a Native American woman or girl who has gone missing or been murdered. ,Paula Julian of the National Indigenous Women’s Resource Center

“We all know someone,” said Tami Truett Jerue, executive director of the Alaska Native Women’s Resource Center during the briefing. She noted that although Alaska Natives are 16 percent of the population in Alaska, they make up 28 percent of the murder victims. (The statistics refer to all Alaska Natives, including women.)

The briefing corresponded with efforts by congressional representatives to declare May 5 as a National Day of Awareness for Missing and Murdered Native Women and Girls.

According to Daines, the national day is proposed in memory of Hanna Harris, a 21-year-old Northern Cheyenne woman born on that day. More than three years ago, in July 2013, Harris went missing and was found murdered several days later.

“Before we can address and end any injustice, we must first acknowledge the injustices,” said Cherrah Giles, board chair of the NIWRC.

“This Senate resolution is the beginning of that acknowledgment. Stand with us on May 5 to acknowledge and honor Indian women who are missing or murdered. As we come to understand the roots of violence against Indian women, we can continue to remove the barriers to their safety,” she said during the briefing.

There is no comprehensive data collection system regarding the number of missing and murdered Native American women and girls in the United States. Some reservations, however, report that women are murdered at more than ten times the national average, and a congressional study found that between 1979 and 1992 homicide was the third leading cause of death among Native American women ages 15-to-34, as reported earlier at Rewire and the Indian Country Media Network.

One has only to live on a reservation or speak to members of the communities to know that rates of missing and murdered women and girls are high. Nearly every Native family has a story of a female relative who is missing, murdered, or whose murder has gone unsolved.

Despite the current dearth of official data, Native American families and advocates persist in calling public and political attention to an issue that they know looms large in Indian Country.

So much has happened for Limberhand since that terrible July 3 day when her daughter went missing, followed by the horror of learning of her murder and the interminable work of convincing authorities to pursue prosecuting Harris’ assailants.

Police were reluctant to take a missing person report or initiate a search, and once Hanna’s body was found, the police were also slow in investigating, according to Limberhand. Although Limberhand had little personal experience of murder, she soon found herself connected to a national Native family of those who advocate on behalf of missing and murdered Native women.

She recalled in an interview with Rewire that July 4 day in 2013 vividly. It was the beginning of her Kafkaesque journey through the maze of police responsibility and jurisdiction in Indian Country.

She’s probably just out drinking somewhere and afraid to come home. Limberhand will never forget these words spoken to her by a tribal police officer when she first reported her daughter missing on the Northern Cheyenne Indian Reservation.

“Since it was the July 4 weekend, he wanted us to wait and give her some time to come home,” Limberhand said.

Limberhand, however, knew that something was seriously wrong. Her gut told her that time was of the essence.

“We were watching her baby. She was breastfeeding him and always contacted us every 4-5 hours,” Limberhand said.

After lukewarm responses to the missing person report from federal authorities and the Bureau of Indian Affairs (BIA), Limberhand soon saw that she and her family were on their own.

In desperation, she used the telephone, social media, posters, and word of mouth asking for help in finding Hanna. She pestered local media to do stories about her daughter’s disappearance. A cousin helped organize a search with volunteers from a Montana search and rescue group.

Harris’ car was found abandoned on the reservation with two flat tires.

At last, according to Limberhand, the BIA police got involved. Officers arrived at her door on the evening of July 8 with news that they had found a woman’s body in a ditch by the reservation’s rodeo grounds. They wanted to know if Harris had any tattoos or other identifying marks.

“I told them she had her Indian name, Amesekehae’e (Pemmican Woman), tattooed on her back,” she said.

For an agonizing two hours she waited to hear the news she already knew in her heart was true. Police had found Harris’ brutally beaten, decomposed body earlier that day. She had been sexually assaulted.

By this time, Limberhand had already learned via the “moccasin telegraph” (word of mouth) who was likely responsible for Harris’ death. On reservations, where everyone knows everyone, news travels fast.

Limberhand suspected a couple, Eugenia Ann Rowland and Garrett Wadda, who had been seen earlier in the day with Harris on July 3 were involved; she told police her suspicions when Harris’ body was found.

Unfortunately, killers are often known by members of the community to be involved with murder on the reservation, according to Carla Cheyenne of Rapid City, South Dakota.

Cheyenne’s niece Emily Blue Bird, 24, went missing on the Pine Ridge Indian Reservation in early January 2016; a volunteer search party organized by family on January 21, 2016, found her body. The young mother of two had been murdered.

“People are afraid to come forward with information,” Cheyenne said. “They fear retaliation by friends or relatives of the accused.”

Undeterred by police inaction, Limberhand kept up the pressure. Soon victims and women’s advocates from all over the United States and Canada who helped organize rallies not only on the Northern Cheyenne Indian Reservation but also in Billings and other cities joined her.

The attention prompted tribal leaders to respond. Acting Northern Cheyenne Chairman Winfield Russell told the Billings Gazette that he was pledging his support to reform the tribal justice system.

He also brought the example of Harris’ death to the attention of Montana state legislators.

Limberhand now works with other families who are going through similar ordeals. “It was a new experience for our family. My best advice for others is to contact the media, don’t give up or let anyone tell you [that] you are doing this for nothing,” she said.

“Police try to dismiss missing persons and murder reports by claiming the women were out partying or drinking,” Limberhand said.

“It doesn’t matter if they were drinking or had violent pasts. They were still killed,” she said.

“It’s a hard struggle when a member of your family passes away. But this Day of Awareness can mean that her memory will live on forever. I hope it shines a light of hope for other families.” Limberhand said.

For its part, NIWRC is advocating for change in laws and funding for Native American women while it also takes immediate action. The organization published a toolkit for action, called “Tribal Community Response When a Woman is Missing,” that outlines a course of action for family and friends to take in addition to contacting law enforcement.

It also encourages communities and advocacy programs to develop protocols for missing women ahead of time. “The disappearance of every Native woman requires an immediate response,” according to the toolkit authors.

Rather than wait for law enforcement to determine which jurisdiction should respond to emergencies in Indian Country, citizens and advocates are working to develop existing community resources to address problems more immediately.

For instance, since Native American women are also twice as likely than other groups to experience rape or sexual assault and two and a half times more likely than others to experience violent crimes in their lifetimes, NIWRC and the National Domestic Violence Hotline announced on March 7 the launch of StrongHearts Native Hotline. The service is a free help line, created by and for Native Americans, offering culturally relevant, safe, and confidential resources for survivors of domestic and dating violence.

During the February congressional briefing, Amanda Takes War Bonnet, public education specialist for the Native Women’s Society of the Great Plains (NWSGP), shared information about her organization’s work to encourage Native American communities to create their own protocols for responding to reports of missing women and girls.

“One of the frustrations that law enforcement face today is that when a woman is murdered, no one quite knows what level of jurisdiction should prevail; we have several layers of jurisdiction, including tribal, county, state, and the federal level and the immediate task is to try to quickly determine who is responsible for the investigation. Many times there [are] just not enough resources available for law enforcement,” Takes War Bonnet said.

She brought a display that is being used by NWSGP to promote community awareness and foster coalitions that can help connect people with resources if their loved ones go missing.

“Since dress has traditionally been the way that Native women identify themselves, the miniature dresses are especially appropriate,” Takes War Bonnet said.

“We kept notes on every conversation we had with police. We wrote down every tip and followed them up ourselves,” said Cheyenne.

“I was determined that the search and investigation would not die out like so many others before,” she said.

Blue Bird’s case helps illustrate that although tribal communities may be poor, they do indeed possess resources.

“We have means of communication in our tribal communities that are effective: We have radio, news, posters, PSAs [public service announcements], social media, word of mouth, just to name a few,” Takes War Bonnet said.

“We need a groundswell of awareness and the development of protocols at a grassroots level. Many times it is left up to the family to begin the search and to find resources and to look for community influence,” she added.

A Cheyenne proverb, appearing on the back cover of each issue of Restoration Magazine, a NIWRC publication, reads, “A Nation is not conquered until the hearts of its women are on the ground. Then it is finished, no matter how brave its warriors or how strong its weapons.”

The work that Native American advocates, mothers, aunts, daughters, and families are doing to bring attention to the high rates of missing and murdered Native American women and girls assures us that, indeed, the hearts of indigenous women will never fully be on the ground.

Mary Annette Pember is an independent writer and photographer based in Cincinnati, Ohio.  She is a longtime contributor to Indian Country Today Media Network, where her work focuses on Native peoples with an emphasis on issues affecting Native women.