The Return of the Left

Mélenchon’s election campaign has galvanized the Left by doing what Hamon couldn’t — making a clean break with the political center. In France, history is back. Here as elsewhere, the social tectonics of the great economic crisis of 2008 are doing their work. The routine presidential stables are recomposing at great speed. They are realigning political forces around the three options (Three Monsters) nestled within the infra-world of our political modernity. 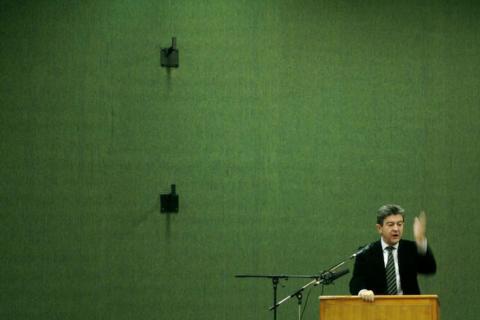 Socialist candidate Benoît Hamon’s campaign is now at an impasse, because he couldn’t see that the neoliberal fox would refuse to accommodate the socialist hen. That is the opposite strategy to the one employed by Jean-Luc Mélenchon, who has taken leadership of the Left.

The elections of the past were long and rather boring. Carried forth by a liberal wind, there was a seamless exchange of office between the self-assured right and the lightweight left — these wholehearted converts to market modernization — in the eternal present of capitalism. Capitalism had been made master of a globalized space and a financialized time. Endemic unemployment, consumerist exultation, and terrorist or criminal horror made up the three dramatic extremes of a little game buzzing along, spiced up only by the candidates’ antics or the scenes made by betrayed friends.

2017 is not of that vintage. Beneath the slow trickle of twists and turns of electoral competition, a political map is taking shape, with clear dividing lines. In France, history is back. Here as elsewhere, the social tectonics of the great economic crisis of 2008 are doing their work. The routine presidential stables are recomposing at great speed. They are realigning political forces around the three options nestled within the infra-world of our political modernity. These are three irreducible colossus, destined to confrontation.

For the first of the three, the watchword is free and unrestrained competition, financial stability, the brotherhood of selfish calculation. It is already hegemonic in most of the sites of power, and it intends to remain so with the help of outrageously favorable media coverage and the frantic mobilization of the latest electoral marketing technologies. Its sense is the self-evidentness of the dominant discourse; its force is its repetition; and its weakness is its failure.

International and financial elites base their legitimacy on an economic prosperity that drops sufficient crumbs to mollify the harshness of a subordinate existence. Alas, with the stagnation that is now taking root, indecent inequalities are becoming more and more unbearable. Weariness develops, rancor builds up, and little by little it starves the extreme center — the political hero of our neoliberal times — of oxygen.

The second of the three is a monster that feeds on the despair and isolation caused by the first. This is the party of order and of small property, the party of resentment and lost class status. This is the camp of neoliberalism’s losers who dream of a stingy revenge on those weaker even than themselves. Nationalist, authoritarian, xenophobic, its popular anchoring becomes stronger with every inch it is conceded when it offers the necessary arrangements to the powerful. Division, oppression, and confinement are stitched into its grey mantle, abhorred by all friends of democracy.

The third is called the Left, the real left. Audacious and strong from the battles it fights, its gaze is far-reaching and embraces both suffering in the immediate and the destiny of the human race. In recent decades restricted to pestering the electorate and falling back on social and environmental struggles, today it is again a candidate for power. From southern Europe to the Anglophone countries it is pushing back — internally, or from the outside — the old social-democratic apparatuses that had passed into enemy hands, as it again picks up the banner of emancipation.

Benoît Hamon’s victory in the Socialist primary and former Socialist prime minister Manuel Valls’s defection [calling for a vote for Emmanuel Macron] have accelerated this wide political recomposition. Certainly, the former prime minister’s disloyalty is extremely discourteous. But fundamentally, Manuel Valls is right to place ideas before process: the Left cannot be reconciled with those who bear the responsibility for the calamitous last five years, who think his sin was a lack of neoliberalism rather than its excess.

As Machiavelli wrote, it is always preferable openly to declare oneself a friend or an enemy. Jean-Luc Mélenchon has taken over the leadership of the Left because he recognized the need for this strategy. Conversely, Benoît Hamon’s campaign is at an impasse precisely because he was unable to see that the neoliberal fox would refuse to accommodate to the socialist hen.

No one can underestimate the importance, in these troubled times, of the arrival in power — in a major country like France — of a left no longer revolving around neoliberalism. That is exactly what is at stake in the possibility of Benoît Hamon rallying to Jean-Luc Mélenchon’s campaign. There are differences between their programs, but they are not insurmountable.

In particular, on the European question, Mélenchon’s articulation of a Plan A and Plan B leaves a great degree of latitude to find the right balance between the attempt to refound Europe and the determination to carry out policies of social and ecological justice. The rapprochement between the two seems inevitable: the only question is whether it will happen before or after the presidential election.

In the extreme center, the alliance of Macron, François Bayrou, and Manuel Valls takes up its place in continuity with François Hollande’s term in office and the European orthodoxy; stronger than ever, the far right is today in battle order. Carried by the ill wind blowing through our times, it has reason to believe it has a chance. In this critical moment, the Left only has one candidacy capable of bringing the future to us: the vote for Mélenchon. If this vote becomes a rallying point, then victory is within reach.