Airlines make much more on premium seats than on seats in coach. Their goal: make coach seating unpleasant enough to keep the enormously lucrative premium seats filled. For this scheme to work, the inequality involved has to be clearly visible. Coach passengers need to know that passengers upfront are luxuriating while they, cramped and hungry, sit and stew. 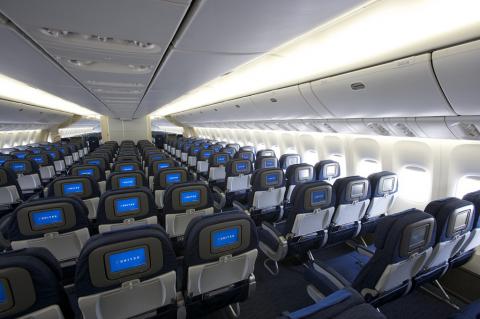 Those of us on the shady side of 60 can remember a time when ordinary people could actually enjoy traveling on an airplane. Meals on all but short-hop flights. Comfortable seats with ample legroom. Plenty of space to stow your bags, since flights seldom took off much more than three-quarters full.

On cross-country trips, flight attendants on United used to hand out menus that proudly proclaimed the meal choices that even coach passengers could make.

We lucky travelers owed that golden age to regulation. Before 1978, airlines operated like electrical utilities. The government determined fares, routes, and schedules and essentially guaranteed the private airlines a reasonable rate of profit in return.

But America’s movers and shakers considered this entire system unreasonable. If we only deregulated the airline industry and let the free market work its magic, they promised, the resulting competition would lower fares and give passengers a much wider array of choices.

Lawmakers — from both parties — would enthusiastically swallow this free-market-magic line, with America’s liberal lion, senator Ted Kennedy, leading the way. In 1978, Congress deregulated the airline industry.

Deregulation at first seemed to bring nothing but good news. Jazzy new “low-fare” airlines jumped into the airline market, and prices sank. But then reality set in. The new airlines came and went, none lasted. A regulated industry essentially became an unregulated monopoly, with corporate executives — instead of public officials — calling the shots.

The shots these execs called would feather their nests at the expense of average travelers. Passengers soon found themselves bouncing at hubs instead of flying direct to their destinations. These hubs cut airline costs but added long hours to travel days.

The cost-cutting continued inside the planes. Airlines eliminated meals for average travelers and the comfy legroom between coach seats. Then they did their best to pack most every seat on every flight, creating ever longer delays in boarding and exiting.

But coach didn’t become truly cruel until earlier this week when United had a 69-year-old doctor dragged off his seat and down the airline aisle. Videos of the incident went viral and generated headlines worldwide.

First-class passengers at United never, of course, have to worry about getting dragged off a flight. America’s airline giants bend over backwards to move deep-pocketed passengers only in the greatest of comfort. United even drives top customers with tight connections from gate to gate in Porsches and Mercedes.

Once aboard United planes, these lucky few can relax in fold-out beds, notes one press report, “complete with mood lighting, adjustable lumbar supports, and bedding from Saks Fifth Avenue.”

And all that anger airline travelers have been feeling this week as they view the doctor-dragging videos? That anger, the DeCelles-Norton research suggests, can best be understood “through the lens of inequality.”

The contemporary airline business model rests on what some analysts like to call the “velvet rope economy.” Airlines make much more on premium seats than on seats in coach. Their goal: make coach seating unpleasant enough to keep the enormously lucrative premium seats filled.

For this scheme to work, the inequality involved has to be clearly visible. Coach passengers need to know that passengers upfront are luxuriating while they, cramped and hungry, sit and stew.

This stark, in-your-face inequality, DeCelles and Norton found in their research, seems to be contributing more to the misery of air travel than no-stretch seats and interminable delays.

An even more startling stat: Having coach passengers walk through first class appears to be “roughly as likely to produce an air rage incident as a six-hour travel delay.”

How to end that inequality? Maybe we could get a little head start by discouraging lavish rewards for corporate execs who see average passengers as little more than sardines to be squeezed.

How lavish? United’s immediate past CEO, Jeff Smisek, had to step down in 2015 after a federal corruption probe implicated him in a favor-trading scheme. He walked away with $37 million in compensation, “including a car, free flights, and lifetime parking privileges at two major airports.”

Airline execs like Smisek all regularly rely on various subsidies that our tax dollars make possible. We could, if we so chose, start leveraging those tax dollars. We could, for instance, deny tax-funded airport subsidies to airlines that pay their top execs over 25 times what they pay their typical workers.

And if that doesn’t work? We can make the execs fly coach.