Locked Up for Being Poor

The county’s lawyer defended this policy by arguing that poor defendants — who are disproportionately black and Latino — stay in jail not because they can’t buy their way out but because they “want” to be there, especially “if it’s a cold week.” Judge Rosenthal called this despicable claim “uncomfortably reminiscent of the historical argument that used to be made that people enjoyed slavery.” 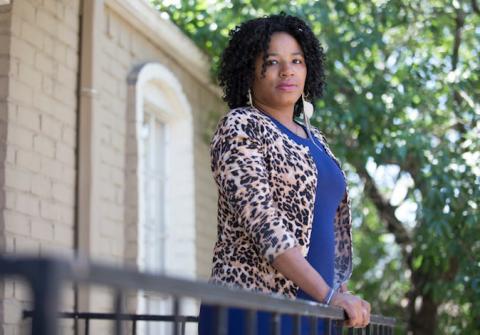 Loetha McGruder, a plaintiff in the lawsuit against Harris County’s bail bond system., Michael Stravato for The New York Times

Maranda Lynn ODonnell, a 22-year-old single mother in Harris County, Tex., was arrested last year for driving without a valid license. The judge set her bail at $2,500. She couldn’t afford anything close to that, so she spent three days in jail — even though she posed no risk of skipping town or endangering anyone if she were released.

“In our society,” the Supreme Court has held, “liberty is the norm, and detention prior to trial or without trial is the carefully limited exception.” Yet across America, poor people like Ms. ODonnell are held in jail for days, weeks or even months solely because they don’t have the cash to bail themselves out. All of them are presumed innocent under the law, and many may in fact be innocent, yet most plead guilty just to get out (usually with a sentence of time served). It’s a repulsive practice, and last week, in a case that could have national implications for bail reform, a Federal District Court judge in Houston ruled that it was also unconstitutional.

In a 193-page ruling that followed a lengthy trial, the judge, Lee Rosenthal, said that money bail should be used for people charged with misdemeanors “only in the narrowest of cases,” and even then only when there are strong safeguards in place to ensure that defendants receive due process before being locked up

Harris County, which includes Houston and has the third-largest jail system in the country, fails on both counts, Judge Rosenthal said. Judges there require defendants to post bail, regardless of ability to pay, likelihood that they won’t return to court or how minor the charges are.

As a result, poor people charged with a misdemeanor end up stuck behind bars, while people with money who are charged with the same offense walk free.

The county’s lawyer defended this policy by arguing that poor defendants — who are disproportionately black and Latino — stay in jail not because they can’t buy their way out but because they “want” to be there, especially “if it’s a cold week.” Judge Rosenthal called this despicable claim “uncomfortably reminiscent of the historical argument that used to be made that people enjoyed slavery.”

The real explanation is straightforward: As cash bail has fueled a politically influential, multibillion-dollar industry, courts are relying on it more, and people who can’t afford it are getting locked up at ever greater rates. Judge Rosenthal noted that only two decades ago, less than one-third of people in Texas jails were awaiting trial; today, it’s three-quarters. Forty percent of all misdemeanor defendants in Texas are locked up until their cases are resolved, at a huge cost to the state, and most because they can’t afford bail.

Every weekday, get thought-provoking commentary from Op-Ed columnists, the Times editorial board and contributing writers from around the world.

The consequences can be devastating. Lives fall apart after even a few days in jail — whether because of job or housing loss or having children taken away — leading to instability that makes it more likely people will turn to crime upon their release. And though the whole point of bail is to ensure that people show up to court, Judge Rosenthal found no clear evidence that secured money bail is any more effective at this — in fact, it could be worse — than methods that don’t depend on the size of someone’s bank account.

The ruling in the Harris County case is temporary, but its broader significance lies in the slew of factual findings Judge Rosenthal made and the legal conclusions she reached. Her careful reasoning could transform the growing debate over bail reform nationwide, where an estimated 450,000 people are held in pretrial detention on a given day.

Some states have made major reforms to their bail systems. New Jersey this year nearly eliminated the use of cash bail, replacing it with a risk-assessment score that considers a person’s flight risk and danger to the community. In Harris County, the momentum for change got a big boost in November, when voters elected a district attorney, Kim Ogg, and a sheriff, Ed Gonzalez, who are both strong proponents of bail reform. (Mr. Gonzalez is a defendant in the lawsuit.)

The cash-bail industry, which includes local bond agents backed by multinational insurance giants, is a morally tainted enterprise that systematically violates the constitutional rights of America’s most vulnerable citizens in the name of profit — and with no discernible benefit to the public. Judge Rosenthal’s thorough, enlightened ruling should be an important step in dismantling it.