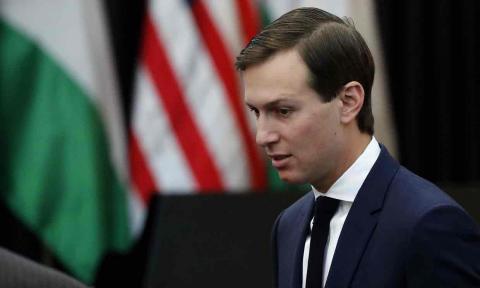 Trump’s son-in-law made the proposal at a meeting in early December at Trump Tower in New York, the Washington Post said. , Thomas Coex/AFP/Getty Images

Jared Kushner and Russia’s ambassador to Washington allegedly discussed setting up a secret communications channel to cloak contacts between Moscow and Donald Trump’s White House transition team, it was reported on Friday.

Ambassador Sergei Kislyak told his superiors in Moscow that he and Kushner discussed ways to shield their pre-inauguration discussions from monitoring, the Washington Post said, citing US officials briefed on intelligence reports.

Trump’s son-in-law made the proposal at a meeting in early December at Trump Tower in New York, weeks before Trump was sworn in, according to intercepts of Russian communications that were reviewed by the US officials, the paper said.

The report will likely put Kushner, who is now a senior White House adviser, under heightened scrutiny in the investigations into the Trump campaign’s ties to Russia. Earlier this week it was reported that the FBI was investigating his contacts with Russian officials.

In a separate development, the Washington Post also reported that the Senate intelligence committee, which is investigating Russian interference in the 2016 presidential race, has asked Trump’s political organization to produce all documents, emails and phone records dating from his campaign’s launch in June 2015.

It would be the first time the Senate’s bipartisan investigation has made such a request to Trump’s official campaign organization.

The White House made no immediate response to requests for comment on either report. Trump is concluding his first foreign trip as president this week. He has repeatedly denied any collusion with Russia.

And Reuters, citing seven current and former US officials, reported that Kushner had at least three contacts with Kislyak during and after the presidential campaign that were previously undisclosed. Those contacts allegedly included two phone calls between April and November 2016.

In response to the Reuters report, Kushner’s attorney, Jamie Gorelick, said Kushner did not remember any calls with Kislyak between April and November. “Mr Kushner participated in thousands of calls in this time period. He has no recollection of the calls as described. We have asked [Reuters] for the dates of such alleged calls so we may look into it and respond, but we have not received such information.”

The cascade of news showed that the multiple Russia inquiries are advancing and that leaks continue to spout from the government, giving administration officials no respite even as they trot the globe.

The White House disclosed Kushner’s meeting with Kislyak in March, four months after it happened, and played down its importance. But the Washington Post reported that the FBI now considers the encounter, plus another meeting Kushner had with a Russian banker, to be of investigative interest.

Kushner, who is married to the president’s daughter, Ivanka, has said he will cooperate with any investigation.

Current and former US intelligence officials were astonished that he would have requested a secret back channel, calling it “naive” or “crazy” given the FBI’s close tabs on Russian officials in the US, the Post reported.

Evan McMullin, an independent candidate in the 2016 presidential race, said the report raised the stakes for Kushner. “If true, this is treasonous activity, whether borne of malice or naïveté, or both,” he tweeted.

Maxine Waters, the Democratic congressional firebrand, expressed little surprise at the latest allegation. “Jared Kushner is under scrutiny in the FBI’s Trump-Russia investigation. In other news, water is wet.”

Rory Carroll is a US west coast correspondent based in Los Angeles. @rorycarroll72