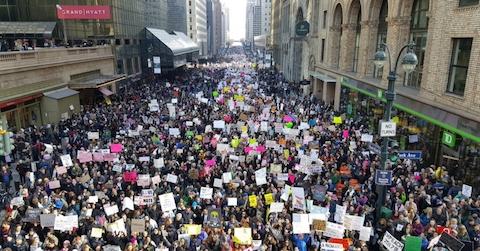 The advent of Trump has unleashed an enormous amount of progressive activity, but a coherent national vision for an alternative remains elusive., AP

As Trump stumbles, and maybe crumbles, progressives are confronting a painful truth: Trump is a reflection of a much bigger problem ― the rise of runaway inequality and the failure of the liberal establishment to address it.

Between 1980 and 2014, the gap between the top 100 CEOs and the average worker climbed from $40 to one to an incredible $844 to one. All boats did not rise. During that time the real income of the average worker (after accounting for inflation) actually declined. Both Republicans and Democrats alike rushed to deregulate Wall Street, which is a major cause of these enormous gaps.

The Democrats, who once spoke for these working people, are in real danger of losing them. Since 2008, they have given up 917 state, local and federal elected offices. There are now 33 Republic governorships.

In workshops around the country, we’ve been asking participants why Trump won. The answers primarily focus on the Comey letter, Hillary as a poor candidate, the Russian hacking, anti-establishment protest, homophobia, racism, xenophobia, and so on..

In no instance is there any self-reflection from progressives about our own role in any of this. Isn’t it possible that maybe, just maybe, the enormous rightward drift has something to do with us ― with how progressives are organized and disorganized? At the very least, we should admit the obvious: all of this happened and continues to happen on our watch. To not take some responsibility for this growing calamity is to concede that we have no agency, no power, and no effective strategy to forge meaningful social change.

The Hazards of Silo Organizing

For the last generation, progressives have organized themselves into issue silos, each with its own agenda. Survival depends on fundraising (largely from private foundations) based on the uniqueness of one’s own silo. Each group must develop its own expertise and activities which distinguish it from other groups. Each needs to proclaim that its issue is the existential threat, be it climate change, police violence, abortion rights or health care. The net result of this Darwinian struggle is a fractured landscape of activity. The creativity, talent and skill are there in abundance, but the coherence and common purpose among groups is not.

Siloed organizational structures also make it extremely difficult to cooperate on a common program to reverse runaway inequality, There is little incentive to form a grand progressive alliance to build what the Sanders campaign, for example, had set in motion. Better to launch your own national effort and claim that it is the center of the organizing universe.

It is therefore not surprising that the two biggest progressive challenges to runaway inequality in the last decade ― Occupy Wall Street and the Sanders campaign ― did not arise from within these siloed organizations. OWS largely grew from a notice in Adbusters, a Vancouver, BC, journal. Most of those who did the occupying at the 900 encampments also did not come from progressive siloed organizations. In fact, the non-profit/NGO community more or less watched from the sidelines.

Similarly, the Sanders campaign also did not emerge from a concerted effort among progressives to create a new politics within the Democratic Party. Rather, it was driven by Bernie’s own social-democratic vision that he had been espousing for over 40 years, year after year after year. When his effort showed signs of life, progressives broadly divided between the idealists feeling the burn and the pragmatists seeking to back a sure winner, who at least would provide access to progressive ideas.

The advent of Trump certainly has unleashed an enormous amount of progressive activity. In addition to the many sizeable marches, there are now approximately 5,000 Indivisible groups making life miserable for Republican office holders. However, nearly all of this activity is anti-Trump and defensive. There is no common Indivisible national agenda, nor is there a common organization to set a coherent strategic direction.

More importantly, pure anti-Trumpism guarantees we will be talking to the already convinced. By focusing solely on Trump, it becomes next to impossible to reach the Trump voters who also voted for Sanders and Obama.

Some argue that such outreach is a waste of time because there really are not that many Obama-to-Sanders-to-Trump voters. Unfortunately, exit polls do not give us enough data to reasonably estimate the size of this hybrid voting population. But sources inside the United Steelworkers, for example, report that 50 percent of their members who voted, voted for Trump. Given how representative those members are of the broader working class, we’re probably looking at several million Obama-Sanders-Trump voters.

Very few, if any of our siloed progressive organizations are targeting these working people. Danger ahead.

It will not be easy for progressive to reach out to Trump voters, unionized or not. In part, that is because anti-Trump defensive activity has become the basis for a new wave of silo organizing and fundraising. Each group is claiming that its activities will be the most effective means for upending the Trump agenda and returning Congress to the Democrats.

The animosity towards Trump voters runs deep. One prominent progressive educator told me privately that Trump voters should be viewed as terrorists ― that their anti-establishment revolt was like throwing a grenade into a crowd, and we’re the collateral damage. Others argue that the Trump voters really are “deplorables” when it comes to their racism, sexism and anti-immigrant beliefs.

The suspicion also spreads to those who do want to reach out to these Obama-Sanders-Trump voters. They are often criticized for favoring class over race ― for failing to put anti-racism as the central feature of all organizing and educational efforts. So for example, if addressing “white skin privilege” is not a major part of the education, then the education is viewed as catering to the racist white working class.

This can cascade into a series of litmus tests on race, gender, immigration, abortion, global warming, etc that must be passed in order to be welcomed into the progressive community. While there is no denying that these issues are of critical importance, the net effect of administering such tests is that progressives will be stuck within their own bubbles.

The Power of Education:

We’re facing a moment of truth about education and social change. We need to decide whether or not we believe that real education about big picture issues can make a difference in how people see the world. This kind of education is not the same as campaign propaganda, sound bite memes or technical training about how to get out the vote or organize an action. It’s about building a broad-based discussion on how the economy works and doesn’t work, and how to make it serve us all. Here are some of its features:

1. Placing a Target on Wall Street: By showing how and why society is growing more unequal, runaway inequality education (see runawayinequality.org) lays bare the ways in which Wall Street and its CEO partners engage in financial strip-mining, ― the immoral siphoning away of wealth from our jobs, communities and families. The weapons of financial engineering are many including mortgage fraud, high interest student loans, stock buybacks, payday loans, too big to fail/jail, bailouts, tax loopholes, tax breaks, off-shore accounts, privatization of public assets, and many, many more. None of our silos are immune from ravages of financial strip-mining

2. Building Common Ground: Big picture education can tie together virtually all the issues that we care deeply about. Runaway inequality and runaway finance are linked to runaway global warming. The forces causing runaway inequality are connected to the rise of the prison population and the expansion of private prisons where we now warehouse millions of our impoverished youth. It’s tied to the attack on union rights, the decline of good paying jobs, the harassment of immigrants and the failure of our corporate-run health care system. This educational process helps us see that our issue silos are in fact deeply connected.

3. Safe space for Dialogue: A strong educational process provides an excellent venue to have dialogue with those that do not immediately share every progressive value or position. I’ve done runaway inequality workshops with Trump voters and the response has been positive. They too want to understand why the richest country in the history of the world cannot provide decent paying jobs and adequate public services for all its people.

4. Developing and Spreading a Common Agenda: Such an educational process also leads naturally to testing and sharing a common agenda to reverse runaway inequality. Such an agenda, in the form of a petition, can serve as an educational tool, and, if it catches on, a way to shift the public debate towards a social-democratic agenda. (See here for national polling results on how young people reacted to such an agenda.)

Learning from the Populists of the late 19th Century

Over a century ago, small farmers, black and white, in the Midwest and South organized a potent mass movement to challenge the power of Wall Street. They called for cooperative enterprises, public banks, public ownership of railroads and telegraph, a progressive income tax and many other limits on corporate power. Their agenda led to many state and nation reforms as well as paving the way for the New Deal and its tight controls on Wall Street.

The key to their organizational successes was education. They fielded 6,000 educators to help build their chapters and spread the word in the 1880s and 1890s. Today we would need about 30,000 to do the same, given the growth of our population.

Building such a network, however, requires having faith in the power of education. It requires that we understand that runaway inequality ties us all together and can only be tackled through a broad-based common movement with a common agenda. This educational process asks us to have the confidence and courage to engage in dialogue with a wide range of people who also care about building a better society for themselves and their families.

None of this will come easy. Our silos provide us with strength. We take pride in our identities and are empowered by them. Also, it is very difficult for us to even imagine what a common movement might look like, let alone how to build one. But we can be sure of one thing: Building a fairer and more just society will require a massive educational movement. As the Populists taught us, it can be done.

(For those willing to take that leap, please join us in building the runawayinequality.org educational network. We need you. We need each other.)

Les Leopold, the director of the Labor Institute in New York is working with unions, worker centers and community organization to build a national economics educational campaign. His latest book, Runaway Inequality: An Activist's Guide to Economic Justice (Oct 2015), is a text for that effort. All proceeds go to support this educational campaign. (Please like the Runaway Inequality page on Facebook.) His previous book is The Looting of America: How Wall Street's Game of Fantasy Finance destroyed our Jobs, Pensions and Prosperity, and What We Can Do About It (Chelsea Green/2009).