Whole Foods and the Failure of “Conscious Capitalism”

Whole Foods CEO John Mackey, the guru of “conscious capitalism,” has long argued the Whole Foods supermarket chain runs on a business model of creativity and innovation that outsmarts the competitive pressures of capitalism’s for-profit system . But, there is no “fix” to the corporate compulsion to produce more, more cheaply, for more profit. It’s written into capitalism’s DNA. And today the chain is floundering and a potential buyout is on the horizon. 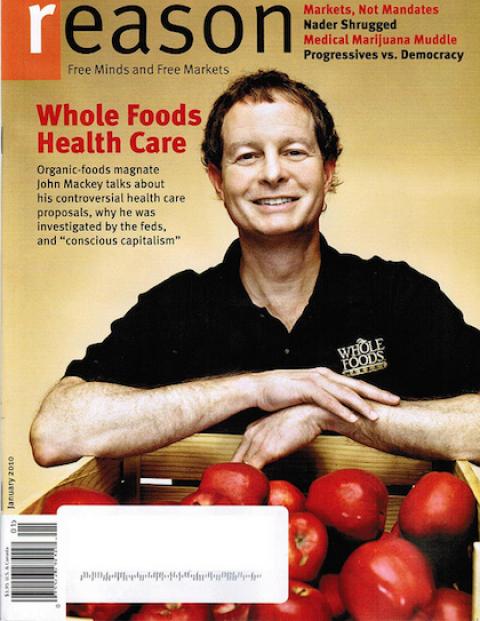 Whole Foods CEO John Mackey, the seer of “conscious capitalism” who denounced Obamacare as “fascist” and compared unions to “herpes,” is having some bad days., Reason Magazine, January 2010/ sdobie

It’s hard to think of a better poster child for “conscious capitalism” than Whole Foods Market, the high-end grocery store that made a name for itself selling organic produce in feel-good, mood-lit stores. These days, the chain is floundering and a potential buyout is on the horizon. What does that say about the conscious capitalism it championed?

Same-store sales have declined for six straight quarters, and Barclay analyst Karen Short estimates that 14 million Whole Foods customers walked away during the same period. Last month activist hedge fund Jana Partners swooped in, buying up 8.3% of the company’s shares and demanding an overhaul. Whole Foods responded by reshuffling its board, bringing in a handful of big box retail stars and promoting Gabrielle Sulzberger, who hails from private equity, to chairwoman.

A failing firm isn’t exactly news. In the dog-eat-dog world of global capitalism lots of companies have their moment in the sun only to crash and burn a few years later.

But Whole Foods was supposed to be different.

John Mackey, the company’s chief executive, has long argued that Whole Foods is wired differently — that it runs on a “conscious capitalism” model that outsmarts the competitive pressures of our for-profit system through creativity and innovation.

In Liberating the Heroic Spirit of Business: Conscious Capitalism, Mackey argues that his conscious capitalism model achieves success by honoring not just shareholders but all stakeholders, including workers, communities and the environment.

The Whole Foods founder penned his treatise in response to the growing consensus that capitalism is doing irreparable harm to the planet and the people who live on it. Our for-profit system is increasingly viewed as a zero-sum game in which ecological destruction, climate change and rising inequality are firmly linked to the rapacious behavior of multinational corporations.

Mackey agrees that humans are harming the planet, but he doesn’t think the problem lies in capitalism. Free-market capitalism, according to Mackey, is actually a “beautiful”, “heroic” system that, properly harnessed, can operate “in harmony with the fundamentals of human nature” and the planet.

We don’t need to rein in corporations through onerous labor and environmental regulations, he writes, because the virtuous feedback loop of honoring stakeholders plus innovation will leave “unconscious” firms such as Walmart in the dust.

The conscious capitalism model is appealing. It’s simple, easy. We can avert looming environmental catastrophe by becoming conscious consumers who frequent conscious companies. After all, shopping at Whole Foods is a heck of a lot more fun than lobbying for regulations on corporations or convincing people to consume less. More Whole Foods, less Walmart. Problem solved.

Mackey was right about one thing: people do love to shop at Whole Foods – or at least, they used to. These days that demon called competition has caught up with the Austin-based company. Behemoths such as Kroger, Safeway, Target and even Walmart now offer a wide-range of organic produce for considerably less than “Whole Paycheck”. Mackey’s conscious company has gone from Wall Street darling to Wall Street basket case in the blink of an eye.

It’s now prioritizing a centralized, bulk-buying strategy that looks a lot like, well, Walmart. It also initiated a $1.25bn share buyback program and has promised to cut costs by $300m and raise same-store sales 2% by 2020.

But according to its 13D filing, Jana Partners – whose founder and fund manager Barry Rosenstein recently bought the most expensive home in the US – wants even more. Like Whole Foods, Jana is experiencing a slump, suffering negative returns in 12 of the past 19 months; it’s expecting to cash in on its investment in the organics chain. A potential forced sale, most likely to private equity investors known for slash-and-burn tactics, remains on the near-term horizon.

The point of this dour appraisal is not to crow over Whole Foods’ misfortune. It’s to take a hard look at models that claim to solve the ills of capitalism without challenging the in-built drives of our for-profit system.

Mackey has loudly declared unions akin to herpes and state regulation little more than “crony capitalism” – that all we need to solve things like the climate crisis are better, smarter, “conscious” capitalists. The crisis of Whole Foods belies this notion. There’s no way to “fix” corporations’ compulsion to produce ever more, ever more cheaply. It’s written into the DNA of global capitalism.

Attractive as the conscious capitalism model may be, we simply can’t rely on companies to deliver dignified workplaces, equitable models of food production or a better relationship between consumers and the planet.

All stakeholders are not equal in our global economy, and even the best intentioned businesses run up against the implacable foes of profit and competition. Ultimately, the thorny problem of sustaining both decent livelihoods and a livable planet won’t be solved by buying better things. It’ll be solved through political struggle and demands that put people before profit.

[Nicole Aschoff is an editor at Jacobin magazine and the author of The New Prophets of Capital.]