Cities, counties and even one state are working to push legislation that would force police agencies to disclose their acquisition and use of surveillance technologies to local lawmakers and communities. 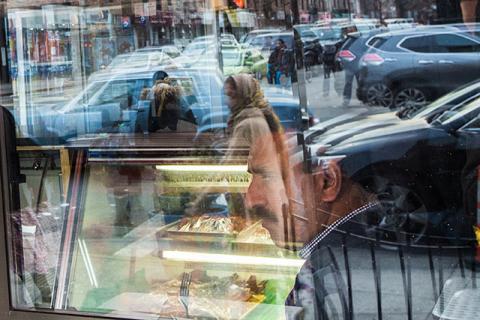 Reflections of pedestrians in a window of a restaurant on Steinway Street in Astoria, Queens, in an area known as Little Morocco that was under surveillance by the New York City Police Department, January 7, 2016. ,Uli Seit/The New York Times

President Trump issued a proclamation on May 15 dedicating last week to law enforcement officers, saying he would make it a "personal priority" to ensure police are "finally treated fairly." Meanwhile, around the country, a different set of priorities is taking shape: Cities, counties and even one state are working to push legislation that would force police agencies to disclose their acquisition and use of surveillance technologies to local lawmakers and communities.

At least 19 cities have introduced ordinances that would force transparency in local police departments' acquisition and use of secretive surveillance technologies, which are disproportionately used to target communities of color. A statewide bill in Maine, sponsored by State Sen. Shenna Bellows, would take similar steps.

The measures being introduced around the country mandate that the acquisition and/or use of local police surveillance tools like "Stingray" cellphone tracking equipment, automated license plate readers, facial recognition technology and closed-circuit television cameras, among other surveillance tools, be explicitly approved by local city councils and subject to a public hearing process that would ensure public input in decisions that directly impact communities' collective privacy and civil rights.

The multi-state effort is part of the Community Control Over Police Surveillance (CCOPS) initiative, launched in partnership with a coalition of human and civil rights organizations, including the American Civil Liberties Union (ACLU), the NAACP, The Leadership Conference on Civil and Human Rights, the National Network for Arab American Communities and the Million Hoodies Movement for Justice, among others.

The 19 cities include Washington, DC; New York City; Seattle; Richmond, Virginia; Milwaukee; Miami Beach and St. Louis, among others. According to Chad Marlow, who is advocacy and policy counsel at the ACLU, another 46 cities are organizing to introduce the transparency legislation; many of them are now working to identify a potential sponsor. The growth of the initiative since its launch last year comes as local organizers, faced with the Trump administration's repressive "law-and-order" agenda, work to find ways to protect vulnerable communities across the US.

Senator Bellows of Maine told Truthout that the bill there is being tabled until next year to allow legislators and stakeholders to work out the details for how a public hearing process will work for state-level law enforcement agencies, as well as to define surveillance technologies in more detail. When the legislation is complete, it could provide a model for other state legislatures to follow.

"A lot of times what happens is people find out after the fact that law enforcement has purchased this new surveillance technology with this unanticipated surveillance capability; and then there's outrage, and ... as legislators we are responding to that outrage rather than getting out in front of it," Bellows told Truthout.

Bellows' sponsorship of the bill was, in part, motivated by concerns over the Trump administration's advocacy for increased surveillance and abuses of power. "In that context, looking at state and local levels, I think putting those safeguards in law now is particularly important, but it matters regardless of who is in power," she said.

According to Marlow, the Trump administration has been a big factor in the spread of CCOPS legislation and ordinances across the nation. "Certainly, when Trump got elected, it really added an additional level onto the work," he said. "Our concern was that they wanted to go after particular groups like Muslims, like immigrants, but ... given the size of these groups and the size of the country, there's no way that the federal government has the resources on its own to accomplish the goal that the Trump administration was laying out. So what that means is that they're going to have to use local law enforcement to help them."

The Trump administration has an enhanced ability to target vulnerable communities, thanks to an Obama-era practice of providing federal grants to localities to buy surveillance technologies on the condition that the locality provide the federal government with access to its surveillance data. However, CCOPS holds the possibility of interrupting that process.

"What we found is that the CCOPS effort, by requiring an approval process not just for acquiring and using the surveillance technologies, but also for sharing their data, is going to move the city council and the public into the process of reviewing and approving or disapproving ... these agreements," Marlow told Truthout.

That includes many sanctuary jurisdictions that have promised not to comply with the Trump administration's mass deportation and immigration policies. Moreover, the legislation could provide an additional layer of protection in red states that have passed anti-sanctuary-city legislation. Under the CCOPS ordinances, even if local police participate in assisting federal immigration enforcement, they may not be able to provide access to surveillance technologies, share that surveillance data, or use the technologies for purposes that haven't been explicitly approved by local lawmakers.

Since the model ordinance does not specifically contain language regarding sanctuary status, it could have a positive impact in protecting targeted communities in a way that doesn't run afoul of anti-sanctuary laws. Still, the local legislation would not have an impact on what state and federal police agencies can do with surveillance technologies, except potentially in Maine, if Senator Bellows' legislation eventually passes.

So far, CCOPS legislation has already passed, or is poised to pass, in several jurisdictions that have outwardly labeled themselves as "sanctuary" localities, and have vowed to resist the Trump administration's immigration agenda. For example, CCOPS ordinances have been adopted in Santa Clara County, California and Seattle, Washington. Neither locality has since received a request to acquire or use sensitive surveillance technologies, perhaps because police agencies anticipate such moves will be politically unpalatable to the public.

In Oakland, California, another sanctuary city, a CCOPS ordinance was unanimously approved by the city's Public Safety Committee, and is slated for a vote by city councilors, with proponents largely expecting its adoption. Brian Hofer is chair of the city's Privacy Advisory Commission. The Commission was established after controversy over the city's effort to build a citywide surveillance hub (formerly known as the Domain Awareness Center) that would have monitored people's activities from cameras and other sensors.

Hofer has been working on the draft ordinance with the city's sanctuary status in mind, and told Truthout that the Privacy Advisory Commission's last few meetings have all touched on ICE. He has examined the city's relationship to ICE, and determined that the city's license-plate-reader data has ended up in ICE's hands via area fusion centers. He told Truthout, "We have a paper trail showing that."

That's where the draft ordinance comes in.

"Big data is here," Hofer said. "These big fusion centers where we give everybody access to all our data, both public and private partners: It's a huge concern. We have a municipal ID card in Oakland.... Secondly, there's a debit card tied to it, so there's the financial transaction paper trail. So there's all these things right now that the Privacy Commission is looking at, how to minimize, to the extent possible, any exposure of Oaklanders to outside [agencies]."

If the ordinance passes, that kind of data sharing would have to be publicly disclosed and approved.

Hofer said the Privacy Advisory Commission used the ACLU's model legislation and modified it to fit Oakland's particular privacy needs. The commission proposed the ordinance in January. On Tuesday, May 9, the city's Public Safety Committee approved it, sending it on to the full council for a vote.

Hofer is working to expand Oakland's proposed ordinance across other jurisdictions in the Bay Area, and told Truthout that the legislation is now in play in Palo Alto, Berkeley and Richmond, as well as for the Bay Area Rapid Transit system.

Because the ordinance would be governing city employees, it requires dialogue with public unions, including Oakland's police union. City attorneys are in the process of conferring with the union about the ordinance's penalties; Hofer expects the union to advocate to eliminate or water down those penalties. After that process concludes, according to Hofer, the council will vote on the ordinance.

"[The union] has always been the elephant in the room," Hofer said. "They've always carried a ton of weight, but recently ... their endorsements have been the kiss of death. Candidates they wanted to run on council lost.... Their power has diminished."

Hofer noted that the union could potentially influence the legislation's accompanying misdemeanor penalty, but he expects most of the penalty components to survive.

"We're definitely in this very aggressive, anti-Trump, self-defense mode out here in Oakland," he said.

But draft CCOPS ordinances haven't been limited to liberal-leaning localities and sanctuary jurisdictions. They are also cropping up in cities in southern states, including Florida and Mississippi, where civil libertarian-minded conservatives have provided some support.

In Pensacola and Miami Beach, Florida, ACLU staffers are meeting with local law enforcement officials to encourage their support for the CCOPS ordinances, according to Sara Latshaw, who is the ACLU's director for North Florida.

"Our ordinance in Pensacola has support from both sides of the aisle," Latshaw told Truthout.

Latshaw explained that while some communities are most concerned about privacy violations, others are more concerned about the disproportionate use of surveillance technologies to target people of color and activists.

"Everyone is at the table for a different reason, which makes it unique and also an opportunity to work with unlikely allies," Latshaw said. "But certainly for some folks, they are concerned about some of the troubling policy objectives that Trump has brought forward."

Candice Bernd is an editor/staff reporter at Truthout. She is a contributor to Truthout's anthology on police violence, Who Do You Serve, Who Do You Protect?, and was recently honored with the Dallas Peace and Justice Center's "Media Peacemaker of the Year" award. Follow her on Twitter: @CandiceBernd.