Mueller Is Following the Money

There is an increasing sense of desperation in the White House, which is related directly to the fact that Mueller is looking into things that start with a dollar sign. 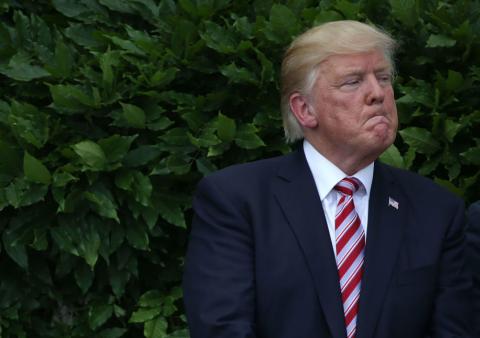 The Washington Post was the first to release the news that Special Counsel Robert Mueller is investigating Donald Trump for obstruction of justice, but the New York Times piece from later on Wednesday evening finishes on a note that’s likely behind the increase in orange ire.

A former senior official said Mr. Mueller’s investigation was looking at money laundering by Trump associates. The suspicion is that any cooperation with Russian officials would most likely have been done in exchange for some kind of financial payoff, and that there would have been an effort to hide the payoffs, most likely by routing them through offshore banking centers.

Looking into not just Trump’s finances, but those of Jared Kushner, Paul Manafort, Michael Flynn and others makes it all but certain that someone is going to find a friendly team of agents at their door. That is, if Trump allows Mueller to complete the investigation.

In fact, if Mueller is looking for money laundering, he really doesn’t need to look all that hard.

Looking into money laundering around Trump is like investigating moisture in the middle of the ocean.

If that’s not enough money laundering by Trump, there’s more.

A Financial Times investigation has found evidence that one Trump venture has multiple ties to an alleged international money laundering network. Title deeds, bank records and correspondence show that a Kazakh family accused of laundering hundreds of millions of stolen dollars bought luxury apartments in a Manhattan tower part-owned by Mr Trump and embarked on major business ventures with one of the tycoon’s partners.

The FBI did wiretap Trump Tower to monitor Russian activity, but it had nothing to do with the 2016 Presidential election, it has been reported.

Between 2011 and 2013 the Bureau had a warrant to spy on a high-level criminal Russian money-laundering ring, which operated in unit 63A of the iconic skyscraper — three floors below Mr Trump's penthouse.

The plaintiffs in a 2015 racketeering case against Bayrock, Sater, and Arif, among others, alleged in the civil lawsuit that: “for most of its existence it [Bayrock] was substantially and covertly mob-owned and operated,” engaging “in a pattern of continuous, related crimes, including mail, wire, and bank fraud; tax evasion; money laundering; conspiracy; bribery; extortion; and embezzlement.” Although the lawsuit does not allege complicity by Trump, it claims that Bayrock exploited its joint ventures with Trump as a conduit for laundering money and evading taxes. The lawsuit cites as a “Concrete example of their crime, Trump SoHo, [which] stands 454 feet tall at Spring and Varick, where it also stands monument to spectacularly corrupt money-laundering and tax evasion.”

Money laundering is what Trump does.

And then there’s son-in-law Jared Kushner. Kushner was already being looked at for his meeting with the head of a sanctioned Russian bank.

Federal and congressional investigators are now examining what exactly Mr. Kushner and the Russian banker, Sergey N. Gorkov, wanted from each other. The banker is a close associate of Mr. Putin, but he has not been known to play a diplomatic role for the Russian leader. That has raised questions about why he was meeting with Mr. Kushner at a crucial moment in the presidential transition, according to current and former officials familiar with the investigations.

Which is part of why Kushner is a big deal in the investigation.

But don’t forget Paul Manafort. Putin’s former political hack has been back in the spotlight because not just because it turns out he had continued involvement with Trump after he left his position as campaign chair, but because of his own mysterious finances, including a tax free loan.

On August 19, 2016, Manafort left the Trump campaign amid media reports about his previous work for a pro-Russian political party in Ukraine, including allegations he received millions of dollars in payments.

That same day, Manafort created a holding company called Summerbreeze LLC. Several weeks later, a document called a UCC filed with the state of New York shows that Summerbreeze took out a $3.5 million loan on Manafort's home in the tiny beach enclave of Bridgehampton.

Manafort not only, somehow, used that loan to get an even larger $9 million loan, but is also being looked at for money laundering.

And, of course, investigators are still looking into Michael Flynn for the money he raked in from Russian state-owned media and even bigger money he pulled down from the Turkish government.

Senior lawmakers on the House Oversight Committee say Michael Flynn, the former national security adviser, appears to have violated the law when he took payments from groups associated with foreign governments. …

As a retired lieutenant general, Flynn was required to obtain permission before receiving foreign payments, Chaffetz and Cummings say. But the classified briefing they received suggested Flynn neither asked permission nor reported the funds he received for a trip to Moscow.

If Mueller looks at the finances of these players and others—not least of all, Donald Trump—there will be enough to keep a stream of indictments and trials moving for months.

Special Counsel Robert Mueller was at the Senate yesterday to meet with Senate Intelligence Committee chair Richard Burr and co-chair Mark Warner. He dropped off a report with them, but whether that report centered on the the obstruction of justice investigation is unclear.

The increasing sense of desperation for the investigation to just be over is coming as Mueller starts to look at things that start with a dollar sign. That’s not a coincidence.

Mark Sumner is on the Daily Kos staff. He is the author of the nonfiction work "The Evolution of Everything" as well as several novels including "Devil's Tower." Follow.