“Would You Like a Drink of Water?” Please Ask a Yemeni Child

This week representatives from more than 100 countries began work on an international treaty to ban nuclear weapons. By boycotting this process the U.S. and other nuclear armed nations showed they have no intention of giving up the power to annihilate planetary life. A world in arms is theft from those who hunger and are not fed, those who are cold and are not clothed; it steals the sweat of its laborers, the genius of its scientists, the hopes of its children.

June 24, 2017 Kathy Kelly Portside
Printer friendly
“Would You Like a Drink of Water?” Please Ask a Yemeni Child Published June 24, 2017 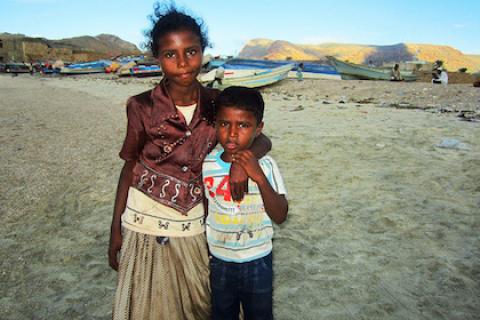 Siblings in the city of Qalansiya, on the Yemeni Island of Socotra.,Gerry & Bonni

This week, in New York City, representatives from more than 100 countries will begin collaborating on an international treaty, first proposed in 2016, to ban nuclear weapons forever. It makes sense for every country in the world to seek a legally binding ban on nuclear weapons. It would make even more sense to immediately deactivate all nuclear weapons. But, by boycotting and disparaging the process now underway, the U.S. and other nuclear armed nations have sent a chilling signal. They have no intention of giving up the power to explode, burn and annihilate planetary life.

“The United States is spending $1 trillion USD over the next thirty years to modernize its nuclear weapon arsenals and triple the killing power of these weapons,” says Ray Acheson, programme director at Women’s International League for Peace and Freedom (WILPF). Acheson also notes that the excessive spending for nuclear weapons contrasts with U.S. cuts to vital anti-poverty programs.

On June 19th, more than a dozen people blocked the U.S. Mission to the UN entrance to protest Washington’s boycott of the negotiations. They were arrested for disorderly conduct, but I believe it’s incomparably  more disorderly to plan for nuclear war.

During the past weekend, to support the negotiations for a treaty banning nuclear weapons, WILPF called for “Women’s March to Ban the Bomb” actions in cities across the U.S. and around the world. Jane Addams, who helped found the League in 1919, was a Chicago woman who understood the crucial need to put an end to war, all war, and instead care for the neediest people. She dedicated herself to assuring that many new immigrants in her city were treated with respect, given assistance to meet basic needs and encouraged to live and work together, peaceably. Addams worked passionately to prevent nations from sleepwalking into the horrors of World War I, and she vigorously campaigned to stop the United States’ entry into it.

Upon return from visiting soldiers who had been maimed while fighting in the trenches of World War I, she spoke of how the young men couldn’t have carried on the war without mind-altering substances -sometimes absinthe, sometimes extra rations of rum. Families were sending laudanum and even heroin to the front lines in hampers. The soldiers couldn’t kill, she concluded, if left in their right minds.

The WILPF gatherings help us ask hard questions about our capacity to prepare for massive obliteration of entire cities, through nuclear weapon buildup, while failing to meet the needs of children, like those in Yemen, whose survival is jeopardized by war and indifference. Can we persist in perfecting our nuclear arsenals, indifferent to millions of children at risk of starving to death or dying because they lack clean water — and because U.S. supported Saudi airstrikes decimate the infrastructure that might have supplied food and water, –can we do so and claim to be in our right minds?

WILPF gathered us in Chicago where we took time to remember a remarkably brave former Chicagoan, Jean Gump, a mother of twelve whose altruism led her to help dismantle an intercontinental ballistic missile. On March 28, 1986, Jean and her companions in the Plowshares movement enacted the biblical call to turn swords into plowshares. Picture it in the words of Lila Sarick’s article, “The Crime of Ms. Jean Gump:”

The early morning sun was beginning to glow red over the horizon as a trio ran through the dew-soaked Missouri field.

Silently, a young, bearded man cut the chain-link fence topped with barbed wire, while his two companions, another man and a woman, hung banners beside the scarlet sign that warned them not to enter.

Beside the warning sign, the pair hung a photo collage of the woman’s 12 children and 2 grandchildren. Alongside it, they hung a pennant that bore the group’s logo: “Swords into plowshares — an act of healing.”

The trio then clambered through the hole in the fence and entered M-10, a Minuteman II missile site at Whiteman Air Force Base, Knob Noster, Missouri.

Wordlessly, the three set to work. Ken Rippetoe, 23, swung a sledgehammer at the railway tracks, designed to launch a nuclear missile with the punch of one million tons of TNT.

Larry Morlan, 26, snipped the wires on the signal arms, which pointed blindly toward the sky.

And Jean Gump uncapped a baby bottle filled with the trio’s blood and poured it in the shape of a cross on the gleaming hatch from which a missile could emerge. Underneath, she painted the words “Disarm and live.”

For this action, Jean Gump was sentenced to 4 ½ years in prison. The following year, her husband, Joe Gump, performed a similar action, believing Jean was right about assuming personal responsibility to deactivate nuclear weapons. The couple galvanized a group of Midwesterners to form a 1988 campaign, the “Missouri Peace Planting,” which involved dozens of people climbing over barbed wire fences onto the grounds of nuclear weapon silos in Missouri, and planting corn on top of  the missile silos. I remember entering a nuclear weapon site in Missouri’s Whiteman Air Force Base, planting corn, and shortly thereafter finding myself kneeling in the grass, handcuffed, as a soldier stood behind me with his weapon pointed toward me. I lasted about two minutes in silence, and then started talking about why we did what we did and how we hoped the action would benefit children that he loved as well. And then I asked him, “Do you think the corn will grow?”

“I don’t know,” he responded, “but I sure hope so.” And then he asked me, “Ma’am, would you like a drink of water?”  I nodded eagerly.  “Ma’am,” said the soldier, “would you please tip your head back.” I did so, and he poured water down my throat. Recalling his kind offer to give me water jolts me into awareness about the relationship between the nuclear weapon below us, that day, and massive numbers of people, then and now, who acutely need clean water.

Imagine if his question, “Would you like a drink of water?” were asked, today, to people living in Yemen. Now, as the U.S. insists on having an exceptional right to dominate the planet, insists on being armed with enough explosive fire power to obliterate entire cities, suppose we were to ask people in Yemen, millions of whom now face cholera and starvation, if they would like a drink of clean, pure water?

Or, let’s bring the question closer to home and ask people in Flint, MI, whose water is contaminated, “Would you like clean, pure water?”

And as we grope for solutions to the signs of climate change, including severe droughts and the rush to privatize dwindling resources of potable water, imagine asking the children of future generations, “Would you like a drink of water?”

President Eisenhower was right to equate possession of nuclear weapons with commission of crime.

Every gun that is made, every warship launched, every rocket fired signifies, in the final sense, a theft from those who hunger and are not fed, those who are cold and are not clothed. This world in arms is not spending money alone.

It is spending the sweat of its laborers, the genius of its scientists, the hopes of its children.

It’s a big “ask”:  get rid of nuclear weapons. Along with planning and joining protests, another way to remain awake and focused on preventing nuclear annihilation involves recognizing how interconnected we are with others, so much so that the suffering and death of another person diminishes our own lives.

This wakefulness entails abiding care for others. Jean Gump and Jane Addams practiced such care throughout most of their lives. We, likewise, can work toward justice for those who live in communities like Flint, MI; we can seek sane approaches to the climate crisis; and we can insist that those who are targets of war, like the cholera-ridden, desperately hungry children of Yemen, be spared from aerial terrorism and given full access to clean, life-saving waters.

[Kathy Kelly co-coordinates Voices for Creative Nonviolence. She is the author of Other Lands Have Dreams published by CounterPunch/AK Press. She can be reached at: Kathy@vcnv.org.]

Many thanks to the author for sending this article to Portside.