Lessons From the Collapse of Banco Popular 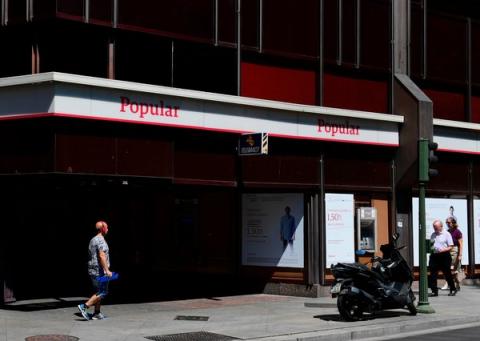 A Banco Popular office in Madrid earlier this month. The bank’s problems can be traced back to the mortgage mania of over a decade ago.,Pierre-Philippe Marcou / Agence France-Presse — Getty Images

Banco Popular, Spain’s fifth-largest bank, with over $100 billion in loans, collapsed earlier this month, forcing it into the arms of its rival, Banco Santander. The latter, Spain’s largest bank, bought the failing institution for the nominal sum of one euro after depositors withdrew money en masse and the company’s stock price plunged.

Rather than panic, though, world financial markets shrugged, and eurozone regulators congratulated themselves for directing a big bank rescue without having to tap taxpayers.

Isn’t it good to know that everything is under control among eurozone banks?

That is the view investors seem to be taking. Whistling past the Banco Popular graveyard, many seem eager to ignore the warnings this failure raises about rising risks in the European banking sector. Regulators on both sides of the Atlantic, too, seem unfazed by the incident as they continue their push to reduce the size of capital cushions that banks must set aside for bad times.

Believe it or not, Banco Popular’s problems can be traced back to the mortgage mania of over a decade ago. Toxic home loans, moldering on its books all these years, were a major cause of its collapse.

But its rescue, European financial regulators say, proved that the mechanisms created after the 2008 crisis work well. After all, no taxpayer money was involved in the takeover; those on the losing end included investors in the bank’s stock and in the $1.4 billion in debt-like instruments Banco Popular issued to provide a capital cushion.

Santander’s shareholders are also taking a hit: Their holdings are diluted by the bank’s decision to raise $7.9 billion in equity to shore up its balance sheet.

But there is much for investors to learn in the Banco Popular meltdown. Lesson No. 1: Don’t trust bank stress-test results.

Financial institutions must have capital on hand in order to absorb losses. And stress tests were designed by regulators to assess how resilient bank balance sheets will be during downturns. On Thursday, the Federal Reserve Board released the results at 34 of the nation’s largest banks. All exceeded their minimum thresholds.

In 2016, Banco Popular conducted a stress test in cooperation with the European Banking Authority. Although we now know how troubled Banco Popular was, that test told a rosier story.

Consider, for example, the institution’s common equity Tier 1 capital, a measure that takes its equity, or ready capital, and divides it by the risk-weighted assets it holds. In the 2016 report, that measure stood at 10.2 percent of assets, which was below the 12.6 percent average among 51 big European banks, but not the worst on the list.

Even in a so-called adverse scenario, the 2016 test said, Banco Popular would have excess capital of 6.6 percent.

This spring, amid a genuinely adverse situation, this supposed capital cushion vanished almost overnight. After top Banco Popular officials said they needed to raise capital in April, the institution began to experience a run. Then, in early June the bank received $4 billion in emergency assistance from the Spanish central bank; it was consumed in two days. The Santander deal quickly followed.

Edward Kane, a professor of finance at Boston College and an expert on financial crisis management, is critical of the European regulators’ actions on Banco Popular. “Far from illustrating how a resolution should proceed, the delays established by the burn-through of Emergency Liquidity Assistance and the dishonest grading of Banco Popular’s last stress test made it possible for a number of savvy unguaranteed creditors to get out,” he said. “A crisis is a battle over loss distribution. All this crisis and liquidity assistance helps some people get out of their losses.”

Lesson No. 2 of the Banco Popular collapse is that regulators should require banks to maintain higher leverage ratios, another measure of capital adequacy. And yet this is a regulatory requirement the Trump administration wants to loosen.

Leverage ratios are computed by dividing a bank’s tangible common equity by its total assets. Currently, large United States bank holding companies must have a leverage ratio of at least 5 percent to avoid restrictions on capital distributions and discretionary bonus payments. European regulators are much more lenient, requiring a ratio of only 3 percent beginning in January 2018.

As of December, 2016, the eight systemically important banks in the United States had an average leverage ratio of 6.28 percent. Their foreign counterparts’ ratio averaged 5.69 percent.

Thomas M. Hoenig, the vice chairman of the Federal Deposit Insurance Corporation, believes these ratios need to be higher. The amount of money lost by banks during the mortgage crisis combined with the federal assistance they received under the Troubled Asset Relief Program equaled nearly 6 percent of their assets, he said. As a result, a 10 percent leverage ratio would be safer.

The Banco Popular failure has only reinforced his view, Mr. Hoenig said in an interview. Looking back at its 2016 stress test, that bank had a leverage ratio of 5.68 percent. Under the stress scenario it was supposed to be 3.99 percent.

Obviously, given the rescue, the bank’s capital was inadequate.

And yet, Mr. Hoenig said, the leverage ratio is under attack.

Banks, of course, prefer a lower leverage ratio requirement. And so does the Treasury Department, according to its new financial regulation principles. The Treasury’s report, issued two weeks ago, contends that the current requirement is too onerous and impedes critical banking functions such as providing working capital to small businesses.

Relaxing bank capital standards will unleash economic growth, so the argument goes. Such a view was raised in hearings convened by the Senate Banking Committee on Thursday.

Left unsaid is that looser capital requirements could also result in greater risk of a taxpayer bailout.

Which leads us to lesson No. 3 from the Banco Popular mess: Don’t reach for yield if you’re not ready for the risk.