We may never know why justice is still segregated from black death. On one side, people say: America is racist, and jurors are like cops — they hate black people. On the other: The police account is indisputable. Black lives do not matter. The deeper answer is that black death matters. It matters to the life of America, by which I mean the blood flow of ideas that give life to Americans’ perceptions of their nation. 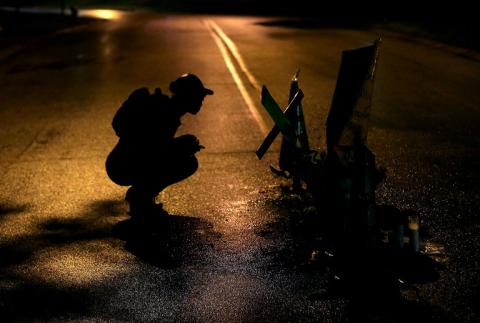 A memorial in Ferguson, Mo., where Michael Brown was killed by the police in 2014., Charlie Riedel/Associated Press

Why are police officers rarely charged for taking black lives, and when they are, why do juries rarely convict?

Many Americans asked this question when a Minnesota jury decided that Philando Castile was responsible for his own death and that the officer who shot him, Jeronimo Yanez, did nothing wrong. Many Americans asked it again a few days later, when the police released the seemingly damning video from the dashboard camera of Officer Yanez’s patrol car.

We may never know why justice is still segregated from black death. Prosecutors, like juries, deliberate behind closed doors. But that has not stopped people trying to find answers. On one side, people say: America is racist, and jurors are like cops — they hate black people. On the other: The police account is indisputable. Black lives do not matter.

The deeper answer is that black death matters. It matters to the life of America, by which I mean the blood flow of ideas that give life to Americans’ perceptions of their nation.

These Americans refuse to see their country as a place where racist politicians and judges maintain laws that form a racist criminal justice system that produces and defends racist cops who disproportionately kill innocent black people. When they are told that black males aged 15 to 34 were nine times more likely than other Americans to be killed by police officers last year, they assume something must be wrong with those young men, since discrimination is over. They cannot help blaming Mr. Castile, even though he calmly told the officer about his registered gun, even though he never pulled it out, even though he had been stopped by officers 49 times in 13 years.

“Post-racial” is a new term with an old pedigree. Ever since Thomas Jefferson wrote “all men are created equal,” Americans have seen their nation as post-racial, as egalitarian.

As a result, Americans defended slavery by characterizing it as a necessary evil or a positive good. As Florida secessionists stated in their unpublished Declaration of Causes in 1861, Americans enslaved black people because “their natural tendency” was toward “idleness, vagrancy and crime.”

A century ago, Americans believed the “Negro problem” had been solved through the separate but equal wings of Jim Crow, so those who violated its laws deserved to be punished. “The greatest existing cause of lynching is the perpetration, especially by black men, of the hideous crime of rape,” President Theodore Roosevelt said in his Annual Message to Congress on Dec. 3, 1906.

Fifty years ago, some Americans blamed the “rioters” who rebelled and were killed by the police in nearly 130 cities for their own deaths.

And over the past few decades, prosecutors and juries ruled that the officers who killed Eleanor Bumpurs and Amadou Diallo and Rekia Boyd and Michael Brown and Eric Garner were innocent.

When black criminality ceased, black death would cease, President Roosevelt suggested. Black people were violent, not the slaveholder, not the lyncher, not the cop. Many Americans are still echoing that argument today.

This blaming of the black victim stands in the way of change that might prevent more victims of violent policing in the future. Could it be that some Americans would rather black people die than their perceptions of America? Is black death more palatable than accepting the racist reality of slaveholding America, of segregating America, of mass-incarcerating America? Is black death the cost of maintaining the myth of a just and meritorious America?

And in exonerating the police officer and America of racism, people end up exonerating themselves. Americans who deeply fear black bodies, who think their fears are sensible, can empathize when cops like Officer Yanez testify that they feared for their lives.

To diagnose police officers’ lethal fears as racist, juries and prosecutors would also have to diagnose their own fears of black bodies as racist. That is a tall task. It may even be easier to get a racist cop convicted of murdering a black person than it is to get a racist American to acknowledge his or her own racism. Racist Americans keep justice as far away from black death as possible to keep the racist label as far away from themselves as possible.

Black people and the post-racial myth cannot both live in the United States of America.

Ibram X. Kendi, a professor of history and international relations at American University, is the author of “Stamped From the Beginning: The Definitive History of Racist Ideas in America.”