The treaty is intended to bar countries from developing, testing, manufacturing, acquiring or even possessing any kind of nuclear weapon. 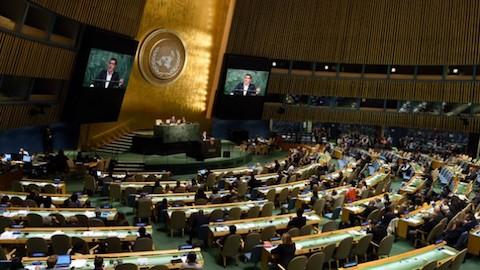 A majority of the world's countries voted at the United Nations on Friday to adopt a global treaty banning nuclear weapons.

The vote marks the first time in history that a majority of countries moved to approve a binding instrument prohibiting nuclear weapons. In all, 122 nations voted in favor of the treaty, while only one, the Netherlands, voted against it. Singapore abstained.

The treaty is intended to bar countries from developing, testing, manufacturing, acquiring or even possessing any kind of nuclear weapon.

Not part of the treaty negotiations, however, were the world's nuclear powers, including the United States, France, the United Kingdom and Russia — all permanent members of the U.N. Security Council — who argued that the treaty was unrealistic and that countries like North Korea would not cooperate.

"There is nothing I want more for my family than a world with no nuclear weapons, but we have to be realistic," U.S. Ambassador to the U.N. Nikki Haley said in March when negotiations on the treaty began. "Is there anyone who thinks that North Korea would ban nuclear weapons?”

The vote, however, was celebrated by arms control groups, who said the treaty was a first real step toward eliminating nuclear arms.

“By delegitimizing nuclear weapons and raising awareness of the terrifying dangers that come from continued reliance on them, the nuclear ban makes a valuable contribution to nonproliferation and disarmament efforts," Meredith Horowski, the global campaign director for the anti-nuclear weapons group Global Zero, said in a statement.

"There are many more steps to come in order to secure a world without nuclear weapons, but today the world took a step in the right direction," she continued.

Daryl Kimball, the executive director of the Washington-based Arms Control Association, applauded the treaty as a way to "delegitimize nuclear weapons and strengthen the legal and political norm against their use."

But the prohibition passed at the U.N. on Friday "should have been stronger," he said.

"In our view, and in the view of many delegations, the final text of the Nuclear Weapons Prohibition Treaty should have been stronger," Kimball said. "Key areas, particularly Article 3, which outlines the requirements for safeguards against nuclear weapons programs, could have been strengthened and improved."