We Need a Medicare for All March on Washington

Both parties aren't addressing our health care needs — now is the time for socialists to lead a national Medicare for All campaign. 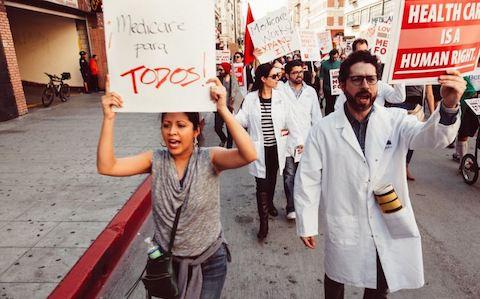 A Medicare for All rally in Los Angeles, CA in February 2017. ,Molly Adams / Flickr

Big demonstrations and marches are too often seen as a silver bullet. In bad histories of the Civil Rights Movement, even, tens of thousands of meetings, organizing drives, and small actions are forgotten, while only mass assemblies on the Washington Mall remain.

Today, marches tend to replace much of the work they are meant to demonstrate, namely organization- and infrastructure-building. Where at one time such demonstrations proved the strength of an insurgent political bloc, nowadays they are seen as an end in themselves.

But with Donald Trump’s health agenda set to kill thousands and immiserate millions more, and with Democratic resistance to it failing, now is precisely the time when we should organize a Medicare for All march on Washington.

We have a fleeting window to make such a demonstration viable. The socialist left is in a period of rapid growth, thanks to the presidential campaign of Bernie Sanders but also due to the downward mobility experienced by many young workers. The economic and social conditions in the country are fueling anger and resentment that’s taken many forms, including the growing popularity of working-class demands for jobs programs and an expanded safety net.

The demand for decent health care is at the forefront of these calls, with polling indicating that some 60 percent favor expanding Medicare to cover every American.

The current popularity of Medicare for All can be attributed to both the success of Bernie Sanders’s advocacy throughout his campaign and the failure of both major political parties to address health-care needs. The Republican health-care plan provides more profits for providers and less coverage for workers and as a result has suffered a major public rebuke. Meanwhile the Democrats are struggling to justify Obamacare’s inability to keep costs low and provisions decent.

Medicare for All is the only demand that meets the needs of most workers and has received a warm reception among voters across the political spectrum. The prospect of free health care at the point of access is more popular than ever. Given the widespread enthusiasm for the demand itself, Medicare for All advocacy should — and likely will — make up the bulk of the organized activity among socialists and progressives across the country in the coming period. And while single-payer has long been a major demand of the Left, socialists have only recently again become visible on a national stage. We’re now presented with a once-in-a-generation opportunity to participate in the fledgling nationwide movement for single-payer health care while organizing and consolidating our ranks.

Despite the recent growth of groups like the Democratic Socialists of America — which has quintupled in size from around five thousand members before the election to around twenty-three thousand today — much of the Left’s activity is ghettoized among a small layer of young people and disconnected from any wider social base. By working on a popular demand, we’ll be better positioned to relate to militant sections of the working class; advocate for an oppositional and positive working-class politics; and have a reason to canvass, organize, and convene those who won’t be won over by dank #fullcommunism memes.

A Medicare for All campaign also reflects a particular strategic importance for socialists regarding our potential allies in the labor movement and the need to connect the young layer of Sanderistas with organized workers on the basis of an oppositional class politics.

Single-payer health care has a preexisting base among one of the most important sectors of the organized working class: nurses and health-care workers. Health-care workers are likely the leading political edge of the labor movement. Their organizations have been among the few sectors of the organized working class that have actually increased their strike rates during a period of decline in labor militancy. National Nurses United was the first national union to endorse Bernie Sanders and stake a clear opposition to the corporate accommodationist politics of the Democratic Party. Further, nurses and health-care workers have access to a built-in base: their patients. Socialists have common cause with these workers but are largely segregated from them; advocating for an explicitly political demand alongside them could be a first step to connecting the socialist left to a broader workers’ movement.

Beyond this, a Medicare for All campaign presents opportunities for an oppositional class politics. Despite the clear advantages of a single-payer health system, the corporate class is dead set against the possibility of enacting such legislation. Their objection isn’t merely a question of profitability — indeed many employers would benefit from having their employee health-care costs offloaded onto the federal government — rather their objection is about class power.

Since the postwar era large employers have used health care as a major bargaining chip over workers. Tying health care to employment creates a dependent workforce, one that is less likely to strike and less likely to leave their jobs. Employers tolerate the high costs of health care because it gives them an alternative leverage on the shop floor. In their eyes Medicare for All also sets a dangerous precedent, challenging their ability to manage their workers and affirming the state’s ability to remove sectors of the economy from the market.

Politically, Medicare for All gives socialists the opportunity to speak to a frustrated electorate. And despite polling which suggests that 70-80 percent of registered Democrats support the demand, party leaders like Nancy Pelosi consistently mock advocates and insist on the futility of single-payer, leaving an opening for socialists and progressives to advocate for a more aggressive approach.

iven the long list of recent do-nothing demonstrations, organizers might be skeptical of another march. Contemporary mass marches are exhausting to organize and tend to function as cathartic endeavors rather than as a catalyst for deeper organizing or as a demonstration of a particular social bloc’s leverage over those in power. This past year’s marches often failed to develop a long-term political strategy and even those that had programmatic points of unity were unable to maintain lasting and durable political alliances.

Still, the mass and semi-spontaneous demonstrations that followed the inauguration were fruitful insofar as they managed to shake the confidence of Trump’s supporters and perhaps the administration itself. Trump’s base has still not been able to defend his reactionary program with mobilizations anywhere near the scale and enthusiasm of the Women’s March or the airport protests. This dynamic has managed to slow down what Trump hoped would be an immediate, aggressive implementation of his policies.

A march of the kind proposed here would strive for the successes of 2017’s early mobilizations while avoiding their weaknesses.

For one, a march for a single achievable demand would be both more attractive and more effective than those built around platforms full of abstract feel-good phrases.

Further, the march itself would be the result of a yearlong campaign of coast-to-coast advocacy and organizing. By working on a single tactical goal, requiring close cooperation on logistics, messaging, speakers, and more, organizers can build a tighter coalition that doesn’t just exist on paper. Those relationships can form the basis of a long-haul national movement emerging out of the march.

Some on the Left will see this as too ambitious, insisting that we need to think small and act locally.

But despite the proven popularity of Medicare for All, advocating for it at the local level has clear limits. California’s Democratic Socialists have done important work advocating for single payer in their state, but most states do not have the that option either because such legislation doesn’t exist or if it does it’s a political dead letter. States are dependent on federal Medicare funding for their own programs, and are especially jumpy about implementing new spending given Trump’s vindictive threat to cut off funding to asylum cities.

Worse, state-level legislative strategies would facilitate the segregation of the Medicare for All movement, wherein each organization fights for legislative gains in their home states largely independent of a nationally coordinated effort. Such lobbying campaigns — especially under the current political conditions — would likely fail to secure gains in most states, fail to generate mass nationwide enthusiasm for the demand, and risk organizational exhaustion by virtue of the sheer power of our opposition. Our enemies — like the insurance lobbyists, the American Medical Association, and other tools of the health-care industry — are better funded and better connected. Fighting them on their terms, siloed from each other by state lines, would make the battle nearly unwinnable.

Our best weapon against these powerful industries is those young people who were drawn to the Bernie Sanders campaign and its promise of a programmatic working-class politics. With the campaign itself in the rearview, political and organizational unity has waned. But by committing to a campaign for a single working-class demand we could reignite those young people and connect them with organized health-care workers, patients’ groups, and the larger movement that’s sprung up in opposition to Trumpcare. We could productively feed off the general frustration with the Trump administration while going on the offensive with a nationwide, positive campaign.

Simply, a march would give socialists the opportunity to vocally and aggressively lead on a major working-class demand. It would help us build organization, forge political consensus, and reintegrate the socialist movement with a key sector of the workers’ movement.

That same level of unity and clarity of focus could not be achieved by lobbying-style tactics like phone-banking senators or through hyper-local campaigns. The achievability and immediacy of a march gives us the opportunity to focus attention on a single nationwide goal and will help us foster solidarity among thousands of socialists and progressive workers. Further, if successful the march could turn Medicare for All into a defining political flashpoint in the coming years.

The socialist left cannot afford to let this moment pass.

Dustin Guastella is a member of the Democratic Socialists of America and a graduate student in sociology at Rutgers University.

Our spring issue, “By Taking Power,” is out now. To celebrate its release, subscriptions start at just $14 by following this link.