The Dark History of Defining ‘Family’

Efforts to define and manipulate the definition of “family” in immigration matters are not new. For more than 100 years the government has done so, often reflecting political exigency and racial bias rather than the real needs and desires of families. 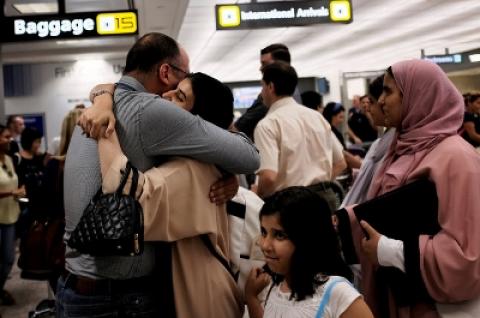 The Trump administration lost another round on Wednesday in its continuing legal battle over its travel ban against people from six majority-Muslim countries and all refugees. The Supreme Court let stand — pending full review of the ban in October — a Federal District Court ruling in Hawaii that included grandparents and other close relatives of those in the United States within the scope of exemptions to the ban.

Last month, the Supreme Court authorized the administration to implement the ban but instructed the government to exempt people with “bona fide” relationships to relatives and institutions (like employers and universities) in the United States. The State Department issued guidelines that narrowly defined those family relations as spouses, parents and parents-in-law, children and siblings. It excluded grandparents, aunts and uncles, nephews and nieces, and brothers- and sisters-in-law. It also excluded all refugees.

These rules struck many as arbitrary and needlessly cruel. The exclusion of grandparents seemed particularly capricious and nonsensical, as did the allowance of a sibling, say, but not that sibling’s spouse. In countries like Syria, where families have been torn asunder by war, a cousin in America may be someone’s only lifeline to safety.

In response, the administration said that it was merely following established immigration law. That’s true to the extent that only certain immediate relations are eligible for family-sponsored visas for permanent residence. But the travel ban goes far beyond the treasured green card. It applies those rules to people who would otherwise be eligible for entry, including refugees who have been cleared and accepted by a resettlement agency, and short-term visitors, such as tourists, businessmen and grandparents coming for a family visit.

It is true, however, that efforts to define and manipulate the definition of “family” in immigration matters are not new. For more than 100 years the government has done so, often reflecting political exigency and racial bias rather than the real needs and desires of families.

Although the United States purports to promote family unification in its immigration policy, it has usually defined “family” as narrowly as possible, limited to the nuclear family of two heterosexual parents and their children. (Only recently have we recognized same-sex spouses.) But the nuclear family is not the normative family unit in much of the world — or for many in the United States, for that matter. In addition, the government has used an arbitrary distinction between citizens and permanent residents to make the rules narrower still. Those definitions have effectively served only one purpose: to constrain the volume of immigration.

Our most family-friendly immigration era was before World War I. At a time when there were hardly any restrictions on European immigration, there were no rules defining who was a family member. Some Europeans came as nuclear household units. Many others sent an adult male first, to scope out work opportunities and communities, and later sent for relatives — a nephew, say, or a cousin. Families determined their migration strategies according to their needs, aspirations and means.

Those flexible practices became constrained, if not impossible, after Congress imposed numerical quotas on immigration in the 1920s. Under pressure from Americans who argued that, as citizens, they had the right to bring relatives from abroad, Congress exempted the wives and children of citizens from immigration quotas. The disqualification of relatives of noncitizens especially hurt those from the countries of Southern and Eastern Europe, which suffered from extremely low quotas. Worse, Chinese-Americans found that the law of racial exclusion overrode their rights as citizens to bring wives and children.

After World War II, Italian-American citizens lobbied to bring their parents and adult siblings to the United States as non-quota immigrants, but without success. Only in 1965, when Congress overhauled the immigration law, were parents of citizens added as non-quota immigrants. The law also established preferences within the quotas for spouses and children of permanent residents and for adult children and adult siblings of citizens. Those expansions aimed to accommodate Europeans, who made up a vast majority of the foreign-born. Some members of Congress cynically believed the system of family preferences would preserve the white racial majority of the population.

In the decades since, restrictionists have called for eliminating some of the family preferences, especially the “brother and sister” category, which is heavily used by immigrants from Mexico, India, the Philippines and China.

What would a more family-friendly immigration policy look like? First, we should loosen the numerical restrictions on immigration to allow for a greater number of relatives to immigrate. Proposals to eliminate various family preferences often assume a zero-sum calculation — adult siblings are deemed dispensable so more visas can go to spouses — but why can’t we increase the overall number of relatives eligible for immigration?

Second, we should expand the definition of family to include grandparents, aunts and uncles and other close relations. In many cultures, extended families provide support for their members by pooling resources, whether income or cross-generational care. They generate close emotional and practical ties beyond the nuclear family unit. “Tio” and “tia” may want to immigrate to pursue a business opportunity, which might in turn provide resources for nieces and nephews and other family members in both the United States and the home country. “Nai-nai” may wish to join her grandchildren in America after becoming widowed. Those are reasonable interests and wishes that we should accommodate.

In the Federal District Court ruling that expanded the scope of exemptions, Judge Derrick Watson stated that the Trump administration’s exclusion of grandparents defied “common sense.” Indeed it did. But such policies have seldom been a matter of common sense. The battle over who is a “close family relation” highlights an uncomfortable truth about American immigration policy: It limits family unification in the service of restrictionist and, at times, discriminatory goals.

Mae Ngai, a professor of history at Columbia University, is the author of “Impossible Subjects: Illegal Aliens and the Making of Modern America.”