Listening to the testimonies of the aging A-bomb survivors (Hibakusha) and nuclear testing victims from the Marshall Islands and Australia, witnessing the emergence of new groups of in-vitro and 2 nd and 3 rd generation Hibakusha who are experiencing high levels of radiation-related health issues, one realizes with horror, that the 1945 atomic bombings are not a thing of the past, but an ongoing, still unfolding event. 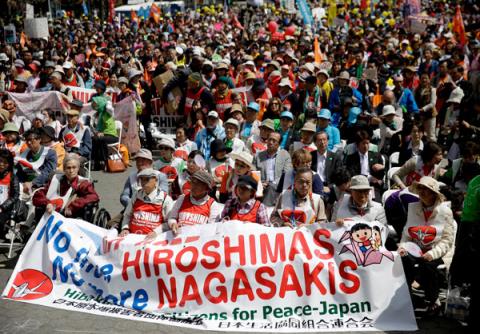 Greetings of peace from Hiroshima, where I’m attending the 2017 World Conference Against Atomic and Hydrogen Bombs, with nearly 100 peace activists from 21 countries and more than 200 Japanese. Today marks the 72 nd anniversary of the U.S. atomic bombing of Hiroshima.

On August 6, 1945, the United States dropped a single atomic bomb – small and crude by today’s standards - on Hiroshima, indiscriminately incinerating tens of thousands of children, women and men in an instant. By the end of that year, 140,000 people were dead. The survivors were condemned to live their lives in fear of radiation-induced cancers, and their children, grandchildren and great-grandchildren continue to face increased risks of health effects caused by genetic damage. Over 90% of the doctors and nurses in Hiroshima were killed or injured by the bomb.

When World War II ended, the nuclear age began. Two Japanese cities were destroyed. More countries obtained nuclear weapons. And in the name of national security, at least eight countries have tested nuclear weapons all over the world, putting millions of people, their children, and future generations at risk.

Today, nearly 15,000 nuclear weapons, most an order of magnitude more powerful that the US atomic bombs that destroyed Hiroshima and Nagasaki, over 90% held by the United States and Russia, continue to pose an intolerable threat to humanity and the biosphere.

The United States is poised to spend more than one trillion dollars over the next 30 years to maintain and modernize its nuclear bombs and warheads, the submarines, missiles and bombers to deliver them, and the infrastructure to sustain the nuclear enterprise indefinitely. All of the nuclear-armed states are engaged in nuclear modernization programs. At the same time, nuclear tensions have risen to levels not seen for decades.

In January, the Bulletin of the Atomic Scientists moved the hands of its “Doomsday Clock” to 2-1/2 minutes to midnight – the closest it’s been since 1953, citing the failure of the international community “to come effectively to grips with humanity’s most pressing existential threats, nuclear weapons and climate change.”

Derek Johnson, executive director of Global Zero, has assessed today’s nuclear threat as “an unprecedented moment in human history. The world has never faced so many nuclear flashpoints simultaneously. From NATO-Russia tensions, to the Korean Peninsula, to South Asia and the South China Sea and Taiwan — all of the nuclear-armed states are tangled up in conflicts and crises that could catastrophically escalate at any moment.”

On December 22, 2016, President-elect Trump tweeted: “The United States must greatly strengthen and expand its nuclear capability until such time as the world comes to its senses regarding nukes”.

There is some good news.

On July 7, I was at the United Nations to witness the adoption, by the majority of the world’s countries, of a historic treaty to prohibit the possession, development, testing, use and threat of use of nuclear weapons. The vote, by 122 to 1, unambiguously demonstrates that most of the world has indeed come to its senses regarding nuclear weapons. But the Doomsday Clock is ticking… When will the United States and the other nuclear-armed states come to their senses?

We stand at a nuclear crossroads, with a sharply divided world. While the Ban Treaty represents the total repudiation of nuclear weapons by most of the states that don’t possess them, the US and the eight other nuclear-armed states boycotted the negotiations. In a joint statement following the vote, the US, France and the United Kingdom declared: “We do not intend to sign, ratify or ever become party to [the Treaty].”

Being here, listening to the testimonies of the aging A-bomb survivors (Hibakusha) and nuclear testing victims from the Marshall Islands and Australia, witnessing the emergence of new groups of in-vitro and 2 nd and 3 rd generation Hibakusha who are experiencing high levels of radiation-related health issues, one realizes with horror, that the 1945 atomic bombings are not a thing of the past, but an ongoing, still unfolding event. We’re only beginning to understand the full implications of those bombings and the magnitude of the crime against humanity that was committed.

Hearing the impassioned pleas of peace activists energized by the ban treaty – from Japan, the Philippines, Nepal, Vietnam, and South Korea, Lebanon, Jordan and Algeria, the UK, France and India, one realizes that the urgent call for nuclear disarmament is a global appeal for survival.

No more Hiroshimas! No More Nagasakis! No More Hibakusha! No More War!

Help us continue to do this critical work and more-- make a donation to UFPJ today.