Resistance at Tule Lake: A Hidden History of Japanese American Incarceration and Defiance 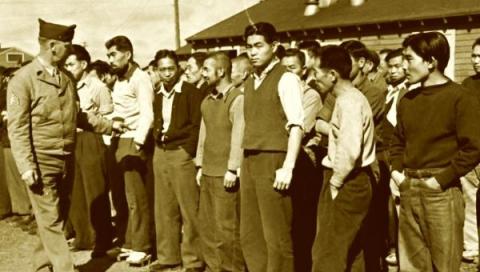 “Tule Lake was the crucible where the Japanese Americans who were willing to protest and refuse to cooperate with the U.S. mass incarceration regime were segregated into one militarized, overcrowded camp,” Aderer explained.,Tule Lake Committee

Just over 75 years ago, U.S. President Franklin Roosevelt signed Executive Order 9066, a move that codified racist bigotry and led to the roundup and illegal incarceration of 120,000 U.S. residents. The White House decree entailed the forced removal of the Japanese American community from their homes, schools, and places of work, indefinitely suspending their civil liberties and constitutional rights while confining them to concentration camps on the basis of long-simmering racism and unjustified wartime paranoia.

Filmmaker Konrad Aderer's grandparents were among those incarcerated in the camps. In his latest documentary, “Resistance at Tule Lake,” viewers are presented with a long-stifled aspect of the tragedy of Japanese American detention, with the organized mass resistance bravely waged by the 12,000 residents branded as “disloyal” to the U.S. government taking center stage. Detained under color of law at the Tule Lake Segregation Center along California's northern border, the protagonists of “Resistance” defy attempts to marginalize their suffering or their defiance.

The documentary, which is being screened at select venues, gives audiences a rarely-heard opportunity to listen the voices of those who were unexpectedly plunged into “a hell,” as one survivor recounts, but maintained the strength not only to survive, but also to fight back.

“The resistance that arose in the incarcerated Japanese American community is a story that has been largely hidden until now,” Aderer told teleSUR. “And it holds so much more much more meaning now, can be better understood in this post-post-9/11 era when, absent any new major attack in the United States, Islamophobia and anti-immigrant hatred has managed to become even more vicious and influential."

Drawing on interviews with survivors and historians as well as newsreel footage and on-location shots, the film is at once mournful and galvanizing. Elderly survivors, often revealing a wry sense of humor, recount their bitterness over the experience, while also shedding light on their struggle to retain their dignity and humanity in the face of mass confinement.

Delving into the racist mood enshrouding the period prior to the war, “Resistance” details how politicians were elected to office on the basis of immigrant scapegoating and open white supremacy. Calling for the stripping of citizenship from Japanese Americans, candidates emblazoned slogans such as “Keep California White” on campaign posters – an early iteration, perhaps, of the ubiquitous Trump slogan, “Make America Great Again.”

“It was the endgame of the Japanese 'problem' on the West Coast that was invented well before the attack on Pearl Harbor, where white farmers facing competition from Japanese Americans and other racists saw their agenda of detention and deportation fulfilled,” Aderer explained.

Absurd “loyalty tests” were administered across the U.S. concentration camp system, gauging prisoners' patriotic devotion to the U.S. government in a primitive form of Trump-style “extreme vetting.” Designed to ferret out the “good Japanese” from the “bad,” detainees were asked if they were willing to join the Armed Forces and fight in the Pacific theater or “swear unqualified allegiance” to the U.S. government while disavowing allegiance to Japan and its emperor.

“The 'loyalty' questionnaire was a real tragedy,” survivor Tokio Yamane remarked in the film. “If they had given it before forcing us all into camps, probably all Japanese Americans would have declared loyalty to the U.S. government. I said I won't answer, I saw no reason for it.” Rightfully, they sensed a form of racist persecution from which Italian and German Americans were exempt – a case of “white against yellow,” as one survivor describes.

While most answered “yes-yes” to the questions in an attempt to mitigate their own suffering, 12,000 dissidents simply refused to fill out the insulting tests and were dubbed “disloyals,” or “no-nos.” Those deemed disloyal were shipped off to the Tule Lake Segregation Camp.

“Tule Lake was the crucible where the Japanese Americans who were willing to protest and refuse to cooperate with the U.S. mass incarceration regime were segregated into one militarized, overcrowded camp,” Aderer said. “For this, they this, they were re-incarcerated at Tule Lake Segregation Center, further abused, tortured and policed with a battalion of the U.S. Army, intimidated and at one point fired upon by tanks,” Aderer explains.

The problem with the Tule Lake compound, however, was that by making the facility a dumping grounds for those deemed “disloyal,” the U.S. War Relocation Authority made the camp a “pressure cooker” of the most dissatisfied, indignant, and often, the most organizationally savvy among detainees.

Prison blocks formed negotiating committees to demand improved treatment, better rations and sanitary medical facilities. Disturbances were frequent: in one case, a deadly accident at the farm led to 800 prison farm workers laborers putting down their tools to strike against unsafe conditions at the camp. Faced with such defiance, camp authorities dug in their heels, resulting in continued ferment by prisoners who held mass meetings that frightened authorities.

When a mass uprising resulted in prisoners attacking an official known for his open racist contempt toward incarcerees, U.S. Army troops and tanks were mobilized to impose a state of “martial law” within the concentration camp.

Soon, Tule Lake's tiny stockade, Area 99 – referred to in the film as the “Guantanamo Bay of Japanese American incarceration” – housed the entire elected leadership of Tule Lake. Within the cramped former barracks, “troublemakers” were shackled, beaten to a pulp and subject to torture under orders from military top brass. Before long, hundreds of prisoners filled the stockade, where desperate hunger strikes were waged to demand unconditional release.

Many wore the “disloyal” tag with a sense of pride, clashing with fellow prisoners who acted as informants in an attempt to prove their loyalty. Disillusioned and demoralized by their experience in the United States and far removed from Japan, a faction of Japanese immigrants organized a nationalist league within the camp. Called the Hoshi Dan, the group shaved their heads and marched across the camp sporting uniforms emblazoned with the slogan, “Serve the Nation.” The group was eventually criminalized and jailed.

Thousands of immigrant and Japanese-descendant incarcerees were eventually coerced into renouncing their citizenship. Branded as “enemy aliens” dangerous to public safety, the group faced mass deportation to a war-torn Japan. Pleas to the authorities for leniency and a return to the United States largely fell on deaf ears.

Tule Lake was finally closed in March 1946. For years, survivors bore the stigma of disloyalty even within the Japanese American community, which struggled to reestablish its “loyalty” to the U.S. government in the face of lingering suspicion.

“During World War II and for many years after, the 'no-nos' segregated at Tule Lake were ostracized within their own community,” Aderer said. “There are calls for the Japanese American Citizens League to apologize to the Tule Lake resisters, because during the war the JACL disavowed what they were doing, and in various ways betrayed them in order to present a face of 'loyalty' to the incarceration regime. This film is bound to be part of that discussion, at this crucial time when the United States is in this political crisis of Trumpism and the last generation of Japanese American incarcerees is about to pass away.”

In recognition of the collective mass trauma inflicted on Japanese American communities by the U.S. Government, interfaith ceremonies and pilgrimages continue to take place at Tule Lake concentration camp, which has since been designated a national monument. The film often switches from black and white photos and newsreels to color footage depicting Japanese Americans touring the camp to learn about their families' ordeals.

“Resistance” serves as a timely reminder of the perils of racist hysteria and White House-decreed scapegoating in the Homeland Security State era. Muslim Americans continue to face baseless suspicion and incessant demands of “loyalty demonstrations,” even from voices within the community, while undocumented migrants face incarceration, deportation and removal operations by ICE at a breakneck pace. In a continuation of the timeless pattern of inhumane oppression followed by determined resistance, migrant detainees still frequently launch their own desperate protests against “internment.”

"Decades after World War II, in 1988, an organized Redress Movement within the Japanese American community brought about an apology and reparations for the mass incarceration," Aderer explained. "I guess the positive lesson of the film would be to inspire the communities now being targeted and their allies to hasten the process of compelling our government to live up to that apology and shed itself of the current infection of extremist hate."

“For Japanese Americans, it's a time to show solidarity with the groups now being persecuted, and also to deepen our understanding of what we've been through,” he continued. “The injustice of the U.S. concentration camps wasn't just that 120,000 citizens and non-citizens were all rounded up because of their national origin.”

“Today we have hundreds of thousands of non-citizens a year deported, with over thirty thousand in detention on any given day, by law,” he stresses. “These are today's instruments of the same hate-driven, highly racialized ends.”

Note: While facilities like Tule Lake and Manzanar are commonly known as “internment camps” and were referred to at the time as “assembly centers” and “relocation centers,” the Japanese American community – through representative bodies like the Japanese American Citizens League – refers to the mass confinement facilities as "American concentration camps," "incarceration camps," and "illegal detention centers."