“We have been vastly outspent by industry and their corporate allies. It is clear to us that we are trying to advance rights via the ballot in an election system set up to favor corporations. This time, we’re addressing the election system too.” Lynn Anderson The initiative states that the people of Youngstown recognize that “corporations use their disproportionate wealth to frame important issues and influence elections.” 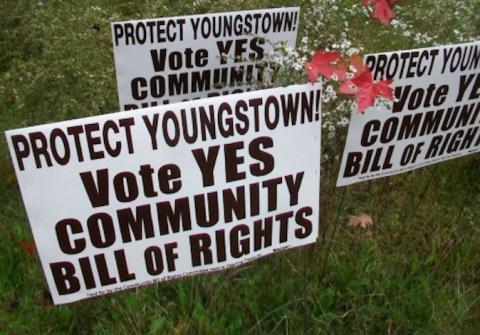 After several attempts to ban fracking in Youngstown, Ohio, the community rights movement is focusing on ending outside industry contributions to local election campaigns., protectyoungstown.org

In their seventh attempt to put an end to the environmental threats the oil and gas industry pose to their land, water and right to self-governance, a community rights group in Youngstown, Ohio, is attempting to amend their city’s charter in order to ban corporate interference in their local elections.

With assistance from the Community Environmental Legal Defense Fund (CELDF)—a non-profit, public interest law firm that provides legal services to communities facing outside threats to their local environment, local agriculture, local economy and quality of life—the Youngstown Community Bill of Rights Committee has gathered and submitted the signatures required to get the initiative, explained below, on their November ballot.

Today, a long-standing community rights group in Youngstown, Ohio, submitted over 1,900 signatures to qualify their Youngstown Fair Election Bill of Rights initiative for the November ballot. The measure is the first of its kind in the state, limiting campaign contributions to registered voters within the City, and capping those contributions at $100.

The Youngstown Community Bill of Rights Committee drafted the initiative with the support of the Community Environmental Legal Defense Fund (CELDF). CELDF has been assisting Youngstown residents to advance their democratic and environmental rights since 2013, when residents launched their community rights work to protect themselves from fracking activities. Fracking threatens their drinking water and has caused earthquakes in the area.

“We have fought to keep fracking projects out of our City for several years, with six ballot measures that asserted our right to clean water and to local community self-government,” says Lynn Anderson, a lead organizer with the Youngstown Committee. “We have been vastly outspent by industry and their corporate allies. It is clear to us that we are trying to advance rights via the ballot in an election system set up to favor corporations. This time, we’re addressing the election system too.”

The initiative states that the people of Youngstown recognize that “corporations use their disproportionate wealth to frame important issues and influence elections.” Therefore, the measure removes corporations from the election process. It also places candidate selection in the hands of voters rather than powerful political parties. It reinforces the separation of powers between the judiciary and other branches of government by removing the initiative’s content as grounds for blocking it from the ballot. Thus, if technical requirements are met, initiatives must be placed before voters.

Tish O’Dell, the Ohio communityorganizer for CELDF, says, “The right to community self-government is an inalienable right—one that the American Revolutionaries fought and died to uphold. The right to vote is supposed to reflect our right to self-government. In Youngstown, that right is rendered meaningless when the people in the community are outspent in their issue campaigns 50:1 by corporate entities. Residents are ready to level the playing field and bring inalienable rights back to the real people who live here.”

PETITION FOR SUBMISSION OF PROPOSED AMENDMENT TO CHARTER

NOTICE: Whoever knowingly signs this petition more than once, signs a name other than his own, or signs when not a legal voter, is liable to prosecution.

To the Council, the Legislative authority of the City of Youngstown, Ohio:

Whereas, we the people of Youngstown recognize that the continued extraction of fossil fuels uses increasing amounts of fresh water for the extraction process, and creates wastewater that can never be returned safely to the water cycle; and

Whereas, we the people of Youngstown, recognize that both humans and the natural communities and ecosystems in Youngstown require clean water, air, and soil to thrive and flourish;

Whereas, we the people of Youngstown, through this amendment, seek to alter our form of government to restore a system of local government capable of securing our fundamental rights and deriving its just powers from the consent of the people, as required by the foundational principles expressed in the Declaration of Independence

Therefore, we, the people of Youngstown, adopt this charter amendment recognizing and protecting community rights to safe drinking water and a healthy environment:

(a) Right to Clean Water, Air, and Soil. All people of the city of Youngstown, along with ecosystems and natural communities within the city, possess the right to clean water, air, and soil, and to be free from activities that would violate this right and expose citizens to the harmful effects of contaminants in their water supply, including, but not limited to, the drilling of new wells or extraction of oil and gas using any technology not previously used on an existing well after the date of enactment of this amendment for oil and gas exploration and extraction operations, the disposal of drilling waste from oil and gas extraction operations, or the depositing, storage, treatment, injection, disposal, transport, or processing of wastewater, produced water, “frack” water, brine, drill cuttings, and muds or other substances that have been used in, or result from, the extraction of oil and gas.

(c) Right to Enforcement Against Corporate Rights. Any corporation, or other business entity, that violates the rights in this Amendment shall not be deemed a “person” to the extent that such treatment would interfere with the rights enumerated by this Amendment, nor shall it possess any other legal rights, powers, privileges, immunities, or duties that would interfere with the rights, including the power to assert state, federal or international preemptive laws in an attempt to overturn this Amendment, or the power to assert that the people of the City of Youngstown lack the authority to adopt this Amendment.

(e) Right of Local Community Self-Government. The people of the City of Youngstown possess the right of local community self-government, as expressed in the Declaration of Independence, the United States Constitution's preamble and Ninth Amendment, and the Ohio Constitution's Bill of Rights, sections 1, 2, and 20. The people's right of local community self-government includes but is not limited to their power to compel their governments to protect their rights, health, and safety.

(f) Severability. The provisions of this law are severable. If any court decides that any section, clause, sentence, part, or provision of this law is illegal, invalid, or unconstitutional, such decision shall not affect, impair, or invalidate any of the remaining sections, clauses, sentences, parts, or provisions of the law. This law would have been enacted without the invalid sections.

The City of Youngstown has 10 days to hold the petitions and then must advance them to the Mahoning County Board of Elections to certify the 1,900 signatures.