It's time to stop relying on markets and multiculturalism, and start engaging in real activism. 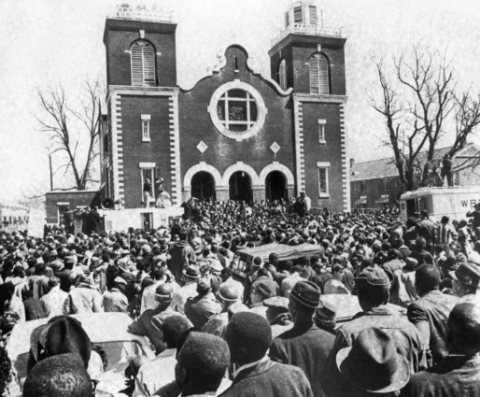 The white nationalist riot in Charlottesville, a city that boasts “diversity makes us stronger,” made a lot of things clear. One of them is that generic solutions to the racial problem — bland affirmations of inclusiveness, tolerance and “free speech” — will no longer work. Indeed, they have never worked, at least not on their own. The problem of discrimination and equality in America has been far more dynamic, operating like an oversized historical game of paper-rock-scissors. And in such a game, throwing the same thing over and over again is never a good idea.

For a long while, we’ve been throwing a lot of “paper.” Liberalism — our paper — preserves our country’s long commitment to contracts. Under liberalism, citizens stand in contract with their government. The government’s job, in turn, has been to enforce contracts between individuals and groups. Truly, when people ask for rights, be they women’s rights, gay and transgender rights, or rights as people of color, they are asking for contract rights. Capitalism, for better and often for worse, is that baked-in to our political system.

Markets didn’t give citizenship its only meaning, to be sure. But the meaning of citizenship in America has remained most real in the commercial possibilities and legal certainties offered by contract. Our “paper” citizenship, thus, inheres in things like the defensible access to employment, ownership and even, at times, the right to kill as a soldier, police officer or property owner. Liberalism’s loftiest promise, in brief, has been the right to own and not be property.

This weekend’s white power march in Charlottesville, and the march’s attendant terrorist attack, reminded the country of the persistence of white supremacy, our country’s “scissors.” Right at the country’s founding, racists cut black and indigenous people out of liberalism’s contract. Black bodies and Native American land did not deserve the protection of contract. They deserved bondage and expropriation.

The 19th- and 20th-century world was ablur with the furious cutting of scissors. And those who sought to keep black or indigenous people from voting, owning, working or traveling were often the very same people doing the very same thing to white women or gay or transgender people or the disabled.

Resistance, be it forceful or clandestine, threatened or explicit, stands as our “rock.” Rocks can look like armed self-defense or nonviolent direct-action campaigns. They appear, too, as blunt, bald public speech about the hatred arrayed against the dispossessed. Our rock against racism has also included the sacrifice of people like Medgar Evers, a black World War II veteran and civil rights organizer, dying in Jackson, Miss., in 1963; or Viola Liuzzo, a white Northern Unitarian Universalist, dying for the same cause in Selma, Ala., two years later.

It has certainly included the countless thousands who lost their lives speaking out and challenging white supremacy everywhere, people whose names we, as a country, will mostly never know. Add to their number Heather Heyer, the white woman killed in Saturday’s attack in Virginia.

No matter its form, rock breaks scissors. A half-century ago, nothing less than radical anti-racism could reduce white supremacy to an outlaw religion. Paper could not do that. The contract logic of liberalism, on its own, was not built for that. On matters of racism and discrimination, capitalism can never serve as the great social fix, because in many instances, the very sectors of the economy that have historically been the most profitable in American history — for instance, slavery, real estate — have also been the most discriminatory.

Lynching remained a form of public recreation well into the boom years of the Roaring Twenties. Until the 1940s, most police departments in America’s fastest-growing cities, even in the North, welcomed open members of the Ku Klux Klan. Through the economic miracle of America’s post-World War II years, Congress remained dominated by Southern segregationists, with Jim Crow housing driving credit and consumer markets for the entire economy.

Then, in April 1968, amid a flurry of other “rocks,” riots shook American cities following the assassination of Martin Luther King Jr. It took that rolling unrest, not the promise of further economic growth, to spur President Lyndon Johnson and Congress to action. Within a week they had passed the Fair Housing Act.

Over the past century, liberalism, vexed by an ever-sharp, ever-cutting white supremacy, has needed these rocks. We owe our country’s very existence as an enduring political experiment to the work and sacrifice we now call the civil rights movement or the black freedom struggle, and not just for the freedom it secured for people of color. In considering the origins of movements for gay rights, women’s rights or disabled rights, we must acknowledge that it was challenges against white supremacy that first shook the grip of those people holding fast to their scissors, that first chastened those insistent on shearing other people from their rights.

Nearly a century of black protest, culminating in Reconstruction, gave us our first national definition of birthright citizenship. The Civil Rights Act of 1964, as the answer to Jim Crow, served as the bedrock of employment and public accommodation protections across America. Similarly, it was political blackness — blackness in public, and broad public affirmation of the value of black life — that, by the early 1970s, finally drove the Grand Dragons and segregationist politicians from their pedestals and high seats in temples of American institutional life. Some, like South Carolina Sen. Strom Thurmond or West Virginia Sen. Robert Byrd, had to shed their robes in order to keep their seats well into the 2000s.

On the whole, America’s corporations, universities, state legislatures, city halls and Congress were forced to rule overt racism — and with it, other forms of discrimination — out of bounds. Or at least they had to try.

Yet despite the rights hard won by rock, we returned to paper. During the 1970s, we covered and concealed any historically specific grievance with a general promise of “equal opportunity,” ownership, and with law and order. Under liberalism, property rights were still king. Outcry about ongoing exclusion in employment, education, and political and cultural representation were not met with redistributive programs but rather diffuse commitments to multiculturalism. We were not allowed mandatory fair employment law, but rather voluntary affirmative action. We were not allowed historically redressive policy — dare one say reparations? — but rather mere tolerance and the assertion that our greatest problem, after nearly a century of Jim Crow, was ensuring the protection of free speech, even for hate speech.

Back in May and now again in mid-August, white supremacists in Charlottesville exhibited a taste for torches. The historical theater of such displays ought not be lost on us. Lynch mobs carried torches. But they also had to carry them, because dedicated people, forcefully defending black rights, drove hatemongers to conduct their murderous work under cover of darkness.

Consider that the Klan and neo-Nazis are again out and about in daylight, wielding not so much torches as scissors. We can keep on throwing paper. Even after a couple of centuries of trying, we can keep hoping a commitment to commerce can still be the great fix. We would do well, however, to wise up and start throwing rock — public denunciations of white supremacy, clear anti-racist institution building, and fighting for policies that undo the money made off racism, especially with an ancient hatred now standing unhooded.

Segregationists have again assumed their pedestals in the Justice Department, the White House and many other American temples. Paper alone won’t drive them out. Start throwing rocks.