Recent lawsuits claim the agency is targeting people for deportation based on spurious allegations of gang connections. 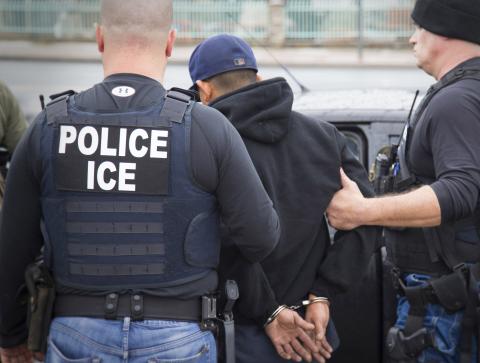 In 2011, then 19-year-old Luis Vicente Pedrote-Salinas was leaving a relative’s house and getting into his car when he was stopped by Chicago police. Officers found an unopened can of beer in the cupholder and booked him for underage drinking. He spent a night in jail, and the charges were dropped.

But that wasn’t the end of it: The police who arrested Pedrote-Salinas were out on a “gang suppression mission” that night and added his name to their citywide database of suspected gang members. Officers said he admitted to being a member of the Latin Kings; he claims they lied and that he’s never been a member of any gang.

According to a federal lawsuit filed in July, Pedrote-Salinas was arrested later in 2011 during an immigration raid targeting gangs and was detained for roughly six months. When he was released on bond, he applied for Deferred Action for Childhood Arrivals (DACA) status and, after being robbed at gunpoint while working at a Subway, a U visa for crime victims, in order to remain in the U.S. He was denied both despite having no criminal convictions. Now Pedrote-Salinas faces deportation to Mexico, which he left when he was five years old.

Immigrants’ advocates and attorneys say that more cases like Pedrote-Salinas’ are likely to emerge under the Trump administration, which has vowed to aggressively track down immigrants in gangs. Local police departments have long shared their gang intelligence with federal immigration authorities. But the feds may be using that information more now as Immigration and Customs Enforcement arrests have increased nearly 40 percent from last year. Critics of gang databases say that because of the loose criteria used to identify potential members, people with no gang affiliation are likely to be swept up in raids meant for serious criminals. Several recent lawsuits have been filed by immigrants who say they were wrongly identified as gang members and detained by ICE as a result.

ICE says police cooperation is key to identifying gang members in the immigrant community. “Law enforcement partners provide actionable intelligence which is critical in the targeting of gangs and their membership for enforcement actions,” ICE spokeswoman Danielle Bennett wrote in an email. A spokesperson for the Chicago Police Department said they could not comment on ongoing litigation.

Police departments use gang databases to keep track of criminal activity in their city and help with homicide investigations. But advocates criticize the lists for casting too wide a net and say they’re a form of racial profiling. Individuals can be added to gang databases for wearing certain colors, hanging out in places frequented by gang members, or knowing or being related to someone in a gang. The databases are also relatively opaque: Individuals are rarely notified when they are added or given a way to fight the designation.

While U.S. citizens can suffer significant consequences once they’re listed in a gang database, for immigrants, it can be far worse. A gang allegation can make someone a higher priority for deportation and the target of a raid. It can be the reason they are denied various pathways to remain in the U.S., like DACA or a U visa. It can also keep them from getting bond, so they must remain in detention while their immigration case is decided, which can take years given the current backlog. Once those allegations are made in court, attorneys say it’s difficult to prove a negative. Lawyers can also rarely prove that their clients were once in a gang but have since left.

ICE proclaimed in May that the agency’s largest gang enforcement effort yet had led to the arrest of 1,095 “confirmed” gang members and affiliates. “Individuals are confirmed as gang members if they admit membership in a gang;...or if they meet certain other criteria such as having tattoos identifying a specific gang or being identified as a gang member by a reliable source,” the agency said in a press release. A similar series of raids this July, which focused on alleged teenage gang members, netted 650 people. Only 130 of them had criminal convictions.

One of the men picked up in those raids was Wilmer Catalan-Ramirez, who was arrested by ICE agents at his home in Southwest Chicago this March. Catalan-Ramirez is partially paralyzed after being shot in January, and claims in a federal lawsuit that ICE agents further injured him during the raid. According to the complaint, Catalan-Ramirez was targeted because Chicago police had labeled him a gang member. His attorneys say he doesn’t know how or when he ended up on the list.

An ICE spokesperson said she could not comment on the lawsuit.

For immigrant advocates, this cooperation between local police and federal officials shows how some cities that claim to be havens for immigrants — like Chicago — are anything but. “If Wilmer got turned over to ICE based on Chicago’s information, [it’s not] a sanctuary city,” said Tania Unzueta, legal and policy director for Mijente, a national organization focused on Latinx issues, and a volunteer with Organized Communities Against Deportations. Unzueta is currently working with several Chicago groups to obtain more information about the city’s gang list, including the criteria for being added. “I think we have an argument that it’s unconstitutional when there are such heavy consequences for something that doesn’t have a judicial process,” she said.

A spokesperson for the Chicago mayor’s office wouldn’t comment on the two suits or the city’s gang database and relationship with ICE, but said in an email: “Chicago will continue to be a welcoming city and stand up for the values that have made us a beacon of hope for immigrants and refugees from around the world for generations.”

Similar legal battles are playing out in other parts of the country. The American Civil Liberties Union filed a lawsuit in August over the evidence (or lack thereof) that ICE is relying on in Suffolk County, New York, to identify high school students as gang members. Law enforcement has labeled the plaintiffs members or associates of the MS-13 gang for doing things like wearing an El Salvador soccer jersey, being observed in the presence of other alleged gang members or writing El Salvadoran area codes in their notebooks. Local and federal law enforcement in Suffolk County have been focused on tracking down MS-13 members, who police say are responsible for 17 murders there in the last 18 months.

While ICE would not comment on the lawsuit, a spokesperson noted that individuals can be identified as a gang member if they meet two of eight criteria, which include wearing gang clothing or frequenting places known for gang activity.

“They’ll just arrest them based on an evidence-free allegation,” said immigration attorney Bryan Johnson, who represents some of the plaintiffs named in the ACLU suit. “They don’t have to share that information in court. There’s no process to challenge the allegations.”