Waiting for a Perfect Protest?

Our concern at this moment is with our moderate brothers and sisters who voice support for the cause of racial justice but simultaneously cling to paralyzingly unrealistic standards when it comes to what protest should look like. 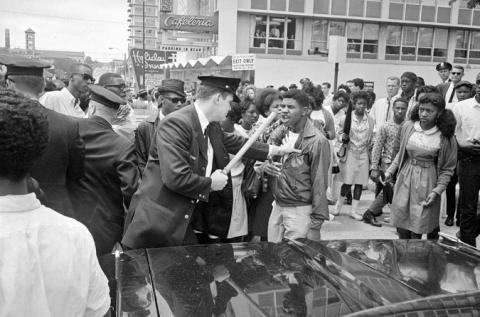 A demonstrator clashed with a policeman during a civil rights protest in Nashville in 1964. , Bettmann Archive/Getty Images

Media outlets and commentators representing a range of political persuasions have called attention to recent outbreaks of violence in Berkeley, Calif., Boston and other locations where anti-racist and anti-fascist demonstrators have gathered. Intentionally or not, they have often promoted a false equivalency between groups that advocate white supremacy and those that seek to eliminate it.

Even mainstream media outlets that typically fact-check the president seem to have subtly bought into Mr. Trump’s “both sides” narrative regarding right- and left-wing extremism. They’ve run headlines that highlight small violent skirmishes while ignoring the thousands who marched and protested peacefully, to say nothing of the injustices that inspired the protests.

Our complaint here is not about the right-wing media outlets that we know will continue to delegitimize anti-racist protest in any form — whether it’s peacefully sitting during the national anthem, marching in the streets, staging boycotts or simply making the apparently radical claim that “black lives matter.” Rather, our concern at this moment is with our moderate brothers and sisters who voice support for the cause of racial justice but simultaneously cling to paralyzingly unrealistic standards when it comes to what protest should look like.

As Christian clergy members, we place a high value on nonviolence. We are part of a national campaign that promotes proven solutions to reducing gun violence in our cities, and each of us has worked to achieve peace in our neighborhoods. But we know there has never been a time in American history in which movements for justice have been devoid of violent outbreaks.

Thanks to the sanitized images of the Rev. Dr. Martin Luther King Jr. and the civil rights movement that dominate our nation’s classrooms and our national discourse, many Americans imagine that protests organized by the Southern Christian Leadership Conference, the Student Nonviolent Coordinating Committee and countless local organizations fighting for justice did not fall victim to violent outbreaks. That’s a myth. In spite of extensive training in nonviolent protest and civil disobedience, individuals and factions within the larger movement engaged in violent skirmishes, and many insisted on their right to physically defend themselves even while they proclaimed nonviolence as an ideal (examples include leaders of the SNCC and the Deacons for Defense and Justice in Mississippi).

The reality — which is underdiscussed but essential to an understanding of our current situation — is that the civil rights work of Dr. King and other leaders was loudly opposed by overt racists and quietly sabotaged by cautious moderates. We believe that current moderates sincerely want to condemn racism and to see an end to its effects. The problem is that this desire is outweighed by the comfort of their current circumstances and a perception of themselves as above some of the messy implications of fighting for liberation. This is nothing new. In fact, Dr. King’s 1963 “Letter From Birmingham Jail” is as relevant today as it was then. He wrote in part:

I have almost reached the regrettable conclusion that the Negro’s great stumbling block in the stride toward freedom is not the White Citizens Councilor or the Ku Klux Klanner but the white moderate who is more devoted to order than to justice; who prefers a negative peace which is the absence of tension to a positive peace which is the presence of justice; who constantly says, “I agree with you in the goal you seek, but I can’t agree with your methods of direct action.”

National polling from the 1960s shows that even during that celebrated “golden age” of nonviolent protest, most Americans were against marches and demonstrations. A 1961 Gallup poll revealed that 57 percent of the public thought that lunch counter sit-ins and other demonstrations would hurt integration efforts. A 1963 poll showed that 60 percent had an unfavorable feeling toward the planned March on Washington, where Dr. King gave his “I Have a Dream” speech. A year later, 74 percent said that since black people had made some progress, they should stop their demonstrations; and by 1969, 74 percent said that marching, picketing and demonstrations were hurting the civil rights cause. As for Dr. King personally, the figure who current moderates most readily point to as a model, 50 percent of people polled in 1966 thought that he was hurting the civil rights movement; only 36 percent believed he was helping.

The civil rights movement was messy, disorderly, confrontational and yes, sometimes violent. Those standing on the sidelines of the current racial-justice movement, waiting for a pristine or flawless exercise of righteous protest, will have a long wait. They, we suspect, will be this generation’s version of the millions who claim that they were one of the thousands who marched with Dr. King. Each of us should realize that what we do now is most likely what we would have done during those celebrated protests 50 years ago. Rather than critique from afar, come out of your homes, follow those who are closest to the pain, and help us to redeem this country, and yourselves, in the process.

Michael McBride is a pastor and the director of PICO National Network’s “Live Free” campaign.

Traci Blackmon is the United Church of Christ’s executive minister of justice and witness.

Barbara Williams Skinner is a co-convener of the National African American Clergy Network.