Land Grabbing Responsible for Persecution and Refugee Crisis, in Myanmar and Central America

The extreme violence against the Rohingya in Myanmar (Burma) is closer to extermination than religious persecution. One key factor insufficiently recognized is the massive land grabbing that is happening in Burma and has now reached into the poorest state, Rakhine. Land grabbing has become a major factor in multiple displacements, including in Central America. Too many explanations stop short from seeing a larger economic vortex of land grabbing. 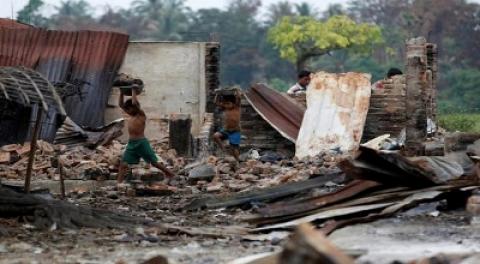 The deployment of extra troops last month to Myanmar’s troubled Rakhine state is to further the “Rohingya genocide”.,Caravan Daily

Is Rohingya Persecution Caused by Business Interests Rather than Religion?

Both Buddhist and Muslim smallholders have been victims of corporate land grabs in Myanmar. Is the focus on religion just a distraction? 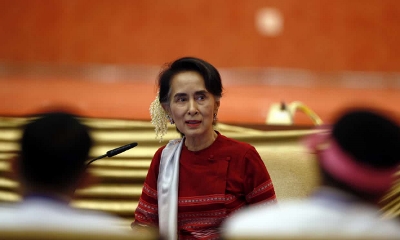 Aung San Suu Kyi requested that the US not use the term Rohingya.
Photograph: Aung Shine Oo/AP // The Guardian

In the last four years Myanmar’s Rohingya, a centuries-old Muslim minority group, have been subjected to sharply escalating persecution by the Myanmar army, and by a particular sector of extreme nationalist Buddhist monks. 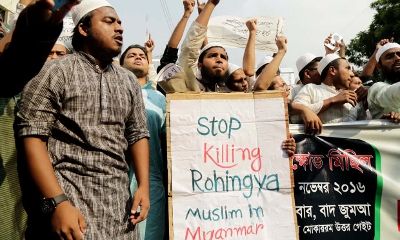 Protest in Bangladesh against attacks on the Rohingya
Photograph: Abir Abdullah/EPA // The Guardian
Against this background, the escalating displacement of millions of smallholders (mostly Buddhists) from the land was a major change as to who was to manage the land. Smallholders became refugees of a new economic ordering. Myanmar is not unique in this. Similar brutal expulsions of smallholders have been happening across the world as large corporations take over because they “establish” that the smallholders have no contracts showing the land is theirs, no matter how long they and their ancestors worked that land. What is different in Myanmar is the almost absolute control the military have long had over much of the country’s land, and hence their key role in the expulsion of smallholders (pdf).
Today there are whole new economies – mining, timber, geothermal projects – where before there were smallholders. Economic development may require this: but it should also work for the millions of displaced and never compensated smallholders. Foreign direct investment is now concentrated in extractive sectors and power generation. Not much of the new investment has gone to sectors such as manufacturing that can generate a strong working class and a modest middle class. For example, Myanmar’s Yadana pipeline project, “required investment of over $1bn (£0.8bn), yet employs only 800 workers”.
Furthermore, the 2012 law empowered foreign investors. It offered government loans – but no help for the smallholders who lost their land. Land properties can range from 2,000 hectares up to 20,000 hectares (5,000 acres to 50,000 acres) for an initial period of 30 years. The extent of land grabs is such that Myanmar is losing more than a million acres of forest a year (pdf).
Many, perhaps most, of the contracts signed for major land deals have their own conditions and effects. For instance, regional military commanders and non-state armed groups have de facto control over most land development in northern Myanmar.
Two parallel worlds
The Myanmar of brutal religious persecutions that has led to huge worldwide concern is only getting worse. But then there is the Myanmar of evictions of smallholders to make room for massive land grabs.

Since the first set of foreign investors entered the country, demand for land has become a major factor in conflict

Myanmar has become a last Asian frontier for our current modes of development – plantation agriculture, mining, and water extraction. Its location makes it even more strategic. Besides being the largest country of south-east Asia, Myanmar is between the two most populous countries in the world, China and India, both hungry for natural resources.
Since that first set of major foreign investors entered the country under the new legal regime, demand for land has become a major factor in conflict. Foreign firms have moved in, land grabs have risen, smallholders keep losing ground. Farmers have become poorer or lost their land. But the land market is booming.
Seen from this angle, persecution of the Rohingya has at least two functions, even if unplanned. Expelling them from their land is a way of freeing up land and water. Burning their homes makes this irreversible: the Rohingya are forced to flee and leave their lands behind. Secondly, a focus on religious difference mobilises passions around religion, rather than aiming, let’s say, at creating pressure on the government to stop evictions of all smallholders, no matter their religion.
Against the background of millions of expelled smallholders, it is remarkable how much religion has captured the attention of observers and commentators. In the meantime, a third of Myanmar’s vast forests are gone, and the government has allocated million of hectares, including a significant allotment in Rakhine state, for further development.
[Saskia Sassen is Robert S. Lind professor of Sociology at Columbia University, and the author of several books including Expulsions: Brutality and Complexity in the Global Economy.]
Land Grabs Are Partly To Blame For Skyrocketing Violence In Central America
Global firms and local elites are taking land from farmers, which pushes them to cities, where jobs are few.
By Saskia Sassen
January 16, 2017
Huffington Post 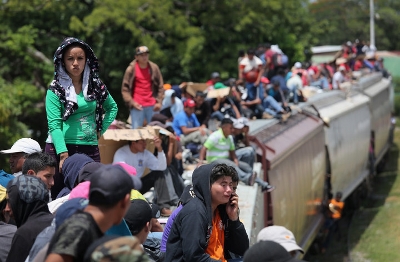 Thousands of Central American migrants ride atop trains, known as La Bestia, or the Beast, through Mexico to reach the U.S.
John Moore via Getty Images // Huffington Post
In 2013, San Pedro Sula in Honduras was the world’s murder capital, with a murder rate of 187 murders per 100,000 inhabitants, driven by a surge in gang and drug trafficking violence. Nationwide, the year before, Honduras’s murder rate was 90 murders per 100,000 people ― the highest in the world.
What’s behind this ongoing surge in gang and drug trafficking violence? The answer is multi-faceted but a key element has been overlooked again and again: Local elites and foreign corporations gained control over much of the land that could grow crops, forcing smallholder farmers off their land.
After a land grab, large cities are often the only places farmers and others from rural parts of the country can go. But the cities offer few economic options for the migrants, and in response, they too often are targeted by gangs that make up a murderous urban sub-culture. Thus, many Central American refugees showing up at America’s door are both refugees of urban violence and, before that, of land grabs.

Many Central American refugees showing up at America’s door are both refugees of urban violence and, before that, of land grabs.

Honduras is a prominent example. Land grabs accelerated there in the 1990s after the government passed the Agricultural Modernization Law, which privatized collective landholdings. This favored large landholders and destroyed the claims of smallholders, who typically do not have modern-style contracts affirming their land ownership. According to Tanya Kersson, author of Grabbing Power: The New Struggles for Land, Food and Democracy in Northern Honduras, a few powerful landowners grabbed more than 21,000 hectares in a short period between 1990 and 1994. This accounted for 70 percent of peasant lands in the Lower Aguan Valley, one the most fertile areas in the country and the site for much of the land conflict in Honduras.
Land grabs and violence against rural Hondurans have gotten worse since the 1990s. The 2009 military coup gave the large landholders even more flexibility in expelling small landholders from their land. The incentives for doing so also grew with the entry of rich foreign corporations and strong World Bank support. A prominent company called Dinant Corporation, which is owned by one of Honduras’s most powerful men, has been accused of killing over 100 peasants in recent years. Dinant is financed by the World Bank’s International Finance Corporation, supported by the U.N. Clean Development Mechanism and has links with global corporations like Mazola Oils.
Honduras is not the only country where this is happening. Large corporations have been taking control of rural land in many parts of the world over the last decade. That access is sometimes lawful but other times shadowy, and it is sometimes accompanied by brutal armed conflict against unarmed peasants. Globally, land grabs accelerated in the mid-2000s, putting a large number of smallholders in crisis. Large foreign corporations joined in, and there have been killings and terrorizing of smallholders who fight back. 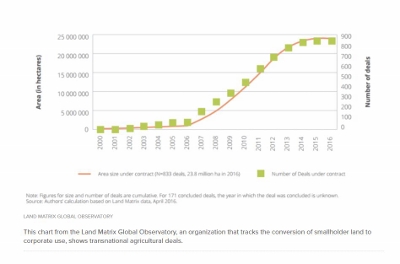 Much of what gets registered as “modernization and development” by governments and institutions like the World Bank looks very different to local peasants and local activists, journalists and scholars. They see environmental destruction and criminal activity. The companies do create some rural jobs but those workers are underpaid and overworked. The costs associated with some development projects have been known for years, especially in Honduras, where dozens of legal practitioners and human rights defenders, not to mention farmers and environmentalists, have been killed over the past few years. Many of these crimes remain unsolved.
The consequences of these rural expulsions are varied, and the connections with land grabs are rarely made. For instance, the U.S. Border Patrol was taken by surprise when 63,000 unaccompanied minors, most from Central America, crossed the southern border of the U.S. between Oct 1, 2013 and July 31, 2014. This was nearly twice the number of previous years. The explanation given by the children was “La Violencia,” referring to the violence in the cities. Fear led them to cross the whole of Mexico to get to the U.S. For most, their parents were dead or in prison. Neither the border patrol nor most analysts of this surge in unaccompanied migrant children connect La Violencia with the fact that many of their parents were forced from their land and fled to the cities.

Much of what gets registered as ‘modernization and development’ looks very different to local peasants.

Toward the end of 2014, the U.S. Border Patrol predicted up to 90,000 unaccompanied children would cross into the U.S. that year. The U.S. government asked Mexico to control its southern border to stem the flow of migrants from Central America. Between October 2014 and April 2015, Mexico detained almost 93,000 Central American migrants. Detention by Mexico’s guards at its southern frontier was brutal and put the U.S. in a dubious position. Washington eventually loosened the pressure on Mexico’s southern border detentions. So once again, the flow of Central Americans to the U.S. border, if they could make it that far, jumped sharply.
Countless individuals and families making this long trip have died, given up, stayed somewhere in Mexico or been kidnapped to work in plantations, mines or the sex economy. And these migrations are not likely to end. In addition to the violence, Honduras, Guatemala and El Salvador are among the poorest nations in Latin America with 21 percent, 11 percent and 4 percent, respectively, of their people living on less than $2 a day.
Little will be learned from all this as long as the explanation from entities, such as the World Bank, and other experts is focused on gang violence in poor areas of cities. La Violencia is out of control. But these cities were not always this way. Violence does not fall from the sky. It is made. In this case, it is made partly by large modern corporations that expel small farmers.
[Saskia Sassen is the Robert S. Lynd Professor of Sociology and Co- Chair of The Committee on Global Thought at Columbia University. She is the author of several books, which have been translated into over 20 languages. Her latest book is "Expulsions: Brutality and Complexity in the Global Economy" (Harvard University Press, 2014). She has received multiple doctor honoris causa as well as the 2013 Principe de Asturias Prize for the Social Sciences. She was chosen as one of the Top 100 Global Thinkers by Foreign Policy (2011), Top 100 Thought Leaders by GDI-MIT (2012) and Top 50 Global Thinkers by Prospect Magazine (2014).]
Many thanks to the author for sending these articles to Portside.
Subscribe to Portside