The discussions that have drawn Mueller's interest include President Trump's decision to fire FBI Director Comey and inaction after warnings about then-national security adviser Michael Flynn. 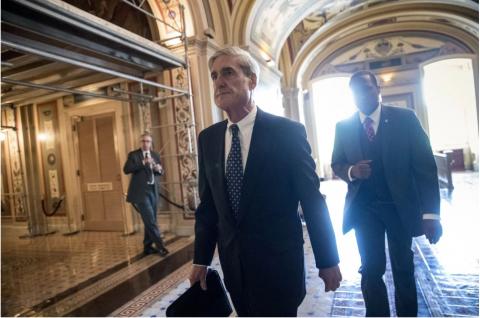 Special counsel Robert Mueller departs after a closed-door meeting in June with members of the Senate Judiciary Committee about Russian meddling in the election., J. Scott Applewhite/AP

Special counsel Robert S. Mueller III has alerted the White House that his team will probably seek to interview six top current and former advisers to President Trump who were witnesses to several episodes relevant to the investigation of Russia’s meddling in the 2016 election, according to people familiar with the request.

Mueller’s interest in the aides, including trusted adviser Hope Hicks, former press secretary Sean Spicer and former chief of staff Reince Priebus, reflects how the probe that has dogged Trump’s presidency is starting to penetrate a closer circle of aides around the president.

Each of the six advisers was privy to important internal discussions that have drawn the interest of Mueller’s investigators, according to people familiar with the probe, including his decision in May to fire FBI Director James B. Comey. Also of interest is the White House’s initial inaction after warnings about then-national security adviser Michael Flynn’s December discussions with Russia’s ambassador to the United States.

The advisers are also connected to internal documents that Mueller’s investigators have asked the White House to produce, according to people familiar with the special counsel’s inquiry.

Roughly four weeks ago, the special counsel’s team provided the White House with the names of the first group of current and former Trump advisers and aides whom investigators expect to question.

In addition to Priebus, Spicer and Hicks, Mueller has notified the White House he will probably seek to question White House counsel Don McGahn and one of his deputies, James Burnham. Mueller’s office has also told the White House that investigators may want to interview Josh Raffel, a White House spokesman who works closely with Trump son-in-law Jared Kushner.

White House officials are expecting that Mueller will seek additional interviews, possibly with family members, including Kushner, who is a West Wing senior adviser, according to the people familiar with Mueller’s inquiry.

Mueller’s probe is seeking to determine whether any Trump associates may have coordinated with Russia to influence the election. That investigation is also examining whether the president or others at the White House may have attempted to obstruct justice leading up to the firing of Comey.

“Out of respect for the special counsel and his process and so we don’t interfere with that in any way, the White House doesn’t comment on specific requests for documents and potential witnesses,” Cobb said.

No interviews have been scheduled, people familiar with the requests said. Mueller’s team is waiting to first review the documents, which the White House has been working to turn over for the past three weeks.

People familiar with the probe said the documents Mueller has requested strongly suggest the topics that he and his investigators would broach with the aides.

McGahn and Burnham were briefed by then-Deputy Attorney General Sally Yates on Jan. 26, days after Trump’s inauguration, about concerns in the Justice Department and FBI that Flynn could be compromised by the Russians. She warned that the FBI knew he was not telling the whole truth — to Vice President Pence and the public — about his December conversations with then-Ambassador Sergey Kislyak about U.S. sanctions on Russia.

Courts have held that the president does not have attorney-client privilege with lawyers in the White House counsel’s office, and their testimony about their Oval Office dealings can be sought in investigations.

Spicer had been drawn into the White House’s handling of the Flynn matter before the inauguration. After The Washington Post reported that Flynn had talked with Kislyak about sanctions, Spicer told reporters that Flynn had “reached out to” Kislyak on Christmas Day to extend holiday greetings — effectively rejecting claims that they had talked about U.S. sanctions against Moscow. A few days later, President Barack Obama had announced he was expelling 35 Russian “intelligence operatives” in response to the Kremlin’s meddling in the U.S. election.

After Obama’s announcement, Spicer said Kislyak had sent a message requesting that Flynn call him.

“Flynn took that call,” Spicer said. But he stressed that the call “centered on the logistics of setting up a call with the president of Russia and [Trump] after the election.”

As chief of staff, Priebus was involved in many of Trump’s decisions, including the situations involving Flynn and Comey. Comey told the Senate Intelligence Committee in June that Priebus was among a group of White House aides whom Trump instructed to leave the Oval Office before he asked the FBI director to drop the inquiry into Flynn.

Hicks, who is now White House communications director, and Raffel were involved in internal discussions in July over how to respond to questions about a Trump Tower meeting that Donald Trump Jr. organized with a Russian lawyer during the presidential campaign in June 2016. The two communications staffers advocated being transparent about the purpose of the meeting, which Trump Jr. had accepted after he was offered damaging information about Hillary Clinton that he was told was part of a Russian government effort to help his father’s campaign.

Ultimately, according to people familiar with the discussions, the president dictated language for the statement that his son would release to the New York Times, which was preparing a report about the meeting. The response omitted important details about the meeting and presented it as “primarily” devoted to a discussion of the adoption of Russian children.

CNN first reported Thursday that Mueller has sought interviews with White House staffers related to the preparation of that statement but did not name them.

Matt Zapotosky contributed to this report.

Ashley Parker is a White House reporter for The Washington Post. She joined The Post in 2017, after 11 years at The New York Times, where she covered the 2012 and 2016 presidential campaigns and Congress, among other things.  Follow @ashleyrparker