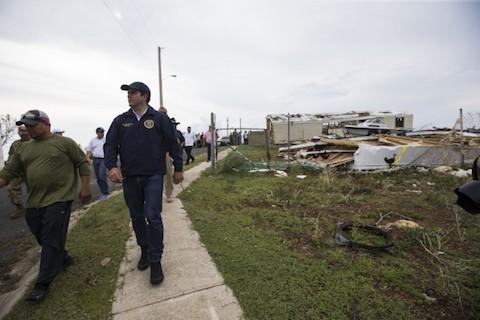 Irma, the largest Atlantic hurricane in recorded history, has proven cruelly fickle as it surges through the Caribbean. The Category Five storm “hit like a bomb” on the small islands of Barbuda and St. Martin, destroying up to 95 percent of the structures and rendering the areas “barely habitable.” But Irma stayed north of Puerto Rico, sparing the island from the worst.

That’s not to say that Puerto Rico didn’t sustain damage. Three people died, according to Governor Ricardo Rossello, and nearly one million households are without power. That’s about two-thirds of all electricity customers on the island, and the outages could linger for up to six months, according to a preliminary report released before the storm hit. Backup generators have only about 40 percent of the hospitals operating. Persistent rains—up to 12 inches in parts—could make flash flooding the biggest ongoing danger. And this is seen as a dodged bullet!

These are tragic outcomes for everyone in the Caribbean. But Puerto Rico has a special burden—its massive debt crisis, and the ravages that years of austerity measures are taking on its ability to engage in emergency response.

Faced with $74 billion in debt and mired in a bankruptcy-style court battle, Puerto Rico has no ability to speed aid to its 3.4 million residents without help from the U.S. government. The island’s own emergency fund only has a bare $15 million in its coffers. International credit markets are locked due to the debt crisis. A fiscal control board maintains tight control over budgets and has soured on practically every expense the government has wanted to make since its inception. The biggest need after a storm of this magnitude is resources; Puerto Rico doesn’t have any.

President Trump signed a disaster declaration for the territory on Tuesday, freeing up FEMA to assist in any local efforts. But that assistance is for search and rescue, public health and safety, and debris removal. It doesn’t encompass rebuilding or even restoration of power. All that would have to go into a supplemental funding measure, at a time when Congress will have its minds on relief for Texas and Florida residents.

Then there’s the issue of emergency preparedness. One reason why the state-owned Puerto Rico Electric Power Authority (PREPA) expects months of delays in restoring service is that the entire operation is “vulnerable and fragile,” an assessment from no less than the director of the utility. The infrastructure is in dire need of upgrades and repairs, such that a tentative deal with creditors in April (since abandoned) earmarked $2.2 billion in capital improvements. The utility union has accused PREPA of deliberately neglecting upkeep because of budget cutbacks. That deferred maintenance bites hard now. Power started failing and utility poles fell into the streets before Irma even hit; in fact, 65 percent of the island’s municipalities experienced blackouts in the first three weeks of July, according to a state representative.

Plus, imported oil fuels the generators at the electricity plants, and there’s no guarantee, with multiple hurricanes in the region, that ships will be able to deliver to the island. PREPA announced a 240-megawatt investment in solar last month, but that doesn’t help for the time being.

No power in Puerto Rico creates a spiral of disasters. Lack of cell phone service makes emergency response hard to contact. PREPA supplies power to both potable and wastewater pumping stations. Essential infrastructure sits on the coast, making it more vulnerable to the effects of flash flooding. And there’s another hurricane, Jose, expected to hit the region in the coming days, possibly creating an additional storm surge.

The biggest shortage may be manpower. Residents fleeing the debt crisis have left the workforces at PREPA and other authorities down to a skeleton crew. Virtually every part of Puerto Rico’s government that will be relied on in Irma’s aftermath is underfunded. Billions of cuts went through these agencies in the past couple years. Just last week, the fiscal control board sued Governor Rossello, for failing to conserve funds through public employee furloughs and a 10 percent cut to public pensions. Would the control board possibly be so short-sighted as to furlough public employees during a disaster?

The black clouds hanging over this disaster are the hedge funds—“vultures” in the vernacular of the island—that hold Puerto Rican debt. Most of these investors, like DoubleLine Capital’s Jeffrey Gundlach and Paul Singer’s protégé Mark Brodsky, scooped up the debt at a severe discount, and have engaged in ruthless tactics to get Puerto Rico to pay in full, earning themselves a giant payday in the process. These bondholders have criticized the control board for not inflicting more severe austerity measures against Puerto Rico, even as the island buckles under the cutbacks.

Now the island will need massive infusions of capital to rebuild. The hedge funds have the wealth to provide it, and have reaped more than enough profit from the picked carcass of Puerto Rico that they can easily afford to give something back. But somehow I don’t expect Puerto Rico relief will be a major topic of concern in the executive suites on Wall Street. The hard-hearted business decision to capitalize on suffering isn’t likely to soften now.

Finally, this tragedy shows the short-sightedness of getting a fiscal house in order when the rest of the house is falling apart. Puerto Rico needs an economic revival, one that forced austerity will simply not provide. The persistent focus on the budget made the island more vulnerable to pain from natural disaster, and the intransigence of the creditors will make recovery agonizingly slow. The Puerto Rican people have long deserved better than this.