Hospitality union UNITE HERE represents more than 3,000 restaurant and hotel employees in the greater Houston area, and around 250 of its members have experienced “catastrophic losses,” according to Texas organizing director Danna Schneider. UNITE HERE arrived soon after Harvey made landfall, and the organization has since been delivering groceries and checking up on its members. 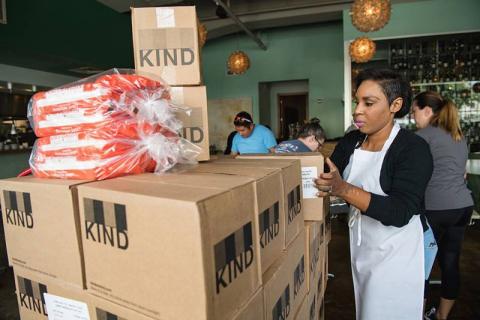 Thi Dam, who just started as an assistant at South African restaurant Peli Peli’s corporate office three weeks ago, saw water pouring into her vehicle and apartment on August 25, in the hours after Hurricane Harvey made landfall in Houston. “We woke up and the water had risen to the middle of the first floor,” Dam says. “We started packing our things and went to a friend’s apartment on the third floor, but it kept raining heavily and the water kept rising. I saw helicopters and boats coming to rescue the residents, and that’s when I felt so panicked and scared. We had to wait 12 hours for our turn to get to higher land.”

Dam was one of more than 9,000 Harvey evacuees sheltered at the George R. Brown Convention Center in downtown Houston, where volunteers from the American Red Cross and other relief organizations centered their efforts. When Dam returned to her apartment a few days later, it was totally destroyed — the walls were falling down, furniture was broken, rooms were infested with insects and covered in mud.

Dam’s story isn’t uncommon. The devastation in Houston is extensive: At one point, somewhere near 85 percent of the city was under water. At present, Harris County officials estimate that upwards of 136,000 homes were damaged in the storm. Harvey’s economic impact in Houston is expected to top $180 billion, and those numbers are rising. And restaurant employees — nearly 330,000 Houstonians work in the leisure and hospitality industry — are particularly vulnerable in events like natural disasters, especially when restaurants are forced to close their doors en masse.

Texan servers, the majority of whom are paid the federal tipped minimum wage of $2.13 per hour, can’t earn tips when a restaurant’s doors are closed — or when people can’t afford to dine out. Most back-of-house employees are paid on an hourly basis, which means that wages lost during a restaurant closure can be financially disastrous. Health insurance coverage is also woefully lacking in the industry, resulting in steep medical bills and the prospect of being unable to return to work for an extended period of time if injured in the storm.

Considering this lack of infrastructure, much of the burden in assisting these employees has fallen on restaurant owners. According to Dam, it was an employee at Peli Peli that called the emergency truck that eventually rescued her; after returning to her mud-covered apartment and collecting everything that was still usable, she was offered refuge in the home of one of her coworkers.

At Peli Peli, owner Thomas Nguyen has been busy establishing a game plan for helping his employees get back on their feet — all while re-opening his three Houston-area eateries, feeding first responders, and preparing food for shelters. “We anticipate that a substantial number of our hourly employees will have issues making ends meet at the end of the month,” Nguyen says. “We are hoping to pay 80 percent of hourly pay for this week, and setting up grants and loans for our teams.” According to Nguyen, those loans would be interest-free, and repaid on a timeline that fits each employee’s needs. Along with financial and housing assistance, Nguyen is also working on finding loaner vehicles for employees left without cars.

“I love that place to the moon and back because of everything they do,” Dam says. “Witnessing the way they care for each individual touched and melted my heart. They kept calling and texting to make sure I was safe, gave me clothes and hugs. I truly appreciate now why they call their employees their family members.”

Isis Hernandez-Lopez, a student at the University of Houston and employee at Burger-Chan, faces a different, though pressing, problem. Hernandez-Lopez’s home is safe, but her vehicle was totally destroyed in the flooding. “The water reached more than halfway up my car, and there was really nothing I could do about it,” she says. “It looked like a river, basically. Every car in my apartment complex’s parking lot was full of water, and the only way anyone could reach their car if they wanted to was by swimming to it.” While she watched her car flood, Hernandez-Lopez took in a next-door neighbor and her one-month-old child, who left their apartment after the waters were neck-high.

Unlike other cities with robust train networks and public transit infrastructure, Houston is a car city, and it’s difficult for many employees to get to work without wheels. The city also occupies a massive geographic area, more than 639 square miles, including a number of densely populated suburbs. The lack of public transit often affects restaurant industry employees: In April, a staffing manager at employment agency Robert Half International told the Houston Chronicle that multiple job candidates cited not being able to afford a car or housing near the city’s buzziest neighborhoods as reasons why they’re struggling to find work.

Post-Harvey, Hernandez-Lopez felt equally supported by her employer. Even though she’s currently without a vehicle, Burger-Chan’s owners have kept in touch, and reassured her that her job is waiting for her. “Diane and Will [Feng] have been so supportive and kind throughout this whole situation,” she says. “They made sure that we had enough food throughout the days we were stuck at home, and have also given me some time to try to get back on my feet and find a means of transportation before I head back to work.” Right now, Hernandez-Lopez is raising money on GoFundMe to buy a new car.

Hospitality union UNITE HERE represents more than 3,000 restaurant and hotel employees in the greater Houston area, and around 250 of its members have experienced “catastrophic losses,” according to Texas organizing director Danna Schneider. UNITE Here arrived soon after Harvey made landfall, and the organization has since been delivering groceries and checking up on its members.

Once those immediate needs are met, though, UNITE HERE’s long-term goal is to ensure that its members are treated fairly by their employers after the storm. “We certainly will not stop fighting until it is true that nobody loses their job because they couldn’t get to work or because of some residual effect of this disaster,” Schneider says. “Depending on what the employers do, we’re preparing to provide step-by-step assistance for unemployment benefits if the employers don’t pay lost wages. We’re going to go person-by-person to 3,000 people to make sure they can get through that process.”

Outside of massive hospitality operations and chain restaurants, even smaller restaurants have measures in place to ensure that their staff can stay afloat even if the doors are closed. Jennifer Caswell, who runs multiple restaurants in Houston with her husband Bryan, notes that her restaurants have taken out business interruption insurance, which ensures that employees get paid even if they’re not working.